Well, Praise the Lord! But, more to the point, praise the cast, director, and choreographer of the blessedly outrageous rock-and-soul show at Chanhassen Dinner Theatres. Altar Boyz is a stretch for Chan—dare we say a Miracle of Faith?—vaulting from safe, suburban musicals into the snarky realm of suggestively loaded rock-band songs and moves in this send-up of boys’ bands (particularly those of the smarmy Christian genre) that you’d expect to be staged at Brave New Workshop, rather than in a red stretch of the metro. Bravo to Brave New Chanhassen: The show’s an unadulterated winner! If you fail to buy a ticket, a dozen Hail Dollys is your penance. 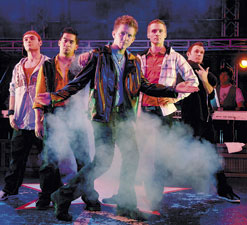 Originating Off-Broadway in 2005 with book by Kevin Del Aguila, and songs by Gary Adler and Michael Patrick Walker, the parody creates the last stop of a Christian boys’ band’s “Raise the Praise” tour via 12 nonstop music/dance numbers spoofing primarily pop-rock, with some power ballads, Latin rhythms, hip-hop, and rap added to spice the musical potluck.

“Do you know who’s in the house?” they ask their “fans” (that’s us). “God! Is in the house!” they begin, continuing in the footsteps of the original rock star who “changed water into wine.” The quintet belt, “We’re gonna alter your mind,” driving home the point with plenty of pelvic action.

The group is composed of over-the-top boy archetypes with Gospel boldface names: Matthew (Ben Bakken as an LA-type operator); Mark (Brian Skellenger as queen of the group); Luke (Matt Lafontaine as a muscled street boy); and Juan (Eric “Pogi” Sumangil as a Latino—get it?). There’s also Abraham (Brian Winter as a nice Jewish boy, thrown in just to make sure no group is spared its gentle spoofing).

“The Old Guy is making a comeback!” they sing and prance, abetted by lyrics that attest, “Jesus called me on my cell phone; Jesus paged me on my beeper.”

While Juan seeks “la vida eternal,” supergay Mark comes out onstage, bravely singing, “I am…a Catholic! It’s what I am. It’s not a choice. Out of the cloister, and into the street…Show your pride!” Later, a hetero professes his own sensuality in a number called “Girl, You Make Me Want to Wait.” OK, it’s all hilariously downhill from there, till the boys finally “get the Hell out of town.”