The signs were not good. Team Spatula—my partner, Chad; my friend, Mona; and I—had not made all the training rides to prepare for AIDS Trek XXII. The “Pink Dragon,” Mona’s bicycle, was out of commission at the last moment—she used her daughter’s bike. Then, I took a spill moving a lawn sprinkler, crashing down on a slab of cement. A cracked elbow, cracked ribs, and torn-up kneecap later, I yearned for a better story to tell that involved a bicycle accident—or too much wine. Alas, I simply had tripped over a rain gutter. 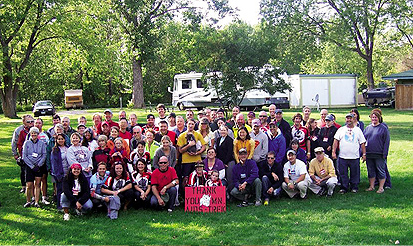 No matter Team Spatula’s condition, the event took place the first weekend in September. The ride, 180 miles from the Twin Cities to Duluth, is not one giant continuous route, but is spread out over two days, with an amazing support crew.

The trek began in the parking lot of the National Sports Complex in Blaine. Riders completed registration, and turned in extra donations, snacking on assorted fresh fruit, energy bars, juice, Gatorade, and water.

Chad and Mona were chomping at the bit to get on their way, which they did promptly at 8 AM. I drove on Highway 61 to Wyoming—Pit Stop 2—to cheer on my team and other riders. The crew had lots of snacks to provide energy, and beverages to refresh riders. Gatorade was probably the most popular. Each pit stop is fun, with cheering, welcoming signs, and medical aid should one need it.

At North Branch, lunch was served in a park to riders and crew, which consisted of deli ham, turkey, cheese, buns, condiments, salads, chips, dessert, and beverages. It was a perfect warm and sunny day to picnic before setting out for the next 40 miles.

Pit Stop 4—the Dairy Queen in Pine City—is everyone’s favorite. Both riders and crew are given coupons for a free medium DQ cone.

The last stop on Day One is at Hinckley, 15 miles away, so I drove to the Hinckley Casino Camp Ground to cheer in the riders.

Chef Sean Divine has been with The Aliveness Project for five-and-a-half years, and cooks five meals a week for it. He also caters the HIV Community Picnic.

Divine made supper—spaghetti noodles, tomato sauce, and large meatballs—for riders and crew. It was yummy, satisfying everyone.

“This is my first year as chef for the AIDS Trek,” Divine shared. “Some members of the Team Aliveness asked me to participate.”

When asked how long it takes him to prepare for an event like the AIDS Trek, Divine responded, “It took me about five hours to prepare for both lunch and dinner.”

After dinner, group games began for everyone, but Team Spatula was anxious to go to the hotel to take advantage of the spa and pool. Plus, I had packed a little snack of artisan cheeses, crackers, and red wine for playtime.

The following morning, we were up, and ready to rock. Even though the literature explains that the AIDS Trek is a ride, not a race, Chad and Mona decided to try to be the first to arrive in Duluth. I hardly could get them to eat breakfast.

A hot breakfast of sausage links, sausage patties, two types of scrambled eggs, oatmeal, yogurt, fresh fruit, and juice was ready around 7 AM. Divine and his volunteer assistants (Trisha, Buffy, and Kristi) made sure everyone was well-fed, and ready for another full day of riding.

Although Divine was extremely busy, he offered this answer when asked about his training: “I started chef’s school about 10 years ago. I attended William Angliss Institute of TAFE in Melbourne, Australia, for three years, while apprenticing at my aunt and uncle’s restaurant in Victoria.”

It started to rain right before lunch, which was served in Barnum in an enclosed shelter in the park with a fireplace—cozy and dry.

I stopped at Pit Stop 4 in Atkinson to cheer on the riders, as the rain became heavy. Most didn’t stop. I had picked up hot coffee not only for Mona and Chad, but also for our new friend, Andy Ansell, who earlier had been enjoying espresso in a little packet NASA-style. That just wouldn’t do.

The finish line was at Indian Point Campground at the end of the Munger Trail. Setup for the celebration barbecue was starting as I drove up. The sun came out just in time for the festivities to begin. Everyone was in a glorious mood. Not only had they completed the ride—raising thousands of dollars, of which 100 percent goes to the beneficiaries—but for two days, helped create a utopia of friendship, sharing, and common affection.