In a decade of great musicals, Grey Gardens ranks way up there—nominated for 10 Tony Awards in 2007 and winner of three. Its area premiere—a coproduction of St. Paul’s Ordway Center for the Performing Arts and Park Square Theatre—is one of the smartest partnerships ever between two local arts organizations. Given the high quality of both, and the timely relevance of the production, it’s clearly one of the major theatrical events of recent years. 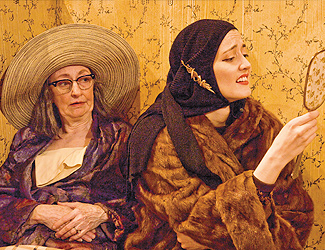 As well, Grey Gardens follows recent towering local successes by two of the show’s creators: lyricist Michael Korie and playwright Doug Wright. In 2007, Korie wrote the libretto for Minnesota Opera’s world premiere of The Grapes of Wrath, perhaps the greatest opera of the decade. In 2006, Jungle Theater extended its run of Wright’s Pulitzer Prize-winning I Am My Own Wife.

Grey Gardens portrays the true-life situation of “Big Edie” Bouvier Beale and her daughter, “Little Edie,” respectively, the aunt and cousin of Jacqueline Bouvier Kennedy Onassis. All three women had passed away before the musical was created. Act I takes place in 1941 at the Beales’s Long Island mansion, from which the musical gets its title. Act II moves to 1973, when the place has gone to wrack and ruin, with feral creatures and cats running around. Worse yet, the mother and daughter, members of the American aristocracy, still are living there, cooking on a single burner in a bedroom!

As Baldwin shares, “It’s great, but it’s daunting, because the women are such cult favorites.”

Baldwin refers to the beloved 1975 documentary Grey Gardens, from which the musical draws material and channels spirit. This Maysles Brothers film reveals the women’s humanity, never mocking or trivializing them. Comparisons have been made between the two real Edies and the high-flown figures of Tennessee Williams. That said, you don’t need to view the doc before seeing the musical.

Moreover, the women’s story makes you realize that even if you top the social register, you still can be trapped hopelessly in your identity, both psychologically and socially. For instance, the Edies both are fixated on the archaic and soul-killing necessity of “marrying well,” especially fascinating now in light of the same-sex marriage debate, and a half-century of increasing heterosexual divorce rates being acceptable.
Ordway Artistic Director and Vice President of Programming James Rocco, the production codirector, says that though Big Edie and Little Edie are “very eccentric characters, they are also very real, and in touch with what’s going on in their minds. They have been exposed to extremes of life. They were exposed to absolute high society—having everything you could ever wish for, dreamed of. And then, they were exposed to what it was like to live on a dime.”

Yet another example of Grey Gardens’s timely relevance is that since its Broadway opening not three years ago, we’ve seen economic collapse and expanding homelessness.

As Baldwin reflects, “I always feel that every one of us is just one decision away from a cathouse. So, for me, it’s always about not looking at them as specimens that aren’t real. However, being captured in a [documentary] movie format, you start to think, ‘Oh, they’re larger than life’—as something that’s not real. But they’re extremely embedded in reality. It’s frightening and calming to know that this is a possibility for any person. So, when you think that way, it’s not so hard to know where they’re coming from.” 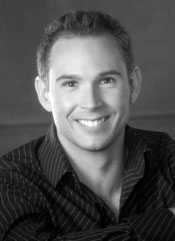 Indeed, our contemporary reaction to these harmless women’s vibrancy is to classify them as deranged, and either medicate and/or incarcerate them. Theatrically, it’s tempting to distort them into camp, or moralistically to relish their fallen state like Jehovah intoning, “Oh, how are the mighty fallen.” But they’re far more complex than that, as is the social hierarchy by which they were shaped and abandoned.

Codirector Jayme McDaniel observes, “These women are not camp. This is who they are. This is how they lived their lives. The psychology in the dialogue is truly amazing. There’s a mixture of humor, humility, and at times a true resentment toward each other.”

Hence, Lehr, who plays Big Edie in her 70s, calls her approach to the role “an evocation rather than an impersonation.”

Having probed the script and watched the documentary several times, Lehr goes back and forth about whom she sides with: “What you come away with is that this is a real mother/daughter relationship. And mother/daughter relationships are never easy. This one is so cool, because neither of them edits very much. My God, sometimes, they just say terrible things to each other, but they don’t play their barbs for keeps. I think that you get from watching them that there is an unconditional love between the two of them.”

Baldwin adds, “Their relationship and personalities are not as far away from ourselves as we would like them to be. We have this strange American need for own royalty—not only to put the royalty on a pedestal, but to knock the pedestal down from underneath them. It’s this weird, weird thing: the basis of reality shows; the basis of our obsession with celebrity.”

Music director Raymond Berg explains that composer Scott Frankel’s “music at the beginning of the play exudes success, leisure, youth, and promise. As the facade of success falls apart for the Beales, the music itself becomes the vehicle for shocking news, shocking emotional outbursts, and ultimately the demise of their perfect world. You can hear in these songs the angst and distress that Edie, her mother, and Gould—their onsite composer/accompanist—experience as their world crumbles. The music exists in a world that is sentimentalized, but at the same time, curiously honest and raw.”

“The raw, naked quality is highlighted in the second act, when the music becomes a psychological character, commenting on both mother and daughter’s obsessions with their past successes and current condition. In the song ‘Around the World,’ for instance, the music alternates between a stormy passage in which Edie vents her anger towards her mother and a music box waltz where she shows her mementos. The music of Act Two is emotionally jagged, and moves me to recognize the humanity of these singular, eccentric people.”

The partnership between Ordway and Park Square has been a waltz of sorts in itself. When Rocco moved to St. Paul three-and-a-half-years ago, a mutual New York friend put him in touch with Park Square Artistic Director Richard Cook. Serendipitously, it turned out the two lived in the same building. They became fast friends. 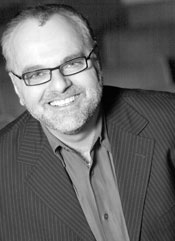 As Rocco recalls, “Believe it or not, at our very first conversation, we talked about Grey Gardens!”

Fortunately, for the two theaters, it was an ideal concept on many levels.
Cook stresses his part in focusing “on merging artistic forces—the creators and artists themselves—and on combining audiences, which can broaden the audience for any one work beyond what either organization is likely to attract on its own. So, if the Ordway and Park Square collaboration reaches its attendance goals, the Ordway will fill the highest percentage of seats of any recent long-run Ordway McKnight Theatre production, and Park Square will have three times the capacity of a standard four-week Park Square run.”

According to Ordway President and CEO Patricia Mitchell, “Analysis of our two subscriber lists showed that there was virtually no crossover, so it seemed a logical and productive way to cross-promote our institutions.”

Park Square Director of External Affairs Michael-jon Pease describes his role as “a bridge between the two sets of marketers, graphic designers, and publicists, doing what I can to assure the best ideas between each team are incorporated into the plan.”