A “Sordid” Life: An Interview with Rue McClanahan 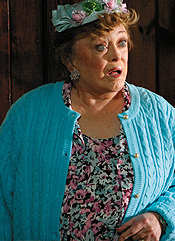 With the royalties the 74-year-old McClanahan reaps from the still-popular sitcom—broadcast daily around the world to roughly 1.2 million viewers—you’d expect that the Healdton, Oklahoma, native would be eager, at such a tender age, to sit back and count her cash.

Au contraire. The saucy septuagenarian continues to take on surprising—and sometimes scandalous—new roles. Her latest? Peggy Ingram, the matriarch of a colorful, crooked Texas clan in Del Shores’s Sordid Lives: The Series—based on his 1999 feature-length cult classic of the same name—that premiered July 23 on Logo.

In this new interview, McClanahan talks about her long-awaited return to series television; the gigs that got her there; fan mail from convicts; the problem with Shreveport, Louisiana; her brave battle with breast cancer; her steamy Sordid Lives sex scenes; and the on-set drama that’s making everyone uncomfortable.

It’s dish that Rose, Sophia, and Dorothy definitely would be down for.

You’ve been in show business for a long time. I won’t take you all the way back to the beginning, but I did read somewhere that while you were playing maniacal nanny Caroline Johnson on Another World, a fan sent a letter advising you on the best poisons with which to kill the character Pat. That’s kind of frightening, to say the least, but what other sort of scary letters have you received over the years. Any one that comes to mind?

No, that’s the only one. That was enough. I got some letters from some convicts when I was doing Golden Girls, but I didn’t answer them. I’m not sure it would have been safe.

Speaking of Golden Girls, there’s no question that you’re best-known for your role as Blanche Devereaux. How did that affect your life?

It gave me a lot more self-confidence. I realized that she thinks she’s the cat’s meow, crazy about herself, very outgoing, thinks that she’s beautiful. I figured, I’m playing the part—why don’t I start feeling that way, too. I became much less shy.

At what point during the Golden years did you know that the show had made its mark on television history?

Several years ago. It started running in reruns in 1988, and it hasn’t stopped since. It dawned on me then that this might be an ongoing proposition.

In the mid-1980s, talk of homosexuality on TV was quite taboo—and even today, the introduction of a gay story line creates a lot of buzz—but Golden Girls was a pioneer for gay issues way back then. Why was the show so committed to these issues?

I think because maybe we could get by with so much. I heard Betty White say this so many times: “Four old broads are so nonthreatening.” We could do and say a lot of things that shows with younger actors couldn’t.

You have quite a knack for playing excessive Southern women, but in your new role as Peggy Ingram on Logo’s Sordid Lives: The Series—which marks your return to series TV—your character is way out there, much different than anyone you’ve played before. Considering that this role is such a departure from how we’re used to seeing you on TV, what made you decide to take on this project?

[Series creator] Del [Shores] sent me the script back in November. When I read it, I said this is the best thing I’ve read by far. It was a very funny script. Peggy is a departure, but, of course, she turns into a sexy maniac. But she starts out as a church mouse—never had a drink of beer, married to the same man for 34 years, never had an orgasm. It’s about the growing up of Peggy, her blossoming. And she’ll grow up even more. In the second season, Del has so much up his sleeve. Peggy starts out really boring, quiet-spoken, carrying her little purse in both hands. But she goes to the beauty parlor in the 11th week, and wants to go blond—platinum. God knows what will happen in the second season.

Had you seen the movie prior to receiving the script for the TV series?

No, I received the script, then got the movie, and watched it. I guessed that it had been directed by Del. Thank goodness. He’s just wonderful to work with. Almost all the people are wonderful to work with. There’s one person that isn’t awfully popular, but I won’t get into that right now. But most everyone is professional and cooperative. There aren’t any prima donnas. Well, except that one person.

Behind-the-scenes drama? I love it! I hear, too, that you have a steamy sex scene. And details? Would Blanche approve?

I have several steamy sex scenes—they’re wild and raucous. I suppose Blanche would probably approve. I also have a very sweet love scene. Blanche would be envious, if anything.

The series debuted on Logo on July 23. But before the show becomes this summer’s guiltiest pleasure, what can you tell me about life on set? Any juicy details?

I think most of the juice is on the screen. But we were living under difficult conditions: bad food, low budget, long hours. Shreveport is a pretty redneck town, and there aren’t very good places to stay. We were working out of trailers, and during filming, I was undergoing physical problems. I was dealing with a knee surgery that was only six months old. It was all swollen, and there was a lot of limping. I was not at all happy with how I felt or how I looked, so for me, it was very difficult.

Like so many women, you bravely battled breast cancer, and beat the disease. What’s your health status today, and to what do you attribute your cancer recovery?

Excellent. I’m getting very, very healthy. Currently, I’m at the Hipprocrates Health Institute in West Palm Beach, on a raw food diet. I attribute my recovery to my husband, Morrow Wilson. His support helped me through it. We had just met when I was diagnosed. He’s a brave man.

All right, so, you’re 74 years old, and you’ve been working all your life, bringing joy and comedy to so many people around the world, but at some point, don’t you just want to sit back and relax?

No, I want to work. Working is life—acting, writing. I like to write. I love acting in good things. I just shot a Hallmark movie with Ed Asner called Generation Gap that will premiere in late October. It’s things like that that keep me young. I don’t want to retire.