In the 1970s, there were the good tapes and the bad tapes. Of course, the bad ones were President Richard Nixon’s. The good ones were Michael Bennett’s.

The out gay choreographer/dancer gathered several of his fellow dancers in New York to tell their personal stories. The tapes of these sessions, released only recently, are part of the soaring new documentary Every Little Step. By sharing his own experiences, joys, and heartaches, Bennett created a safe space for the other dancers, who were of various sexual orientations, to follow suit. 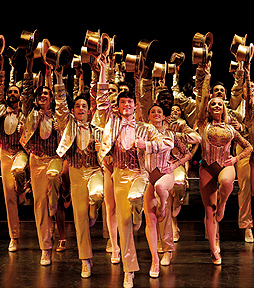 The result was one of the most popular and innovative Broadway musicals ever: A Chorus Line, now at the Orpheum in its Broadway revival national tour, presented by the Hennepin Theatre Trust.

Quick note: If you’ve seen the movie but not the show, you have not seen A Chorus Line. The film is quite lacking. The stage version is awesome.

When the show won nine Tonys and a Pulitzer in 1976, it was unthinkable that it had not come from a standard written book (musical theater parlance for “script”), and that it was played on essentially a bare stage. That a Broadway show, rather than some experimental piece, could get away with this was out of the box. Plus, A Chorus Line was the first musical ever to win the United Kingdom’s Olivier Award for Best Musical. It is to the Olivier what Wings is to the Oscar.

A Chorus Line, which could be said to have been approached experimentally, was worked and developed from the tapes starting in 1974 at New York’s Nickolaus Exercise Center, then at New York’s Public Theater, and finally on Broadway in 1975.

It’s a savage look at how dancers work like oxen, getting paid a pittance, and put their hearts, health, and youth on the line—or, as one of its greatest tunes puts it: “What I Did for Love.” And “love” means going from audition to audition, while going to dance class after dance class, in hopes of getting that one job, maybe that one last job, to dance. You don’t dance because you’re going to make a lot of money, or become famous—you dance because you love it, and you’re driven.

A Chorus Line was an astoundingly risky labor of love for composer Marvin Hamlisch, who left Hollywood not only at the height of his popularity, but also at an apex of acclaim known by few film composers before or since. He just had won Oscars for his score adaptation of The Sting, and for the title song of The Way We Were. Both films were astronomical successes. Hamlisch was a household name nationwide.

Hennepin Theatre Trust President Tom Hoch says, “Audience members have always related very personally to the actors’ struggles, joys, fears, insecurities, and hopes. Who among us has not put themselves ‘on the line’ for a job, for a relationship, for a dream?”

A Chorus Line’s struggles center on of the female beauty myth, harsh economics, and being gay in a heterocentric world. Its breakthrough gay monologue, delivered by Paul, who largely was drawn largely from dancer Nicholas Dante, is heart-wrenching.

Bryan Knowlton, who plays Paul at the Orpheum, shares that the show “truly explains all the trials and tribulations a dancer goes through to land a gig. He stands there for about 10 minutes, explaining how he got to be where he is. He then proceeds to break down because of a realization. His family is the closest thing to love and support that he has, and the disapproval of being gay or in drag to his mother and father is devastating. But in the end, you get to see how brave he is. That, for me, is so gratifying. Paul challenges me to let go of the past, to be proud of who I am: a gay dancer, son, nephew, brother, friend, boyfriend. He is love; he is experience; he is heartfelt; he is joy; he is strong. I hope every person can experience this cast of amazing characters, and perhaps find a bit of themselves yearning to be on the line.”