As you’d expect, 8Ball Theatre’s 3 Way: A Sex Farce is drawing in the crowds and deservedly favorable reviews. The piece rightly is hailed as fun and fabulous entertainment, which it definitely is. But 3 Way is actually a truly subversive work. For all its lightness and its three attractive actors (all of whom wrote the script), the work is defiant of sexual norms.

However, 3 Way can’t be categorized as a political play per se, although it unflinchingly questions the deep-rooted concept of monogamy, and just how to define “casual sex,” which has monumental sociopolitical ramifications. After all, an adult knows that once hitched—no matter what one’s sexual orientation—a person would be something beyond human not ever to be attracted to other people. Yet most of us still believe the fairy-tale Hollywood version of endless love for the ages, blindly maintaining a militantly unexamined view of sex and love formed with no broader concept of human nature, life’s vicissitudes, and sexuality than that of a 14-year-old. 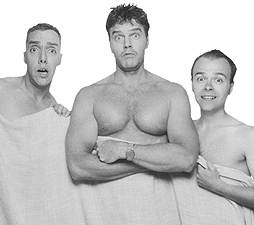 Dan Averitt is the sort of actor who can bring out the paternal or maternal instinct in anyone who has it. He plays Ethan, the dutiful husband who wants his man happy, but fails to see his own lack of erotic imagination is stressing the relationship. When you sense that his partner, Alex (Jon Mikkelsen), is hot to trot with his hunky ex, Matt (John Trones), you may be triggered to pass judgment. You may get very political, thinking because we’ve been advocating same-sex marriage so ardently this decade, we must submerge those desires that would take us out of fidelity—or, to use a less moralistically charged term, monogamy.

Shortly after Alex makes it known that he would rather have Matt than their nosy neighbor watch their cat while the couple goes on a gay cruise, a hilarious scene ensues when Matt and Ethan happen to see each other in the locker room. Matt’s hunkiness and charm could discombobulate any man with a wavering sexual orientation, but in the case of Ethan, a gay man who has internalized the hetero-housewife stereotype, Matt is transgressive fantasy incarnate. However, Ethan, still age 14 on this point, doesn’t “know himself,” as tragic dramatists might have put it.

The bulk of the play takes place the morning after the three men wake up in bed after a night of drinking and sex. Director Jim Lichtscheidl has staged some humorously stylized movements reminiscent of film footage played backward, as each man recalls his version of the story. Kevin McLaughlin’s sound design enhances things nicely.

Each character relates his view of the event with very similar dialogue, but with radically different intent. This juicy technique draws the audience to try to figure out what actually happened—a good thing, given that we typically rush to being scandalized and offended by sexual “misconduct,” so we just sweep it under the rug, and stigmatize the “evildoers.” It also reveals how the erotophobically prejudiced way we view others can become a caricature, distorting and even damaging the other person. For example, Ethan’s take on the events leading up to and into what was actually a fun time had by all turns Matt into a crude macho monster.

The trio of actors brilliantly and uproariously render three very different and complex views of sexual morality, debunking the myth that gay men are nothing but horn dogs. All three characters, however, actually respect each other, something those against nonmonogamy ignorantly claim is impossible. Lots of middle ground exists between monogamy and promiscuity that we’ve yet to discuss as a culture.

All three actors have delightful crossgender supporting turns. Averitt is perfectly snippy as office worker Vicki. Mikkelsen is consummately obnoxious as a woman who keeps reentering the men’s locker room (another funny button pushed). And Trones’s turn as the nosy older neighbor woman is an inspired miniparody itself of Amanda Wingfield, the smothering matriarch of gay Tennessee Williams’s The Glass Menagerie.