Nearly 30 years have passed since “gay cancer” first appeared. Kaposi’s Sarcoma became the initial face of the new disease, appearing as small, dark lesions on infected men, along with Pneumocystis Carinii Pneumonia. For those who knew, it was the look of death coming quickly. 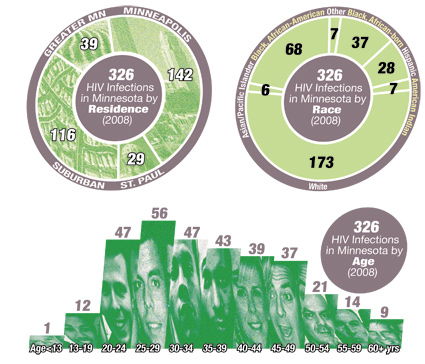 In 1981, the US Centers for Disease Control recorded the first cases of “gay cancer.” Soon, it was called Gay-Related Immune Disease (GRID), and later, Acquired Immune Deficiency Syndrome (AIDS).

In 1984, the Human Immunodeficiency Virus (HIV) was discovered. More than 4,000 lives were lost that year alone.

In 1987, the FDA approved the first drug to fight HIV, AZT. The recommended dose was 100 mg. every four hours—around the clock. More than 16,000 American lives already were lost. US borders were shut to all HIV-positive immigrants.

President Ronald Regan made his first major speech on AIDS, calling it “public enemy number one.” Vice President George H.W. Bush was heckled when he called for mandatory HIV testing, something that has yet to happen more than 20 years later. The disease still spreads rapidly.

Nearly a decade would pass before America saw HIV/AIDS as more than a way to rid the country of gays and drug users. The death of a hemophiliac child, Ryan White, changed that. As well, basketball player Magic Johnson came out HIV-positive. The World Health Organization (WHO) estimated that 10 million people worldwide already were infected, a million in the United States alone.

WHO projected that 33 million were living with HIV/AIDS at the end of 2007.

Another 25 million have died.

Africa has 11.6 million orphans because of AIDS.

Half of all new infections worldwide are among people under the age of 25.

Minnesota is no different.

Today, Minnesota statistics show that 6,220 people are living with HIV/AIDS. Last year saw another 326 new cases diagnosed. Though relatively flat compared to 2007, it was still an increase in a disease that has prevention methods.

David Folkens, Director of Communications at the Minnesota AIDS Project (MAP), says, “It’s what we expect to continue to see, because more and more people are living with HIV, which is a good thing that people are living longer, but more people have HIV, and either don’t know their status, or don’t know they are positive, because there is a greater proportion of people living with this virus. From MAP’s point of view, it demonstrates that we need to focus on prevention and education, and to make safer choices.”

Though HIV/AIDS is known throughout the world, an alarmingly high number of myths about it still exist. The 1980s and 1990s provided drastic reminders of what AIDS could do to the gay community. Friends and family wasted away, as their loved ones looked on, helpless, not able to help them, or ease the pain they went through, as they suffered a terrible death in a world that shunned them. An entire generation learned about AIDS in a tragic way.

Today’s generation knows little of this past.

Folken comments about this new generation: “HIV is not top of mind the past 15 to 20 years, as it was the first 10 to 15 years. They didn’t experience the initial problems and fears that came along with HIV in the 1980s and 1990s. [There is now] a misconception among younger adults, who don’t view HIV as a serious issue, but as a manageable disease. Not everyone responds to treatment, or can afford treatment, or get into treatment. If you miss any of those steps, at best, it’s a life-altering disease, and at worst, it’s a deadly disease.”

Common costs per month for HIV medications range from $273 for Hivid to $2,315 for Fuzeon.

Can you afford these? Will your body accept them?

Though the years of the instant death sentence are over, the seriousness of the disease is not. HIV/AIDS is a worldwide pandemic that has spread rapidly across the globe, affecting every person who cannot obtain treatment. Race, age, or sex matter not. HIV infects the sexually active, drug users, and rural citizens alike.

In 2008, 39 of the state’s cases came from the Greater Minnesota (rural) area, often presumed safe from the dangers of sexually transmitted diseases—one of the many myths that help spread the disease. Practicing safe sex at all times is the only way to help protect oneself against HIV.

Twenty-seven hours. That’s all it takes for a new case of HIV to be diagnosed in Minnesota.

Nine-and-a-half minutes. That’s all it takes for a new case of HIV to be diagnosed in America.

Do you know your status?

How is HIV transmitted?
• Unprotected sex
• Blood transfusion with contaminated blood
• Using contaminated syringes, needles, or other sharp instruments
• An infected mother to her child during pregnancy, childbirth, and breastfeeding (though with HIV medications, risk of transmission can be reduced to as little as 2 percent during pregnancy)

Can I get HIV from casual contact?
HIV is not transmitted by day-to-day contact. You should not be fearful of interacting with persons who are living with HIV.

How can you limit your risk of getting HIV through sex?
• Abstain from sex
• Remain faithful in a relationship
• Use condoms correctly each time you have sex
• Reduce the number of sexual partners

How effective are condoms in preventing HIV?

Condoms are the only products currently available to protect against HIV. When used properly every time, they are a proven and effective means of preventing HIV infection. However, apart from abstinence, no protective method is 100 percent effective. Condom use cannot guarantee absolute protection against any sexually transmitted disease.

What is the risk of getting HIV from kissing?
Transmission though kissing on the mouth carries virtually no risk. No evidence has been found that the virus is spread through saliva by kissing.

Does male circumcision prevent HIV transmission?
Recent studies suggest that male circumcision can reduce the risk of acquiring HIV though sex. However, it is not 100 percent-effective, and circumcised men still can become infected.

Does HIV only affect men who have sex with men and people who inject drugs?
No. Anyone who has unprotected sex, uses unsterilized injecting equipment, or has a transfusion with contaminated blood can become infected with HIV. Worldwide, 90 percent of HIV cases are the result of sexual transmission.

What should you do if you think you have exposed yourself to HIV?
If you think you’ve been exposed to HIV, you immediately should seek help to receive counseling and testing for HIV. You should take precautions to prevent transmitting HIV to others in case you are infected with it.

Getting tested is the first step in learning your HIV status. You can do so during any regular doctor visit. If you’re unable to see a doctor, here’s a list of places to get tested for free, or for a very nominal fee.