Actor Thom Bierdz is best-known perhaps for his role as Phillip Chancellor III on the daytime drama The Young and the Restless. Millions of viewers know the distinct features of his face, and the personality and complex story line of the character he crafts, along with his voice. But the unmistakable timbre of his voice isn’t limited to his acting.

It sings through evocative imagery on his canvases, and cries out from visceral depths in his writing. Despite the occasional misstep or imperfection, it remains steady and firm, with nothing to hide.

By his own admission, Bierdz is an “open book”—a good thing for an author. It’s precisely this true-to-himself living in the public eye as an openly gay man that won him recognition by the Human Rights Campaign (HRC). A recipient of one of this year’s Visibility Awards, he will receive the honor at the 20th annual HRC Twin Cities Gala on September 12. The evening’s theme, “Speak the Truth,” couldn’t be more fitting.

Bierdz says demurely, “I appreciate the award. I don’t take this on as a personal thing.”

Viewing his acting as a way to open minds by making a gay person familiar, Bierdz explains, “I just want [my character] Phillip to be inside people’s homes as this loving gay member of the family. I’d like to help combat homophobia in that respect.” 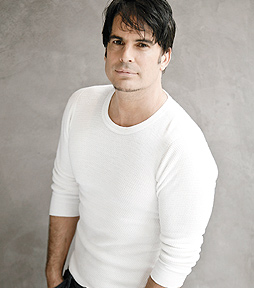 Beirdz is portraying the first gay character on The Young and the Restless since its debut in 1973. He credits Executive Producer Maria Arena Bell as instrumental in reviving the character of Phillip after a 20-year hiatus—this time with a gay story line.

When Bierdz left the show in 1989 to pursue opportunities in film, his agent advised against coming out, citing the prevailing close-mindedness of the time surrounding AIDS.

Bierdz recalls, “It was what people did. It was a scary time. It wasn’t until 2000 that I came out publicly. After my brother, Gregg, killed himself, I was in a place where I had to stop pretending, and focus on what was important. I didn’t want to lie about that.”

Surprisingly, even today, some in Hollywood counsel young gay actors to stay closeted, but Bierdz has found that publicity surrounding his own sexuality has been an entirely positive thing.

According to Bierdz, “The e-mails and letters I get are all supportive—100 percent positive. People are always receptive.”

Being in the public eye has brought much-needed recognition as well to the many causes Bierdz supports. He has used that recognition to battle ignorance and hatred well beyond the television screen. Donations of his art have raised more than $100,000 for a number of charitable organizations, including GLBT ones like HRC, the Matthew Shepherd Foundation, and the Point Foundation.

Beirdz shares, “I love to help out, and my painting is an easy way to do that. I love to paint in public, so it’s a natural fit there.”

Out Magazine recognized Bierdz as 2005 Emerging Artist of the Year, Los Angeles.

Of all the things in his very full life, it is his artwork that gives Bierdz the greatest pleasure, as he enthuses: “I absolutely love painting. It’s instant gratification.”

In addition to GLBT causes, Bierdz’s philanthropy embraces children’s charities, including Make-a-Wish and The Art of Elysium, as well as animal rights organizations, such as PAWS Los Angeles and PETA. But the singular cause closest to his heart is the National Alliance Research for Schizophrenia and Depression.

The subject of Bierdz’s newly released memoir, Forgiving Troy: A True Story of Murder, Mental Illness, and Recovery, gives a personal and often painful look at the devastating effect of mental illness in his own family. Beginning with the brutal bludgeoning murder of his mother with a baseball bat by his younger brother, Troy, the captivating story moves through raw emotions of the tragedy, and how, through remarkable circumstances, the two brothers are reconciled. Despite the dramatic details of the story, the author was surprised at the resonant chord his story has struck with so many of his readers.

In Bierdz’s words, “I didn’t think my story would be as universal as it is, but I’m writing about relationships. It’s something everybody can understand.”

Troy Bierdz remains incarcerated in a Wisconsin prison, but he talks to his brother on the phone a couple of times every week.

The change is visible and extraordinary. Bierdz’s Web site at www.thombierdz.com contains 1994 interview footage from the prison, with his brother struggling to maintain composure.

Personal tragedy hasn’t defined Bierdz, but it certainly filled him with a sense of clarity and purpose, as he has emerged from his considerable trials. Some have called him a Renaissance man. In looking at the trail of successes in virtually everything he has put his hand to, it’s a fitting description. Underneath the many successes is a muted tone of humility that pushes past his talent to portray a character, and into something rooted in his small-town upbringing. It has kept him focused on reality, while carrying him into the limelight through heartbreak, and back to center stage.

A special showing of Thom Bierdz’s art will be on display at the Jean Stephen Gallery, 917 Nicollet Mall, Minneapolis, on September 13, 4-7 PM. It’s open to the public. Visit www.jeanste
phengalleries.com.

Copies of Bierdz’s book, Forgiving Troy: A True Story of Murder, Mental Illness, and Recovery, can be purchased via his Web site at www.thombierdz.com, which also has a number of his works of art and links for The Young and The Restless fans.