Imagine not having the final say over your spouse’s remains. Imagine being denied the right to use vacation time at your job to take care of an ill partner. Imagine begging to see your husband or wife in the hospital, but being told you legally are not entitled. These are just three of the harsh realities GLBT couples face because of unfair Minnesota laws. Now, add another 512 to the list.
Project 515 is an organization with a simple mission: to ensure that same-sex couples and their families have equal rights and considerations under Minnesota law. 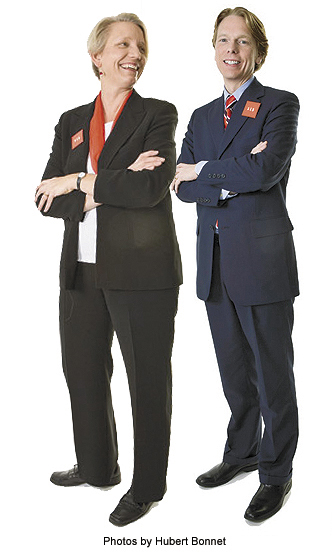 The organization was born following a 2006 public opinion survey sponsored by Equality Minnesota that went beyond the yes or no to same-sex marriage, and dug deeper into what Minnesotans really think about equality and fairness. It discovered almost 70 percent of Minnesotans agreed that gays and lesbians deserve the same rights and responsibilities as straight people.

Obviously, our state laws aren’t up to par.

Since the organization’s official launch in 2007, it has been dedicated to educating communities and legislators statewide about the gap in fairness­— putting “Minnesota Nice” into perspective.

Project 515 Executive Director Laura Smidzik and Board Chair Lee Anderson have been an incredible asset to Minnesota’s GLBT community, stimulating minds with the truth, thus inspiring tangible change in our legal system.According to Anderson, “It’s all about the discussion—talking to people, so they understand and are aware of the inequalities. You can’t have public policy change without people talking about it, and being supportive of change.”

Anderson first felt the need for Project 515 after his extensive efforts to oppose the constitutional marriage ban with Together Minnesota during the 2005-06 legislative session.

The ban officially was defeated, yet at the end of that fight, Anderson found GLBT activists, in his words, “still had no light. All we had done was put a stop to permanently banishing rights that we as a community never even had.”

These rights also were absent in Anderson’s personal life. Throughout their 15 years together, he and his husband, William Fehrenbach, have been committed not only to each other, but also to achieving equality in their own marriage. The couple married in a private ceremony in 1998, established a civil union in Vermont in 2000, married legally in Canada in 2003, and upgraded their civil union to a full Vermont marriage license this fall.

Anderson states, “My personal passion drives me to achieve for everyone.”

Putting his passion into progress, Anderson began to call to action the talented individuals and valuable resources he had discovered while working to oppose the marriage amendment. He hosted a meeting in his living room to discuss possible next steps, and a new initiative began to take shape.

The band of motivated activists began researching what discrimination in our state really meant, digging deep into Minnesota laws, and discovering all 515 laws that exclude same-sex couples from deserving rights. Anderson gives his husband credit for suggesting the name Project 515. The group organized around the principle of advocating to change the long list of inequalities.

Anderson notes, “This level of discrimination had never been quantified, and I’m very proud to have been part of the research team.”

At the same time as Project 515’s inception, Smidzik, who just had left her position as Rainbow Families Executive Director, immediately was impressed by the whole concept of Anderson’s new project, and instantly was excited to get involved.

Smidzik recalls, “We were sitting together at Hell’s Kitchen, and Lee had the list of 515 printed on legal-sized paper, stapled in the corner. I felt like he had this treasure in his hands—something so tangible and so real.”

In its first active year, Project 515’s work helped to pass the Medical Lien or Preserving One’s Home Bill, which delays the state from putting a Medical Assistance lien on a home until after a surviving same-sex partner also dies.

Proud of the organization’s strong legislative committee and well-trained attorneys, Smidzik relates, “With one law passed, we have shown ourself at the Capitol as a capable organization. Legislators watch to see if you can do it. We really crossed our t’s and dotted i’s at the Capitol.”

While half of the organization works on Project 515’s ambitious legislative to-do list, the Education Campaign has been focusing on community outreach, visiting unsuspecting small towns to spark conversations with local government officials and school board members.

Referring to the schedule of outreach programs in cities where conversations about same-sex relationships are few and far between, Smidzik explains, “Our specialty is to hit the unlikely suspects. Our goal is to have the hard conversations. I like [having them]. It creates the need to connect on many levels with people—to find a common place with them where same-sex relationships will matter to them.”

Measuring success of the educational campaigns isn’t always easy, but Smidzik insists it’s more about building connections with people than a hit-and-run. Bonding with an important person in the community, involving local media, having a positive editorial published, and getting invited back for another round are sure signs that something went in the right direction.”

Noting the importance of patience for the seeds of change to grow, Smidzik observes, “There are different thresholds. If I’ve got 50 people in a room, listening intently for an hour, I’m pleased. When I hand out the e-mail signup for more information about us, and it goes around like a hot potato—I get that.”

Smidzik’s most recent visit was to Brainerd, where she met with the county administrator and the school superintendent; appeared on a local cable access show; and spoke before a group of human resources professionals about the effects same-sex discrimination has on businesses. She focused the discussion on what it means to employ people whose rights are not protected under the law, and how this can hurt recruiting and retaining employees.

As Smidzik shares, “No one got up and walked out, and that’s the way we are going to continue to make change. It’s county by county, judge by judge at this point. So, that’s great if your company made HRC’s Top 100 list, but what is the climate outside the walls of your corporation?”

The main obstacle to gaining complete fairness is the sheer lack of knowledge on the subject, both in the straight world and even within the GLBT community. Discovering the state’s high number of discriminatory laws should be shocking to anyone, and crucial knowledge to everyone. State governments often use the marriage law and license as a vehicle for conferring hundreds of benefits and liabilities. Most states do not know the level of discrimination present in their laws, because of lack of clear and thorough research.

Anderson details, “New York has over 1,000 [laws excluding same-sex partners], and Maryland has 300. It varies so greatly, because it all depends on their exact laws and the complexity of those laws.”

Smidzik is a strong believer that every conversation about Project 515’s goal may help inspire positive change for fairness that most residents in our state can agree upon. The Equality Minnesota poll found that the majority of Minnesotans believe in fairness, and Project 515’s message is a reality check about the lack thereof.

As Smidzik’s points out, “We want to explain why fairness is better for this state than what we currently have. And I do believe that Minnesotans, in their heart, are struggling with these issues. It’s just getting them to connect the dots—what discrimination looks like, and what change looks like.”

For individuals in the GLBT community who would like to help educate others, Smidzik suggests they not only come out, but also “come out, and make people feel uncomfortable. Tell people about the injustices you and your partner face, and the inconsistent rights between gay couples and their straight allies. The lack of rights can be really destabilizing for families. It really affects people in times of joy and in crisis. Go to the people who know us, who think we look normal and happy, and tell them we are discriminated against. It’s not an easy conversation.”

Educating people is the best way to ensure a desire for change, and eventually a Legislature that reflects those desires. Project 515’s ability to change the law is all a matter of what the Legislature looks like, as well as the shape of the Governor’s office. Smidzik reveals that the organization plans on clustering bills in the future to help speed up the process, but at the moment, its pace purposefully was set to ensure things would take off in the right direction.

Smidzik herself is stepping down from her position to pursue a career in ministry. She will enroll at United Theological Seminary come January to study for her Master’s in Divinity over the next three to five years.

Happily recounting her extensive involvement at her church over the past decade, Smidzik muses, “It’s a crazy thing—not a midlife crisis, but a midlife renewal. The seeds have been planted for a while, and I’m ready to take the leap.”

After seven years working in the GLBT community, Smidzik would like to try relating to people on a more intimate level—more one-on-one opportunities to call on the inner depths of people.

Even though members of Project 515 and the GLBT community probably would agree it’s exactly what Smidzik has been doing over the past seven years, she remarks, “I want to inspire and ignite the best in people. And I’ll still be finding ways to work in the community, and within social justice and GLBT rights. It’s in my blood. I can’t give it up.”

Anderson is incredibly grateful for Smidzik’s work with Project 515, citing her commitment and enthusiasm to being a tremendous advocate and spokesperson for the organization from the start. Her ability to connect with Minnesotans from all walks of life, combined with Anderson’s deep passion for equality and political intelligence, have helped shape Project 515 into the incredible organization it is today.

As Smidzik sums up, “It’s been great working on the inside of Project 515, and I look forward to cheering it on from the outside.”