Pssst…want to know where the best chefs of the Twin Cities go out to eat? The 112 Eatery in Minneapolis. OK, so it’s not exactly a secret: Even on a Monday night, both the restaurant and bar are likely to be packed. 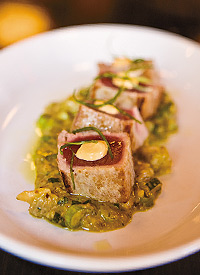 What places this restaurant a few strides “off the eaten path” is its eclectic menu—neither casual nor effusively formal. One just as easily can order stringozzi with lamb sugo as a cheeseburger and fries. Either entrée will be presented artfully and prepared exquisitely, possessing a particular flavor one can’t find anywhere else—thanks to co-owner and Executive Chef Isaac Becker (Lurcat, Campiello).

A previous visit to the 112 made me a fan of the steak tartare appetizer ($9), so I was thrilled to be equally enamored of the sweet and sour crab salad ($9). The combination of fresh cilantro with basil, crab, and thin fried onion rings illustrates just why the 112 inspires so many area chefs: Becker’s fusion of ingredients often is surprising, yet perfectly balanced.

My dining partner and I also were treated to the sea scallops with oyster mushrooms ($12)—a dish I typically would not order for myself, which is why it was so enjoyable to place my complete culinary faith in co-owner and Front of House Manager Nancy St. Pierre. I can’t think of a more pleasant way to work out trust issues than over a delicately browned scallop.

St. Pierre as well selected the halibut with cold roasted cauliflower ($30)—an entrée that, according to Becker, doesn’t sell as well as he’d like, perhaps because of to its wording on the menu.

Becker is considering renaming the dish, but confesses, “Sometimes, I don’t care whether a dish sells or not, if I really like it. I’ve got things with shrimp and chicken that everyone buys, but I want some things on there that people who are looking for something unique and different will buy.”

Thus, Becker happily retains the duck paté bánh mì ($9), as well as the gougère and fried mortadella sandwich ($8), largely for other chefs and adventurous foodies, even though he might sell just a few each night. Let’s hope for his diners, the cauliflower accompaniment may, by another name, smell sweeter, but roasted to a slight crispiness with bits of chorizo sausage and cilantro, it was a lovely complement to the halibut— filling without being too heavy.

Becker also takes a different approach with his pork tenderloin ($18) from the very start. 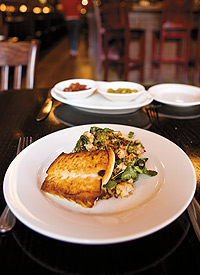 In Becker’s words, “It’s bone-in pork tenderloin, because it’s kind of a unique cut. You just don’t see it that often, but one of my favorite parts of a pork chop is where the meat connects to the bone. There’s something more flavorful and tender about that.”

Sitting atop a spicy sauce of chipotle peppers, French horn mushrooms, garlic, marjoram, butter and cream, the tenderloin was one of the stars of the evening, prompting me to commit an atrocious breach of etiquette: I gnawed the bone. True, Emily Post says it is perfectly acceptable to pick up a chicken bone or even a rib bone with one’s fingers, but I strongly suspect what I was doing to that gently curved bone only could be described as obscene.

I reclaimed my dignity, if not my waistline, with the butterscotch budino ($7). Neither my dining partner nor I has an overzealous sweet tooth, and butterscotch can be such a boisterous flavor, but it was brought into balance with a moderate sprinkling of sea salt.

St. Pierre explains, “We didn’t give you the traditional dessert at our restaurant, which is the tres leches cake, because the butterscotch is just so good and it’s different—that saltiness with it just changes it. To me, it would be too sweet without that salt on there.”

It probably would be, but with this addition, it was that kind of wonderful salty/sweet temptation one fantasizes about all alone at night…or I suppose, with a partner, if he or she is not too grabby with the spoon.

Given his incredible range, and flair for the unexpected, Becker recently was nominated as one of the James Beard Foundation’s Best Chefs in America. Since its opening in 2005, the 112 Eatery has been honored by the Star Tribune, City Pages, Bon Appétit, and Mpls St. Paul Magazine.

But for Becker and St. Pierre—a husband and wife team—their greatest joy is that their restaurant is successful enough to support them as a family.

“My goal was just to be able to make a living, and do what I want,” Becker remarks.