“I Was Babs’s Lesbian Lover”: An Interview with Joan Rivers

Heretical comedienne superstar and red carpet celebrity stalker Joan Rivers performs at the Pantages on November 4. Few 76-year-olds are as in sync with the times and as broadly popular as the well-dressed funny lady whose signature question is: “Can we talk?”

I spoke with wild woman herself recently, and boy did she give me a piece of her mind. But I guiltily confess, I loved it! 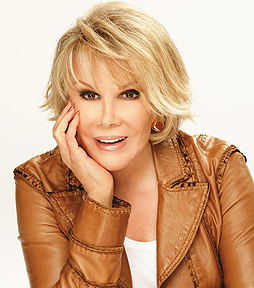 Are you willing to talk about some of your own plastic surgeries?
Oh, it’s so boring. I’ve done it, but who hasn’t? You know what I’m saying? When I first came out and talked about it, nobody would come out and admit it. Now again, it’s just like Mackenzie Phillips. Everybody’s talking about it, and plastic surgery now is vagina lifts—all these weird things that are going on. I wrote a book about it: Men are Stupid and They Like Big Boobs. It’s everything you ever wanted to know about plastic surgery.

You looked great in your performance at the Apollo. Where do you get all that energy? You’re performing constantly.
Energy, yeah, is incredible, and I wish I could say to you it was drugs or something or healthy eating, but it’s just luck. Obviously, my grandmother was raped by a Cossack or something.

You were nominated for the 1994 Tony for Sally Marr…and Her Escorts. Tell me about that.
That was the life story of Lenny Bruce’s mother, and I loved doing that play. That was one fabulous play.

Do you remember when you were first exposed to Lenny’s work?
Probably when I was in high school. Someone took me on a date to [Greenwich] Village to see Lenny Bruce, and it was just amazing, just amazing.

You yourself became a groundbreaker for women in comedy when women were supposed to always come off as nicey nicey. Nothing Erma Bombeck about you. You were heretical and irreverent from the get-go.
Yeah, and still am.

What triggered that in you?
Truly, I don’t analyze. I think that’s what’s kept me so relevant all these years. I don’t know. I just talk about what I want to talk about, and it’s always current and in the moment. I guess that’s what it’s from.

Was it a hit?
Oh, yeah. Right. Even my father walked out.

Are you still in touch with Babs at all?
I see “Babby” [chuckles] every now and again, and once I reintroduce myself, she’s very warm.

I hear she’s a bit of a diva.
Well, as I say, once I reintroduce myself, she’s very, very gracious. But I do have to say, “Hi, hello, remember me?” But, you know, that’s just our Barbie.

You too should do a film of Driftwood.
I think she’d be brilliant. Brilliant!

When I was a kid, I loved to watch you on The Tonight Show with Johnny Carson. One thing you said that really stuck with me was—one time, when he was talking to you about sex in the movies, you said you were far more concerned about violence. Do you remember making that comment?
No, but it’s true.

We thought violence in movies was bad then, but God knows, it’s far worse now.
Yeah.

Any thoughts on that?
No. Everything sucks. Everybody’s sleeping with everybody. There are no morals. There are no manners. Boy, do I sound old. No stigma about anything. In my day, everyone was of the immigrant mentality. You worked like a dog, so your kids could get an education and do better. Now, nobody even cares if their children are doing better or not. I think our society is very messy.

Do you see it getting any better?
No. I see it getting worse. I think we should get a benevolent dictator. And freedom of speech? Shut up! And everyone has a right to vote? Not if you’re a moron. No. And I’ll decide who’s stupid.

I know your gay fans can’t wait to see you at the Pantages
I want every gay man to be there! Let’s not forget who is Queen. Kathy Griffin can be Princess. But she ain’t Queen! She’s my very good friend, but she can wait till I die.

Well that’s going to be a while, I think.
I’m not sure. My daughter’s hoping.

Where will you be going after St. Paul?
Probably for a long rest at Hazelden.