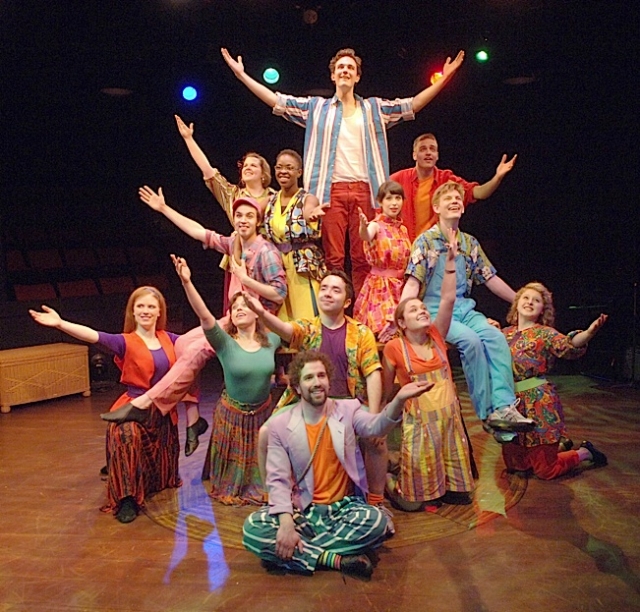 The cast of Godspell. Photo courtesy of Theatre in the Round and Act One, Too, Ltd.

When the musical Godspell opened in 1971 it created a stir because its folk-rock approach went against the grain of traditional religious music. This was long before Christian rock became the mainstream staple that it is today. However, many found its simple approach to the Gospel According to St. Matthew to be refreshing. Book writer John-Michael Tebelak and composer-lyricist Stephen Schwartz focused on Jesus’s emphasis on love, forgiveness, generosity, and the negative power of being judgemental. Though sin is mentioned throughout, it’s not in a tone of potential damnation but as a gently forgivable personal flaw one is challenged to overcome.

That generous spirit is captured in Theatre in the Round Players’ vibrant production of Godspell. Director Dann Peterson honors the flower child sweetness that the original production and 1973 film emanated. Bright oranges, pinks, blues, and greens infuse the John A. Woskoff’s simple costumes which allow the actors to move freely and often boisterously to James Kuntz’s choreography. There is a look of toys in a nursery coming to life, underscoring the notion of childlike innocence as a prerequisite for entering the Kingdom of Heaven.

The vocally gifted Conor Finnerty-Esmonde embodies childlike goodness and youthful confidence as Jesus. Leading an ensemble that ranges from late teens to early 30s he steers the multi-epsisodic action of the musical with a deft and seamless hand. Familiar parables are rendered throughout in a vivid style that brings to mind the San Francisco Mime Troupe and guerrilla theater where activist actors make big statements with broad presentational strokes. A show within a show where hand puppets designed and choreographed by Chava Curland rise above two sheets suspended on wooden strips tells the story of the Good Samaritan. The story of a slave who is forgiven his debt but arrogantly refuses to forgive a debt owed him is played with a cartoon-like kineticism.

Robert Ragoonanan’s capable musicians get that folk-rock feel but at times but at times overpower the voices. The ensemble’s rendition of the show’s signature tune Day by Day soars with luminous power. Emanuel Ardeleanu as Judas and Finnerty-Esmonde bring vaudevillian flair to All for the Best. Felix Aguilar-Tomlinson’s delivery of All Good Gifts is joyously moving and Finnerty-Esmonde’s rendition of Beautiful City is transcendent.

The shift from Jesus’s journeys with the disciples into The Last Supper, the Crucifixion, and the Resurrection are evocatively served by Mark Halvorson’s lighting. Whatever one’s beliefs, we are left with a sense that Jesus was a loving and lovable social radical who threatened a conservative and militarized civil society that definitely needed reforming.

Note: Stephen Schwartz would go on to create Pippin and Wicked, two other landmark musicals.