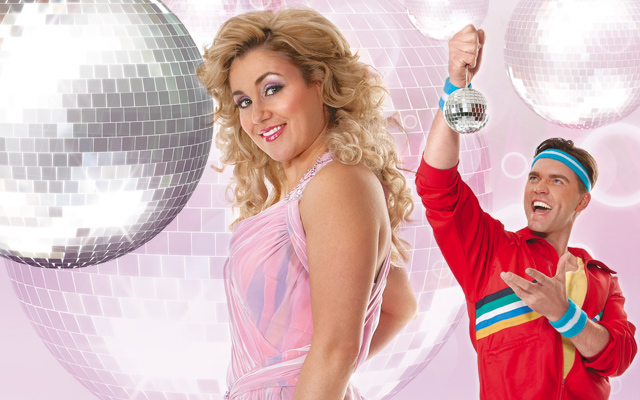 You know those thought-provoking theater companies that offer probing post-performance discussions? Well, that’s so not Chan. How about a post-show disco party instead?

Right. I thought so. Save that “Long Day’s Journey” ticket for a dreary winter night. Come summer, come out to Chanhassen Dinner Theatres for its area premiere of “Xanadu,” with its guarantee that no brain cells will be assaulted during the run. The only injury you might incur is falling off your chair with laughter, according to Chanhassen’s Artistic Director, Michael Brindisi.

Brindisi was visiting New York City in 2008 on one of his usual scouting trips when he picked up a matinee ticket to “Xanadu.” “I laughed out loud for 110 minutes and loved the show so much, I wanted to return in the evening,” he recalls. He’s since rented the film of the 1980s movie, starring Olivia Newton-John and Gene Kelly, and continues to guffaw all the way through it—thus, the perfect “beach read” kind of show that summer calls for. It opens June 1 for a limited run through September, and already tickets are going fast. “When the host of our current production mentions it as coming soon, the whole audience goes ‘Ooooh’,” Brindisi notes. “It’s a cult film, a party movie, and clearly lots of people know it and love it,” he adds.

Here’s the slender premise, which won writer Douglas Carter Beane a Drama Desk Award for “Best Original Book of a Musical” as well as a Tony nomination for his campy spoof of the ’80s film. Kira, a Grecian muse, is sent to earth by Daddy Zeus to inspire a young artist to achieve his greatest dream. And, since the setting is Venice Beach, California, this artistic super-stretch doesn’t include writing the great American novel nor composing a world-class symphony. It involves revamping an abandoned roller rink into—genius!—a roller disco! (Hey, it’s California.)

There’s a catch (there always is): Kira falls in love with mortal artist Sonny, a no-no back up there on Olympus, and her jealous sisters rat on her. Zeus (think Gene Kelly) is ready to toss her out until softened by a chorus of “Have You Never Been Mellow?”—one of the original song hits composed by pop-rock legend Jeff Lynne et al. Kira, in proto-Olivia style, delivers a blast from the past.

She’s played by Chan regular Jodi Carmeli, who portrayed the narrator in “Joseph…”  and Maria in “West Side Story.” Sonny, her California squeeze, is performed by Dieter Bierbrauer, veteran of “Oklahoma!” and also Jodi’s love interest in “West Side Story,” where the working chemistry between the two first ignited. The rest of the cast represents a vibrant mix of familiar vets and fresh, new faces—a 50/50 mix, just as Brindisi wants it: “And this ensemble is the real stars of the show,” he insists—“extremely talented, extremely good-looking, really sexy, really fun.” Not only do they sing and dance, but, ahem, they roller skate. Constantly. Even off on ramps and into the audience. Under a disco ball.

Sets and costumes, too, are “pretty wild,” he promises—“more zany than spectacular. And a mural comes to life.”

New for this show are options for audience members such as onstage seating for a slight extra charge, which includes a souvenir disco prop box (think light-up wands). Oh, and the disco parties: Held post-performance two Thursdays a month, they’re free for audience members.

“This show is a great representation of the newer Broadway works we’re looking to produce,” says Brindisi. Since he assumed the role of President as well as Artistic Director two years ago, he is consciously working to inject new energy into the theatre complex to attract new, and younger, audiences. Shows he’s eager to snap up as soon as they become available include “Mary Poppins,” “Little Mermaid” and “Mamma Mia.” Family fun, for sure, but far from yet-another rerun of “The Sound of Music.”

He’s also aware that “if you have 90,000 square feet on your hands, you’ve got to be more than just a theater. “Now we offer live music, corporate, birthday and holiday parties, and Stevie Ray’s Comedy Club, which is packed every weekend with young, new faces who’ve never been to a musical  here.” But will soon, if marketing goes as planned.

In line with audience development, Brindisi has paid mind to food development, too. A new chef is on board, overseen by Brindisi himself (“I’m Italian, so I know about food”), who has introduced new bread from New French Bakery and an upgraded coffee products, in order to create favorable first and last impressions for dinner guests—“like the opening lines and the curtain call of a show. I tell the kitchen staff, ‘The show begins at 6 o’clock, not at eight.’” Thus, a new salad of field greens, not iceberg, Angus beefsteak (“costs us more but it’s so much better”), and a completely revised wine list.

Okay, a final question: What, exactly, does the word “Xanadu” mean? Claims Brindisi, “To create art and fall in love.” Who am I to argue? Bring it on!