It’s a mystery that Clifford Odets’s 1938 drama is not produced more often. It deserves to be in the same luminous category as O’Neill’s Mourning Becomes Electra, Hellman’s The Little Foxes, Williams’s The Glass Menagerie, and Miller’s Death of a Salesman. In other words it’s clearly one of the greatest plays of the first half of the 20th century.

Though Rocket to the Moon certainly penetrates what Franklin Roosevelt, the President at the time, called the repercussions of “economic royalism”, it was Odets’s labor play, Waiting for Lefty, that really made him controversial. He was later on accused by Joseph McCarthy’s House UnAmerican Activities Committee and opted to name names of supposed communist dissidents in show business. Ironically, in being blacklisted by the paranoid Right, it seems that many on the strident Left in American theatre couldn’t forgive him for that.

Another possibility as to why Rocket to the Moon is seldom produced on these shores may be is how its portrayal of women seems -I repeat- seems to be for most of the duration of the play. There are many liberals nowadays who will skim, rather than closely read a play, so that it can be fully understood and call it misogynist when the play is in reality a scrupulous deconstruction of how men classify and stereotype women.

A quick read is almost always a dangerous thing and it can appear that protagonist Cleo Singer, a secretary for dentist, Ben Stark, is simply a shallow young thing. Stark’s wife, Belle, is a nag who appears to be a stereotype, and Mr. Prince is an aging man of means who makes brazen chauvinistic arguments for why it’s in an attractive young woman’s best interest to hook up with an elderly man and let him take care of her. Stark falls in love with Cleo but hasn’t the courage to leave his marriage and a financial safety net provided by his father-in-law, Mr. Prince. And some could legitimately conclude that Stark strings her along. And that’s never a nice thing to do. 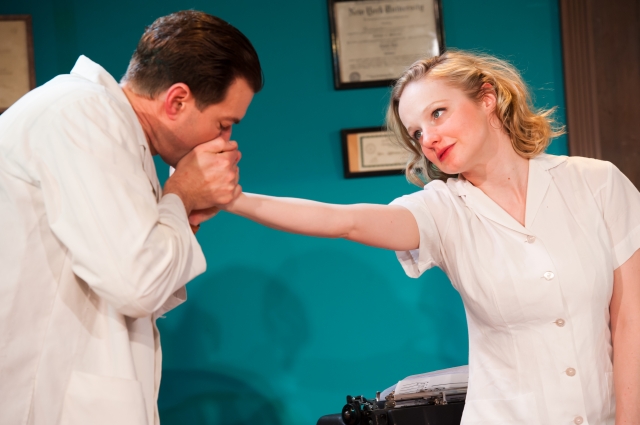 Gremlin has teamed up with Hennepin Theatre Trust at New Century Theatre to offer this staggering revival of Odets’s great play. Director Ellen Fenster and her memorable cast have ingeniously penetrated the psychology of the characters while representing the world views those characters have come to identify themselves with. Peter Hansen captures Stark’s insecurity – a man whose economic footing keeps him trapped, obligated. Hansen vividly represents in Stark the identity crisis of men who are getting older in a depressed economic period and see their future options as cruelly limited. David Coral is moving as another middle aged dentist who is also facing down debt, which of course, strangles his ability to move forward. Craig Johnson, in one of his best performances ever, plays Mr. Prince with cold patrician will. Prince’s brutal territorial honesty about human nature, as spoken by Johnson, is stunning. (Social Darwinism’s dehumanizing character is a concept numinously revealed in this play.) Indeed, Johnson is younger than the role is written but he pulls it off perfectly, nonetheless. Jason Rojas and Edwin Strout, both excellent, also bring different male dynamics to the piece: skepticism of women as a species and a view of young women as easily.

In the two women’s roles, Daisy Macklin Skarning makes the nagging perfectionist Belle into someone we can actually sympathize with. Because Odets and Fenster have so scrupulously set up the economic aggression of the world the characters inhabit, anyone with an ounce of empathy, can feel for the limits put on her and still understand why her husband wants out of the marriage.

But it’s Jane Froiland’s maginificent portrayal of Cleo that consummates this extraordinary theatrical experience. As each of the men present a way to stigmatize and stereotype her, Cleo is able to deftly escape their snares. It’s as if this intense engagement with various types of male negativities makes her stronger and stronger and sharper in shaping her future.

Yet, we are not made to despise the men. Odets and Fenster’s cast show them as the inevitable, inexorable products of an economic system that is bigger than any man. Even bigger than the play’s most powerful man, Mr. Prince. For all his smugness it’s his view of money and power that have made him stereotype himself.

The 1930s office setting has been beautifully and simply designed by Carl Schoenborn and A. Emily Heaney’s costumes match the period and the characters splendidly.