Winter What To Do – WHERE: Whistler, BC 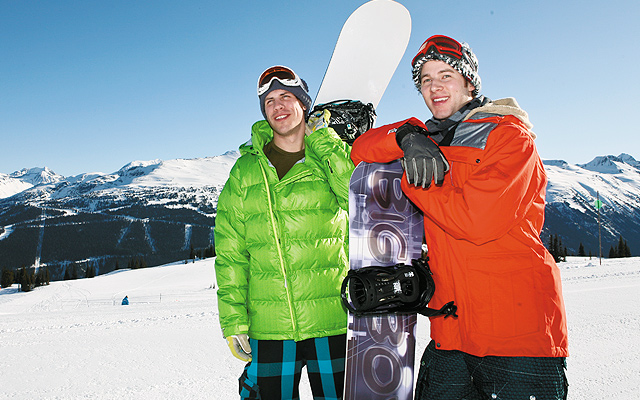 Far-Flung Ski Trip: Where Else But Whistler?

It’s winter and you want to get away.  The Swiss Alps might not be an option, but perhaps somewhere in North America will sweep you off your feet in British Columbia, Canada.  Try Whistler for downhill skiing, snowboarding, shopping, eating, drinking, and hot-tubbing.  Go during WinterPRIDE and turn it into one big party–we could use a cool winter counterpart to our sundry summer Pride celebrations.  Surrounded by mountains in a snow-covered wonderland, you’ll feel far away from anything resembling your daily routine.  It’ll even feel a little worldly in an Olympic sort of way with plenty of updates and enhancements that were made for the 2010 Winter Olympics in Vancouver when Whistler hosted many of the downhill skiing events.  Keep an eye out for the five rainbow rings–Olympic reminders are both in the Village and up the mountains.

Your trip starts before you get to Whistler.  Accessible by train, car, airport transfer, bus, taxi, helicopter, or ride-share, you need to get yourself to Whistler, somehow.  But, just because you can’t fly there, doesn’t mean you should dismay–you get to witness some of the most beautiful coastal scenery along the Sea-to-Sky Highway.  Prepare a good soundtrack for this trip, we chose dramatic movie scores by the composer Hans Zimmer and it felt like it was a film…and ran about the same length of time with sweeping views set to majestic music.

Whistler is comprised of an Upper and Lower Village and two mountains that are connected at the top by a gondola.  Whistler and Blackcomb Mountains used to be two separate skiing areas until one was sold to the other.  How do you buy a mountain?  How do you sell a mountain?  I can’t quite fathom the transaction, but the result is a good one–a skiing package includes both mountains.  The winter average for snowfall is 39.1 feet and the temperature is usually around 22°F.  With over 200 trails, the 37 lifts can accommodate transporting over 65,000 up the mountains per hour.  It’s popular and it’s ready for you to join the fun.

Whether you’re wearing skis or not, there’s one big red reason to take a lift upward–the Peak2Peak Gondola.  Built in 2008, Peak2Peak joins Whistler and Blackcomb Mountains as a 1.88-mile long, completely unsupported lift.  The ride between the mountains is 11 minutes of breathtaking views of all sides–up, down, and all-around.  And, as Dean Nelson of GayWhistler.com told us, plenty riders have mastered the art of shaking up some cocktails to enjoy in those 11 minutes: Fly the friendly skies. 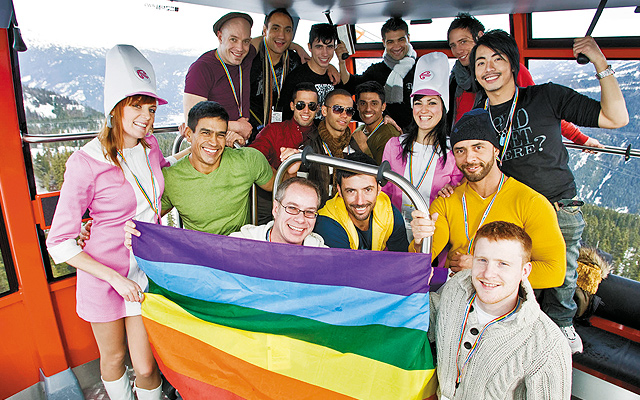 Back down on the ground, the Village is rather dense with shops, restaurants, and hotels in the Lower Village while mostly hotels and access to the lifts are in the Upper Village.  A short walk between the two can find you suddenly in the mix of an outdoor shopping mall with the same sorts of stores you can find at home (or anywhere…like GAP, Eddie Bauer, North Face).  We shopped the sales racks and found better deals in Whistler than at home, even given the difference in US and Canadian dollar values.  There are plenty of places to buy souvenirs and even at least one bookstore to tuck into and find a quiet read for the spa.

Many of the hotels have spas in them, but we ventured out to the Scandinave Spa outside of the Village, set on a hill in the mountains…surrounded by trees and privacy.  If you’ve never experienced a Scandinavian style spa, it is based on the principles of heating and then cooling, somewhat rapidly. Having a eucalyptus-scented steam room, some saunas, some cool pools and showers, hot tubs, and solariums, the Scandinave Spa lets you choose your own style for your heating and cooling road to Wellville.  Relaxing in a steam room would be followed by stepping into a cold shower.  Or, opening up the pores in the sauna would be followed by closing them in a shockingly cool pool.  You create your own circuit of sorts which could last as long or as short as you’d like, but each must end with some quiet time in a solarium, warming back up.  The rule is that there’s no talking at Scandinave Spa, which is remarkably easy to follow the whole time while relaxing, but remarkably hard to adhere to when being doused by cold water.  Be sure to check the massage options as well, the Scandinavians know how to knead out a knot or two.

Finally and most importantly, more alluring than just the fact that Whistler is the top ski destination in North America is the fact that it holds a week-long WinterPRIDE.  GayWhistler.com coordinates an annual celebration of all-things-GLBT with special rates and activities; this year, WinterPRIDE is February 3-10, 2013.  While there are no gay bars in Whistler, WinterPRIDE pretty much takes over the Village and the slopes for a week with special parties; daytime activities like ziplining, snowshoeing, snowmobiling, and talks about social issues; guided ski and snowboard trips down both mountains; and plenty of apres ski food and fun.  There’s drag to be found and drinks to be downed. 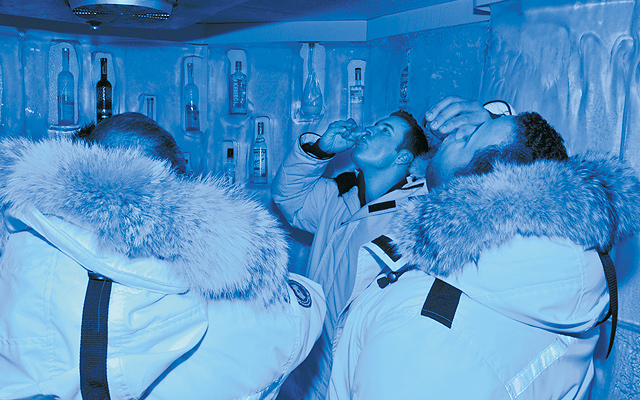 The Village and surrounding area have multiple hotel, condo, VRBO (Vacation Rental By Owner) and timeshare options–choose your style and price and most everything is within a short distance to all the action.  We stayed at the Fairmont Chateau, which looked like a modern angular Neuschwanstein Castle set in a Bavarian forest, especially the further we traveled from the Village up the mountain. Heavy wood beams and colorful folk-inspired art carried through the Chateau feel inside, while the views from all sides were spectacular.  Since everything is accessible by walking or taking a taxi, we parked the car (for a $20-$25 cost/day) and enjoyed what the accommodations had to offer us: plush comfort and proximity.

Choosing a restaurant in Whistler can be as easy as choosing your hotel–most of the hotels have casual cafes as well as more formal dining destinations.  The Wildflower at the Fairmont Chateau had the most luscious breakfast, something I’d heard of from foodie friends who’d already eaten there–the brunch is tremendous and spectacular.  Lunch at Nita Lake Lodge south of the Whistler Village Area had a lovely lighter soup and sandwich fare for pre-trudging in nature.  Stay where you eat or eat where you stay–there are plenty of options.

As for restaurants that weren’t attached to accommodations, we went with places that people had personally vouched for–places that have thrilled previous foodie friends when they’ve dined at them: RimRock Cafe and Araxi Restaurant + Bar.  RimRock Cafe is a modest, warm lodge-like restaurant, just south of the Village.  Separate from the hustle and bustle, RimRock is relaxing and the ambiance is embracing.  A nice menu with lovely variations of fish, seafood, meats, and seasonal vegetables and grains, we chose the Prix Fixe option that was the most affordable splurge of our dining endeavors.  Our beginnings included a Roasted Beet Salad with apples, avocado, and a champagne vinaigrette.  My friend ordered the fish while I ordered the Scallops and Pork Belly, but asked them to hold the Scallops since I don’t eat fish or seafood.  That’s right.  I got Pork Belly with Pork Belly–and was very happy.  We ended with the Sticky Toffee Pudding.  Read that again and know that it was as good as it sounds, rich and gooey. 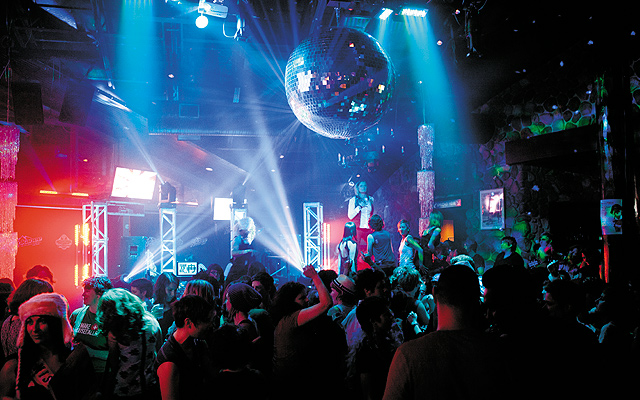 Despite the superb meal we enjoyed at RimRock, the culinary winner of our trip to Vancouver and Whistler was Araxi Restaurant + Bar.  We spent hours there; bantering with the servers, sipping the different wines, slurping the coastal oysters, and munching the dessert macarons.  Araxi is the place to see and be seen right in heart of the Lower Village.  A wide-open room full of tables upon tables, you can look around and make eye contact with people you’ve been spying on all day while riding the gondolas and lifts, or perusing the sales racks.  Starting with special oysters chosen after studying the list and consulting the Australian server, we moved leisurely to our main entrees.  The menu has changed since our visit but Roasted Saddle of Rabbit with pork cheek looks to be similar to one of the succulent dishes we devoured, something which we would write home about.  Thankfully, the dessert menu still features our favorites: Poached Anjou Pears with chevre cheesecake and hazelnut streusel crust which was more of a fork-food paired with the Fuji Apple Beignets, pecan donuts filled with apple which we happily dunked in caramel-milk chocolate sauce.  We gilded the hell out of that lily.  When it was finally time to bid adieu to our meal, we took some macrons to go for enjoying back in the hotel…it helped ease the departure.  Too bad they don’t deliver to Minnesota.

Where to Go Online:

Shopping and Attractions in the Village
www.tourismwhistler.com