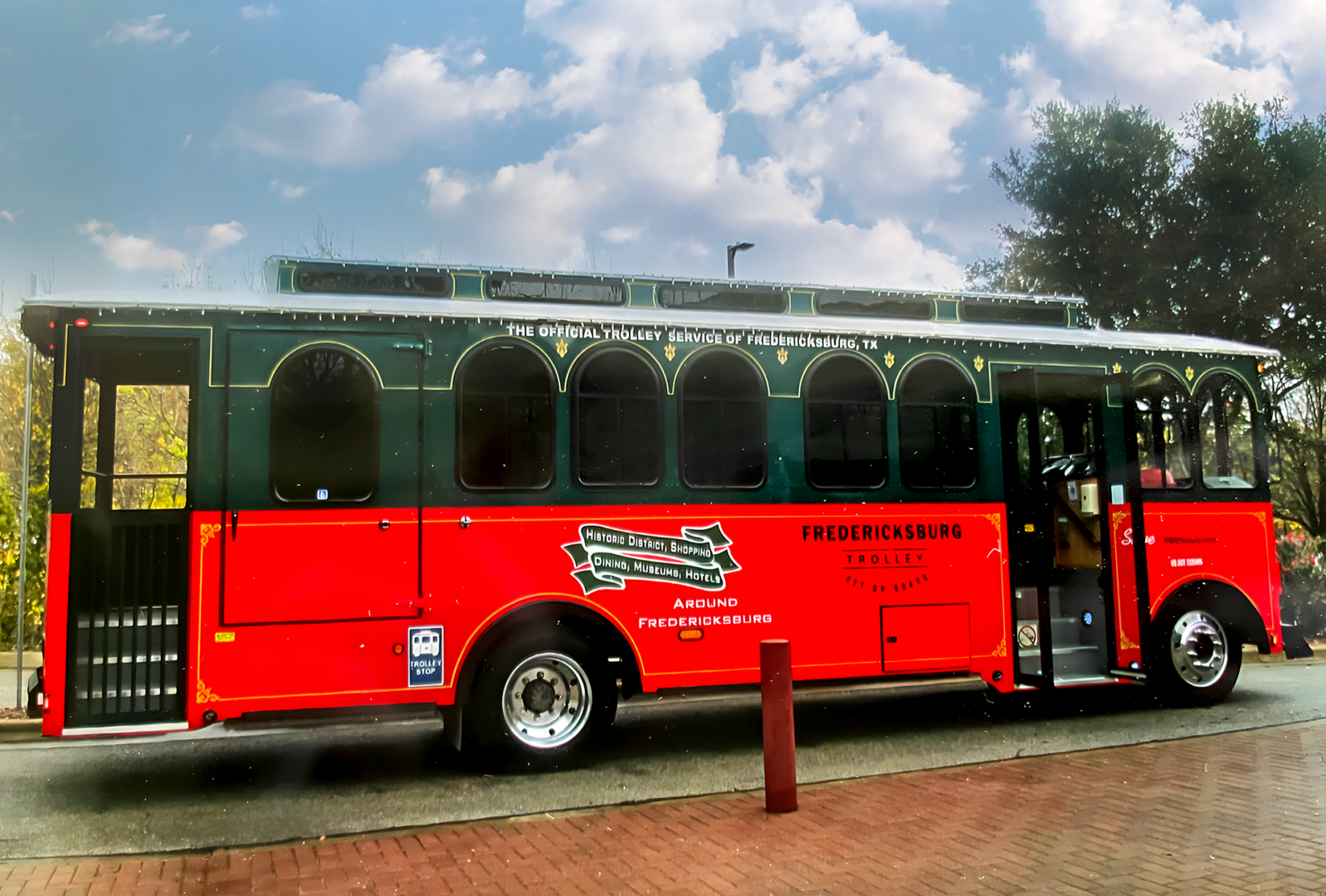 This is not your typical Texas landscape, populated by cowpokes in boots and ten-gallon hats loping across plains flat as a flapjack and drawling “Howdy.” This is Fredericksburg (pop. 11,000), anchoring the verdant, rolling landscape of the state’s Hill Country, where peaches and wine grapes replace rolling tumbleweeds.

It’s a sweet community founded by German farmers in the 1800s and still a town where Evelyn, our guide at its cache of settlers’ buildings called Pioneer Village, spoke no English until enrolled in school.

Those original immigrant farmers, she instructs, lived too far from town for their ox teams to make the trip and back in an afternoon, so these families were awarded a tiny lot in town as well, where they erected Sunday Houses: one-room cottages of lumber or limestone (no water, no heat) with maybe a loft for the kids to sleep, reached by an outdoor ladder. Thus, the pious Germans could conduct their Saturday business, enjoy a beer that night, then attend Sunday church before heading home. (And that’s also why the streets are super-wide: to allow their oxcarts to turn around.)

Many of these iconic dwellings still remain, renovated to serve as shops, cafes, B&Bs. They’re easy to spot as you amble down Main Street, or, even easier, aboard a narrated trolley tour departing from the Tourist Office. First stop: Vereins Kirche, anchoring the town’s main square—the town’s first church, built in octagon form so its windows might spot the approach of hostile Comanches from any direction. Today it hosts settlers’ artifacts—rifles, branding irons and cookie cutters, a Luther Bible of 1665.

Back at the Pioneer Museum, Evelyn invites visitors into a one-room schoolhouse; a furnished Sunday House near the windmill that drew its water; the communal bathhouse-cum-barbershop, and more. Audio descriptions of the lifestyle spring forth as you cross each threshold.

Then, what’s this? The National Museum of the Pacific War, amid the land-bound Texas hills? It soon makes sense when you learn that this is the hometown of World War II’s Admiral Chester W. Nimitz, who commanded the Pacific fleets’ operations. (In fact, the Nimitz Hotel of 1860—a stagecoach stop back then—still dominates Main Street, just where its proprietor, the Admiral’s grandfather, erected it.)

Streetside, the museum is flanked by tanks and artillery, while inside it unspools the riveting wartime story, retold by newsreels of the time, participants’ oral accounts, models of warships and the opposing fleets in action. See the Japanese submarine that attacked Pearl Harbor while gunfire and flames erupt behind it on a wide screen. Continue to the impossible battles on Wake Island, Guam, Bataan, Iwo Jima and other islands nobody’d ever heard of before.

Then settle your spirits by a stroll along Main Street, shopping at Texas Leathers (I now sport a new billfold in tones of lime and purple); Rustlin’ Bob’s, offering “Texas gourmet foods” to sample and savor, from pralines and mesquite bean jelly to pickled everything; Something for Men, showcasing belts, knives, wallets, hats; and, not to be outdone, Gypsies & Cowgirls for that essential pair of rhinestone-covered boots and a new feather for your 10 gallon hat.

Woven into Main Street’s robust retail scene shines a string of unique art galleries such as Insight, housed in a 1907 dry-goods store whose high tin ceiling and limestone walls support 60 nationally recognized talents. Artisans: A Texas Gallery showcases primarily Hill Country artists in every medium you can think of: woodworking, paint, leather, jewelry, glass. Charles Morin, who’s passionate about history, specializes, he says, in “dead artists. But,” he insists, “we’re not a frou-frou gallery: We have fun.” Gallery 330 is the site for works of “good young artists: affordable ones,” explains owner Mary Lindsey—works ranging from oil landscapes to giant metal sculptures.

Fascinating as Fredericksburg proves, do plan half a day to get out of Dodge. A 20-mile drive takes you to the Sauer-Beckmann Living History Farmstead, where costumed re-enactors—farmers, bakers, a housewife at her Singer treadle sewing machine—liven the original 1869 homestead and its add-ons leading to 1918. Here, a pioneer family would butcher their own meat, grow their own vegetables, preserve their own fruit and spin their own sheep’s wool into yarn.

It’s parked in the Lyndon B. Johnson National Historical Park, which also houses the one-room school where the president-to-be at age four sat on his teacher’s lap (says the park ranger) while she schooled the older kids. Close by resides the Johnson family graveyard, where the tombstones of LBJ and Ladybird loom large. “It’s only 200 yards from Johnson’s birth home to his expansive ranch house”—the Texas White House, complete with 15 phone lines—notes our ranger guide: “But those 200 yards changed history.” In a hangar nearby (where LBJ often staged press conferences) stands Air Force One Half, ready to take off for Washington. We all climb the boarding steps to pose. Minnesota’s own HHH—Johnson’s vice president—visited here twice, Ranger Vince reports.

By now, we’re ravenous. And Fredericksburg is ready for us. First stop: August E’s. Within its clean, white confines (you’d never guess it once was a mechanics’ shop) I bit into the kitchen’s signature crab cake—moist and meaty, sauced with remoulade—then a wedge salad dressed-for-success in blue cheese, wood-grilled corn, marinated tomatoes and bacon, followed by a pair of quails fancied up with wild rice, pork sausage, cranberries, asparagus and pomegranate molasses (or go for the prime steaks, sea bass or game).

At Chase’s Place, we gathered around the fireplace to sip hipster cocktails, then meandered to Hill & Vine to share a robust sausage and cheese board before proceeding to entrees ranging from fried chicken and burger sandwiches to mesquite-smoked pork chop, Angus ribeye with Texas (corn) caviar and my choice, state-of-the-art fish tacos. The Restaurant at Hill & Vine’s guest cottages (Sunday house style) knows how to deliver a spicy Margarita, plus a grilled cheese sandwich composed with Lone Star-size slabs of cornbread.

It’s DIY at Fischer & Wieser’s Cooking School, owned by Mark Wieser, who grew the company from a log cabin ca. 1870 (“You paid $150 for that?” demanded his shortsighted mama), from which the kid used to sell peaches from the property.  Today it’s morphed into Das Peach Haus after a Eureka moment that led to marketing jalapeno jelly—the first to introduce that addictive pepper to the American palate, resulting in the outfit’s now-legendary national best seller, Roasted Raspberry Chipotle sauce. You’ll find it in the company’s retail shop, aside which stands a cooking school where guests learn the how to’s, then enjoy a three-course meal.

Next door stands the brainchild of the family’s youngest entrepreneur, Dietz Fischer, who followed his own particular passion to launch Dietz Distillery a year ago. Its primo product is an irresistibly smooth and aromatic Five Judges gin, with which we raised a “many happy returns” toast to Fredericksburg’s enchantments. For more info, y’all, see www.VisitFredericksburgTX.com.