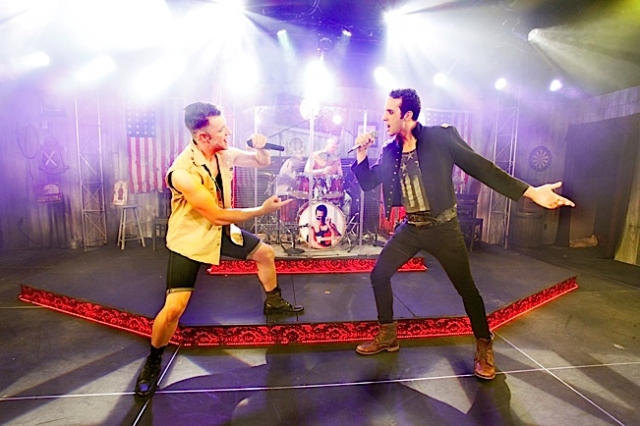 Avenue Q and The Book of Mormon gave credence to musicals that rely heavily on the snark factor and stereotypes at the expense of character and plot development. And audiences flocked to the former and are still flocking to the latter. Indeed, some argue that there is some truth in stereotypes.

Since Avenue Q, which actually is a good musical, lesser talents have thrown in their two cents. For example, the cowpunk, rockabilly musical, Bloody Bloody Andrew Jackson now in production by Minneapolis Musical Theatre at the New Century. As solid a company as MMT is, they have to make the best of the broad strokes this musical traffics in. Book writer Alex Timbers and composer-lyricist Michael Friedman have created a hyperbolic, simplistic ridicule festival of President Andrew Jackson, a man who most Americans know next to nothing about. And it cynically tries to milk lots of mileage and cheap laughs because of that general ignorance.

Yes. Jackson owned slaves. Yes. Jackson cruelly sent Native Americans to their deaths. And without a doubt, Bloody Bloody Andrew Jackson unmistakably shows him as a monster for doing this and the pronouncement of Jackson as an “American Hitler” is clearly and sincerely made toward the end of the show. (This, by the way, deflates the protests of those who claim the show makes light of the systematic deaths of Native Americans. It definitely does not.) You don’t walk out of the show enthusing about what a great President Jackson was. Moreover, ahistorical audience members, and god knows this country has millions of them, may well with think he was a meth head or a crack head.

And bothersome as this might be to the political correct and uncomplex, Jackson also took on banking centralization in a way no President has done before or since. He oversaw the expansion of the vote to non-landowning white men who most Americans wrongly assume had the vote since the 18th century. Yes, he was a patriarch, but he took on the more entrenched patriarchy that held sway in D.C. at the time. Like it or not, he raised awareness of how the constitution can be usurped by entrenched monied interests and wielded like a fundamentalist weapon. Hence, the populism which he is lauded for. Like it or not, Jackson has been seriously studied by historians and high ranking politicians of both major political parties for the bold things he did right by as well as the wrong. We are all circumscribed by our time! Even prophets.

In reality, Timbers and Friedman bend over backwards, as has MMT director Steven Meerdink, to portray the whites in the show as white trash stereotypes who hate Washington D.C. and have no regard for other races. They are obviously patterned after Tea Party extremists of our own day with a sense of meth addiction that has plagued so much of rural white America in recent decades.

The other group that is also insulted is persons with disabilities. Cheap laughs about disabled folks went out with the 1970s guys! And it was actually a Republican President who signed the Americans With Disabilities Act. As historian Kitty Kelley said, it was George H. W. Bush’s finest hour. (Full disclosure: I’m an admirer of Kitty Kelley and I make no apology.)

The MMT cast does precisely the job the script asks for. They nail the necessary overstated vaudevillian acting style, the over-the-the cowpunk sound, and excellent comic timing. Philip C. Matthews brings charismatic power to the title role and he has a fine voice. But the material does not take us toward a point of illumination. Don’t blame the actors. 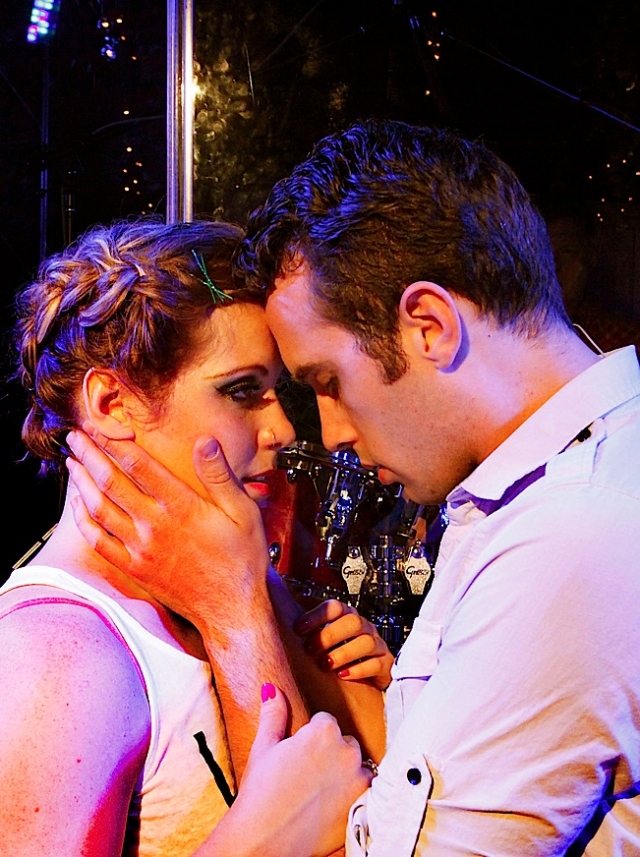 Ironically, I saw Matthews shine earlier this year in a splendid production of Tennessee Williams’s Orpheus Descending by Six Elements. Here’s where Timbers and Friedman could learn a lesson. In this play, Williams ruthlessly exposes Southern ignorance and shows how parochial pettiness mutates into the destruction of two sensitive souls. We laugh at the ignorant foolish attitudes of the townspeople but there is always a context and an ultimate illuminating aim by the playwright.

1. The gold standard in southern film satire is Robert Altman’s Nashville (1975) which does push the envelope admittedly. But it ultimately and unmistakably builds toward a jolting commentary on how the Me Generation mentality was invading not just the South but America in general. If you saw the film in Minnesota, Arizona, or Vermont, if you were conscious, you would have recognized its universality and not just attribute its exaggerated characterizations to the South. 15 years later Nashville came to be clearly seen as a prophetic film.

2. The Tom. T. Hall song, Harper Valley PTA, sung passionately by the wonderful Jeannie C. Riley, has a sensual free-spirited Southern mother reading the riot on act town mothers and fathers who judgementally take her to task while indulging their own “vices” themselves. Look her up on Youtube. Delicious!

MMT also trafficked in crude white stereotypes in the mean-spirited The Great American Trailer Park Musical. To be fair, such stereotypes are not discussed much, nor with much concern, even though identity politics is bantered about everywhere. But I take issue with that. If we are going to talk about communities of color, GLBT folk, women, persons with disabilities, etc. in specific identity terms that we claim are objective, then white straight people should be accorded the same. (Count the countless times straight white men are referred to as if they were all of the same class, income, and background.) Broad stroked characterizations without clear context and an effort at some sort of illuminating aim, justify subtle and brash dehumanization if done too long and unconsciously. And ‘unconsciously’ is the key word here.

The night I attended there was fundraising speech and an apology for the show to those it may have been offended, spoken on stage at the end of the show, right after the curtain call, with the exhausted singer-actors on the stage. It disrespects artists and audience. It’s something done at almost all MMT productions. Another case of unconsciousness. And it takes whatever wind out of the show that some people did experience. I can report that many in the audience did enjoy it the night I attended. What a buzz kill for them to have to listen to a speech – trapped in the theater!

Note: Take the lead from Theatre in the Round Players if you must. They have a board member welcome audience members to the show on stage before the performance who warns of safety issues, theater and electronics etiquette, a bit about the theater’s operation and basic needs. So there’s no buzz kill and no pandering. If the show is good, which it often is, then you leave feeling compelled to tell people about it anyway! You don’t need to be told.