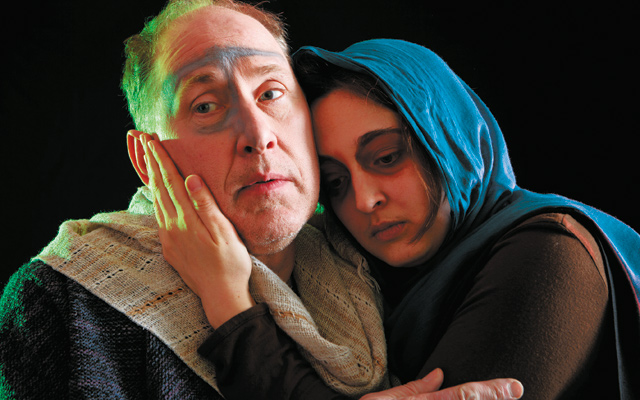 “The world of Camino Real is one of fear and of courageous personal gesture. The central conflict is between two forces. Power is represented by Gutman, his police officers, and Street Cleaners….Gutman and his associates deny the one remaining source of water to the poor and dispossessed, and guard against the forbidden word -Hermano- being spoken in public, where it might lead to an uprising or a revolution.”

-from A Playwright with a Social Conscience by Michael Paller

However, in 1953, Williams threw realism and dramatically structured storytelling out the the window with Camino Real (Spanish for Royal Road). Reviews were mixed. Some were severely negative. Its surrealistic vision of a fascist state countered by a wholesome All-American prizefighter made some equate it with the recent onslaught of the McCarthy era. Williams, who was familiar with Latin America first hand, would have been aware of Uncle Sam’s nontransparent connections to tyrannical regimes there. And of course, his publicly known homosexuality had only to have sharpened the xenophobia the play was met with.

In Camino Real naive innocence comes into a terrible awareness of dark forces and undercurrents that exist in the world – a moral education for the common man. The student is a prizefighter named Kilroy, which was a nickname for a typical American soldier. GIs would write in graffiti during World War II: ‘Kilroy was here’. The postwar plays of Williams, Arthur Miller, and William Inge, as well as Film Noir, often dealt vividly with men, primarily white, who could not adapt to the reconfigured post-World War II American society. Whether a veteran or not, it was the plight of many average white men of the time. Williams and Inge, both gay men, had a tender ineffable feeling for such men in ways that perhaps only a gay man can have. Heterosexual Miller and many Noir artists were certainly sympathetic, and often empathic, but in a different intangible way.

In Girl Friday Productions’ revival Eric Knutson plays Kilroy. He describes the protagonist as “a washed up champion boxer with a bad heart that is the ‘size of a baby’. Fearing death from one real hard kiss he leaves his one true woman, his wife, and works as a merchant marine until he picks up tropical fever on a rotten tub. This forces him off the boat and onto the Camino Real. Kilroy is a man trying to survive at any cost. It isn’t until he is stripped of everything from his dignity as a man to his past glory that he realizes what is most important in life: waking up in the middle of the night and feeling the warmness of the one you love – the one you’re used to and the who you know loves you.”

Unfortunately, there’s nothing royal or noble about the Camino Real. The name is ironic. Williams’s setting is a no man’s land dictatorship where people go when their luck or life’s purpose has run out. The sense of time, history, fiction, and reality are all simultaneously  suspended and intertwined. Iconic literary characters are transplanted into this military police state: Marguerite Gautier as Camille and as The Lady of the Camellias of Alexandre Dumas’s novel, and central character of Verdi’s opera, La Traviata; Marcel Proust’s Baron de Charlus; the idealistic Don Quixote and his squire Sancho Panza originally penned by Miguel de Cervantes; Esmeralda, a gypsy from Victor Hugo’s The Hunchback of Notre Dame.

Additionally, there are towering figures from literary history: Lord Byron and Casanova whose romanticism and libido don’t serve them well on the Camino. Dramaturg Christine ‘Kit’ Gordon explains their roles: “these down-at-heel visitors to the Camino remain privileged in some sense, while the town’s inhabitants and street people struggle to survive. Into this mix, Williams brings Kilroy, a quintessential open-minded and golden-hearted American, who must confront both western history and developing nation stress in his time on the Camino. The play reflects Williams’s own concerns when it was written in 1953 but the questions he raises about power, love, and sacrifice remain critically relevant in the 21st century. By bringing together history and fiction to play with and against one another, Williams articulates the many-leveled nature of our lives, not only informed by who we are and what we know but also by what we dream.”

Two other icons the playwright injects were originally penned by Dumas. Kimberly Richardson plays Prudence and Sally Ann Wright plays Olympe. Richardson observes “Prudence is an older lady who sponges off her younger, more successful friends. Olympe is a courtesan like Camille, who is jealous of Camille’s beauty and success with men. Both are fair weather friends of Camille, and in the Garbo film both extort money from Camille when she is morally ill. I think in Camino Real, Olympe and Prudence have dead-ended together. They live together and carry on a friendship out of necessity. Their relationship is like the evil stepmother and evil stepsister stuck together at the end of a fairy tale, forever. Prudence has lost her mind and Olympe takes care of her, at least minimally. Prudence seems haunted by Camille’s tragedy and her role in it But ultimately, like almost everyone on the Camino, she is out for herself.”

Wright adds “on the Camino Real there doesn’t seem to be an abundance of true affection and the world of the courtesan was so dependent on physical beauty and wit. It must have been enormously competitive. With age, Olympe and Prudence have lost these essential qualities and don’t know where to turn to next. Hence their presence on the Camino Real.”

Director Ben McGovern says Camino Real “doesn’t seem to follow any of the rules that you’d expect even the most ornery play to follow, and yet it manages to transmit a steady flow of images, stories, feeling, characters, philosophic proposals and comedic punchlines. The play is constantly shape-shifting and it feels as if the only constant is its reverence for mystery and questions without answers.”