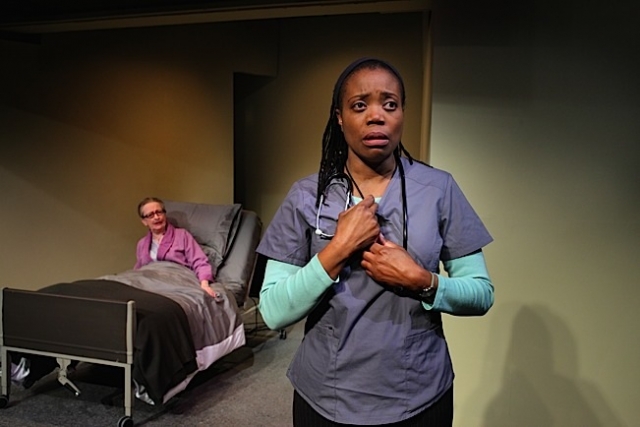 Generosity can be a virtue and when channeled into pockets that can put it to good use, both the spirit of generosity and the treasure it doles out, can make the world a more harmonious place. However, Maxine doesn’t see it that way.

She’s bitter and twisted as she indulges in hypochondria and psychological abuse like thunderbolts from Mount Olympus from her nursing home bed. Financially wealthy, grudge-bearing, and conveniently cynical, she has turned manipulative personality traits and withholding her purse strings into a sort of fine dark art. Maxine is a female King Lear who expects all to pay fealty to her ego. Her chronic distrust of the poor of all races and nations and her obsessive need for security have a uncanny way of expanding the negativity of those around her exponentially.

In Death Tax playwright Lucas Hnath has crafted an clever commentary on how a culture rots from the top down, with the powerful (in this case, Maxine), psychically infecting those financially beneath. Lear manipulates three daughters. Maxine manipulates a daughter, a grandson, and an employee of her daughter’s generation and fallout is suffered by them and by extension, others left in her wake. 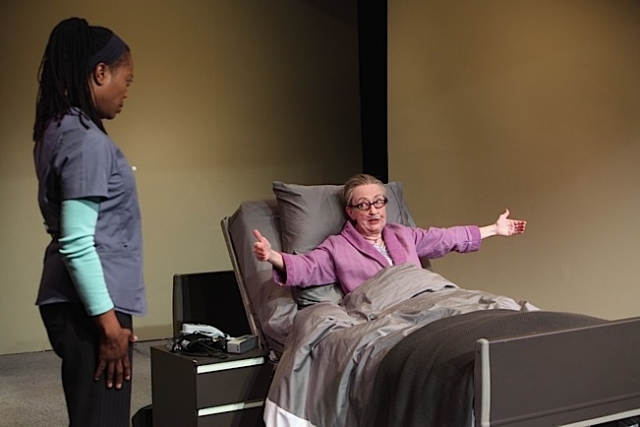 In Hnath’s comedy, Maxine (a bruisingly harsh and wickedly witty Wendy Lehr) cuts a corrupt and corrupting financial deal with Tina (Regina Marie Williams), her nurse, out of pure spite against her daughter. She has turned the withholding of money from her struggling daughter (Tracey Maloney) and little grandson into a sick power game. Everything the daughter does is wrong, not good enough, etc. And this has been their relationship from the start.

Indeed, there are parents of means who genuinely hold that their offspring should make it absolutely on their own. Though such attitudes can and should be argued at length, Maxine does not act from this principle. She acts out of punishing her offspring for simply being born and she grossly lacks the insight to grasp that this is her tragic inner flaw. Given her lifetime of privilege, comfort, advantage, and access, this is hard to set aside or overlook.

Hayley Finn has directed the actors with a sharp eye and probing sense of what their motivations truly are, so it has the pleasing effect of an edge-of-your-seat mystery thriller. Clarence Wethern lends strong support as a nursing home administrator. Lehr is bold and brave in putting forth the grotesque side of a woman who many would automatically cut slack for. She dares to reveal what’s really beneath the surface.