We Are All Ebenezer Scrooge

For 52 of 56 performances of A Christmas Carol in 2017, Nathanial Fuller is the iconic miser-cum- misanthrope, Ebenezer Scrooge. It’s a demanding role, even for Fuller, who has Scrooged five times before, and who earlier this year shared the royal crown with Stephen Yoakam in the Guthrie’s harrowing King Lear.

Five previous Guthrie Scrooges (a.k.a. the “Ebenezer Club”) concurred on Carol’s exigencies in a recent Star Tribune interview, Peter Michael Goetz recalling, “You’re running up and down a staircase…keeping your breath control is always a major concern. I’d be panting… It’s grueling, like Hamlet or Willy Loman.”

Fuller corroborated, “There aren’t quite as many lines as Lear, but Scrooge goes through the whole gamut of emotions. He goes through a great deal of pain, when the past is brought up and he has to confront his own death. Then, when he’s converted at the end, he’s insanely happy.” 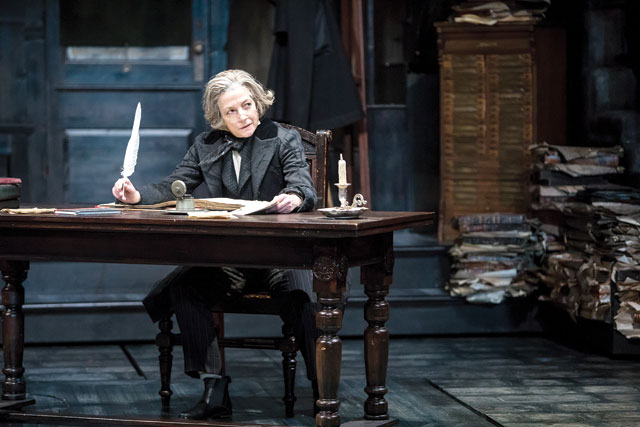 So, as is often done in taxing parts, it was planned ahead that Fuller’s understudy would step in for four performances. The understudy, Charity Jones, knew Carol well, and had in fact—bedecked in golden curls, flowing white gown, and tiara—performed Ghost of Christmas Past to Goetz’s 2003 Scrooge.

Lauren Keating, associate producer for the Guthrie Theater and Carol director, explained her gendered casting choice: “I’m looking for the strongest, most versatile actor, who best understands the story I’m aiming to tell. Charity is all those things in spades.”

Keating added that there was no explicit casting plan, “But much like color-conscious casting and diversity in our companies of actors and designers, we are committed to seeking the strongest artist for each and every role—again, to bring the highest possible quality of work to our audience.”

“To speak for the Carol company, we’re all incredibly excited,” Keating said. “We’ve had the opportunity to do a run with Charity in the rehearsal room, as well as a tech rehearsal. I have found the atmosphere to be electric when she’s onstage.”

It definitely was at Jones’ debut. She lacked nothing in stamina, steely-eyed skinflintedness, distaste for humanity in general and the poor in particular. Her “Are there no jails? Are there no poorhouses?” chilled.

The distinction between understudy Jones and Fuller’s Scrooges was not one of gender, but of simple physical stature, a factor that lent unexpected emotional power to Jones’s performance. Though agile on the staircase, the slighter Scrooge hinted at the vulnerability behind his bulwarks against the world. Beside Tiny Tim, the two illustrated a heartbreaking shared mortality, while the reformed Scrooge’s happy jig was light, ethereal, evoking Fuller’s “insanely happy” comment.

The draining hourglass, the urgency of Scrooge’s plight, were intensified by Crispin Whittell’s lean adaptation of the Dickens novella. Leaving enough traditional dancing and jollity, it was made clear that Ebenezer stood at a mortal crossroads: would the empty chair, the abandoned crutch, his unattended funeral be the future?

Jones performed with pathos and panache. As the standing ovation rang out, the Ebenezer Club could proudly claim a new member.