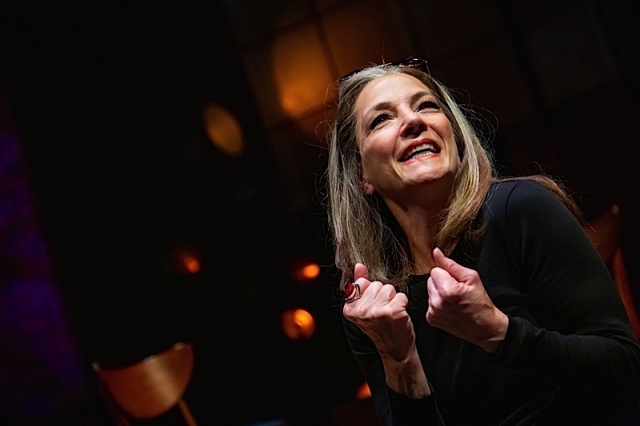 St. Paul’s History Theatre has been redubbed the “Herstory” Theatre for its current season of plays that celebrates women. The area premier of Gloria: A Life definitely lives into that in celebration of the life of feminist activist and co-founder of Ms. Magazine, Gloria Steinem, written in glowing terms by Emily Mann. Charity Jones radiates elegant assurance in the title role. Congresswoman Betty McCollum introduced the production on opening night.
Risa Brainin has directed a winningly righteous all-female cast, all of whom crisply play multiple roles with variation and range. Joel Sass’s attractively functional set invites fluid stage movement so the actresses can flow seamlessly into the numerous scenes the play is composed of. 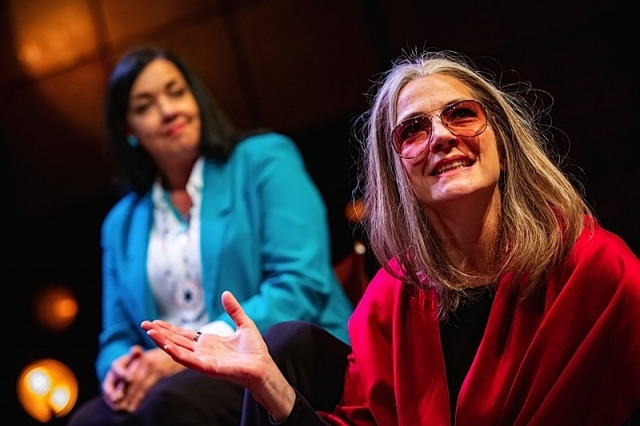 George Keller is a standout as Wilma Mankiller, Chief of the Cherokee Nation, and Lolly Foy as New York Congresswoman Bella Abzug, one of the progressive movement’s most beloved and fiery figures during Sexual Revolution and anti-Pentagon efforts a generation ago. Abzug introduced the first federal gay rights legislation in 1974, which would have added sexual orientation nondiscrimination into the Civil Rights Act of 1964. She and Steinem were passionate advocates of the Equal Rights Amendment (ERA) of the same period, neither of which were made law. Yet these unsuccessful attempts both paradoxically helped to strengthen and widen the progressive base which has now become a force to be reckoned with politically. Look at how what both legislative proposals basically advocated are right now at center in today’s political arena. 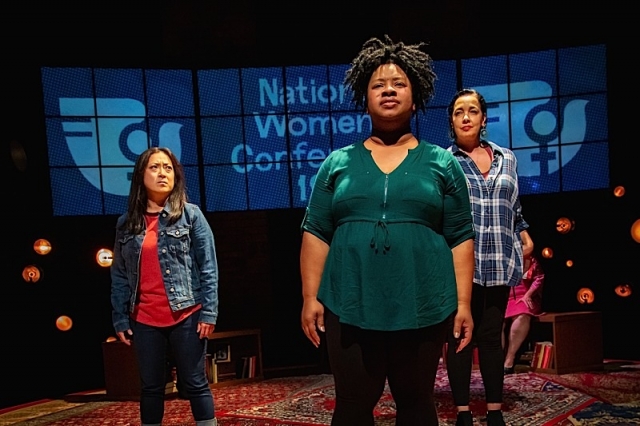 The entire cast vibrantly infuses Mann’s rhetorically driven language with human passion. The playwright has ingeniously blended the style of George Bernard Shaw with the philosophy of Saul Alinsky. The second act of Gloria: A Life is a circle session of truth-telling facilitated by high profile feminists—a nod to Native American culture and China’s Cultural Revolution. Here’s a play that breaks the rules of how plays are presented. One can’t help but think of the title of Steinem’s book,Outrageous Acts and Everyday Rebellions.
Mann deftly covers highlights of Steinem’s life from her time as a young features writer and Playboy Bunny all the way to recent years of forwarding intersectionalism as a form of strengthening the influence of identity politics; to strengthening restrictions on gun ownership; and standing tall and without shame on abortion rights. Mann, to her credit, does not address that last issue in euphemism. She uses the A-word forthrightly and her play makes a strong stand for Planned Parenthood. Not surprisingly, “I Am Woman”, sung by Helen Reddy, is heard at one point in C. Andrew Mayer’s nostalgic soundscape. 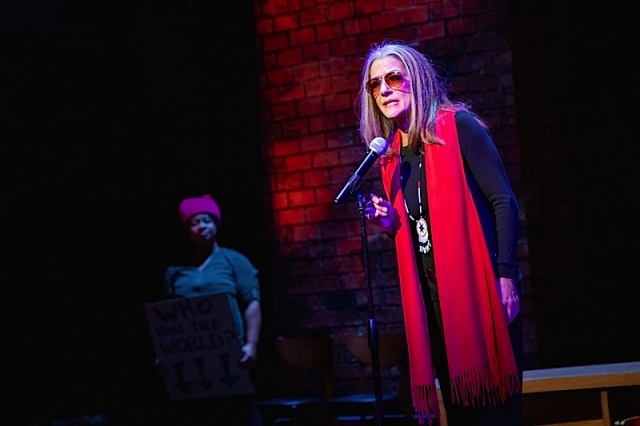 Mann is also very honest about what has become Steinem’s fabled disdain for the straight white conservative man. Her play glistens with skin-crawling stories about her first-hand experiences, such as objectifying comments made to her by authors Gay Talese and Saul Bellow in a cab 56 years ago, systemic marginalization of women journalists, and the centrality of black women in Second Wave Feminism—a tall stand against both sexism and racism. Miko Simmons’s projections reinforce this with gusto. Along, of course, with images of euphorically credulous white women in 1950s advertising.
Parts of Steinem’s record are not aired, however. Her comments on transgender people during the time they were referred to as transsexuals were very hurtful and still cause anguish. Steinem’s time in the CIA is not mentioned, though she herself has written about it. Groundbreaking author Jacqueline Susann’s withering takedown of the icon because of what Steinem wrote about her is unaddressed. There’s no mention of the consequential face-off between feminist icons Betty Friedan and Cosmopolitan‘s Helen Gurley Brown, which was perhaps the biggest internecine rift in American feminism until the Dworkin-MacKinnon anti-pornography movement. Rifts that Steinem was certainly apprised of and of which, divisions are still felt.
There’s also the sticky issue of the Reagan ’80s being characterized as oppressive. The ’80s are a mixed bag, to be sure. Gay men of an age in that AIDS crisis era will likely attest to that, along with feminist spirit sisters. But Mann doesn’t mention in her overview—and Gloria: A Life is a dazzling overview—that President Reagan appointed Supreme Court Justice Sandra Day O’Connor and UN Ambassador Jean Kirkpatrick. The first women ever in those positions. 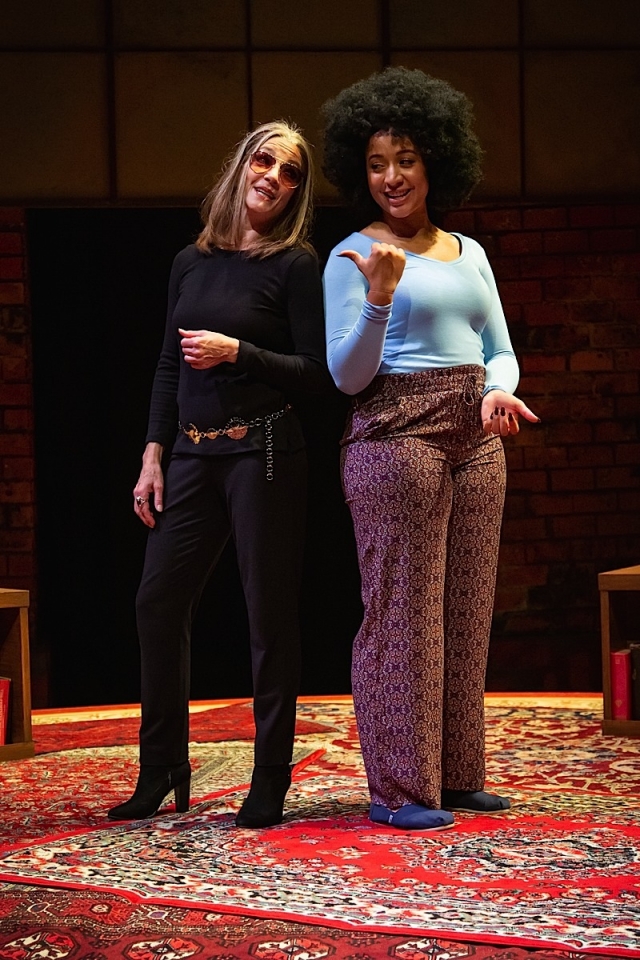 At one point near the play’s end, Steinem makes a hard-to-refute generalization about the rigid role of masculinity, but it’s not developed. Perhaps that’s something for another feminist playwright better suited to that inquiry. Mann’s style, after all, is its own, and that’s why people as so drawn to her work. With Gloria: A Life, she’s even more hagiographic than her best known play, Execution of Justice, which looks at the 1979 Harvey Milk assassination and subsequent trial. San Francisco city politics, assassin Dan White’s psychological complexity, and Milk’s close bonds with California State Assemblyman Willy Brown and cult leader Jim Jones of the People’s Temple infamy are themes unexcavated. That said, Mann stands reliably tall for rights activists against those she perceives as their “haters”. As a playwright she definitely fulfills a need.
That said, she should also be commended for another work which Gloria: A Life stands on the shoulders of. Mann lets the characters speak authentically, drawing from real life experience of the subjects in her stage and teleplay adaptations of Having Our Say:The Delany Sisters’ First Hundred Years. The wonderful tele-film stars the late, great Diahann Carroll and the great Ruby Dee. Carroll (Claudine, Eve’s Bayou) passed away just this month. Dee (A Raisin in the Sun, Jungle Fever), five years ago. See their marvelous classic films, which includes the one Mann adapted.
It should be recalled that Mann’s directorial work can be profoundly authentic and lyrically nuanced. For example, her 1979-80 season Guthrie Theater staging of The Glass Menagerie still rates in my mind as the greatest production I’ve ever seen of that looming classic, and I’ve seen many. I’ve never seen a better Tom than hers: Jeffrey Alan Chandler. And Barbara Bryne’s Amanda was magnificent. Second to none.
Gloria: A Life
Through Oct. 20
Herstory Theatre, 30 E. 10th St., St. Paul
651-292-4342
www.historytheatre.com