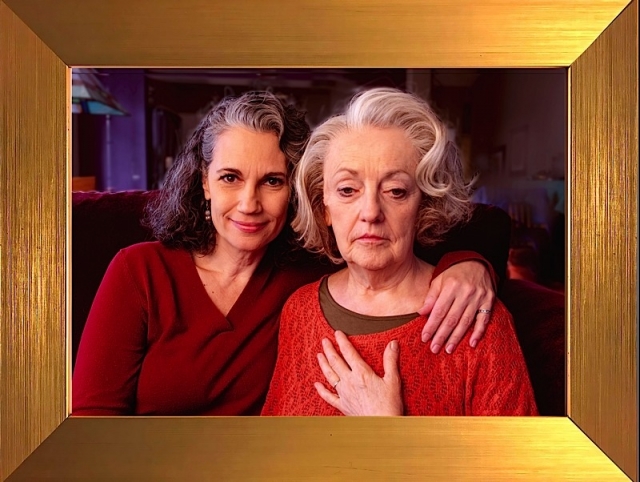 The psychic effects of Alzheimer’s are treated in the play by an artificial intelligence (AI) method called “Prime”, not the same name as the theater troupe presenting the drama by gay playwright Jordan Harrison. Prime uses holographic technology to replicate major figures from the patient’s past in order to restore forgotten memories and resolve conflicts with the dead.

In the first scene, Marjorie sits and chats with a man played by an affable James Rodriguez who one might assume is her son or oldest grandson. However, it is a replica, known as a “Prime”, of her long deceased husband, Walter. As this play—written in the style of Rod Serling—unfolds, it causes what are traumatizing effects on Marjorie’s daughter Tess, whose husband Jon has essentially been re-installing her lost memories as mediated by him. (Others get to reshape her personal story.) The conflicted interaction between the couple by Laura Stearns and Andre Shoals is crisply portrayed. Thankfully, what seems like a gap in the playwright’s grasp of the gravity of what he has written is filled out by the actors with a sense of humanity. Harrison floats a generalized notion that that since memory can play tricks on us, then maybe absolute truth is unknowable. But is this an excuse to not discern where technology unchecked is leading us?

The playwright isn’t too interested about what the endgame may be of the technicians, innovators, and stock stakeholders who provide and profit the Prime technology. But most importantly, the rights of vulnerable adults are not examined sufficiently. The irony of flesh and blood actors playing artificial facsimiles of real people may by default be the most powerful element of Marjorie Prime.

Harrison was a 2015 Pulitzer Prize finalist for this drama. PRIME Productions in just a few short years has come to be a topnotch theater company. Their focus is on plays about older women.