Vu with a Room in Louisville 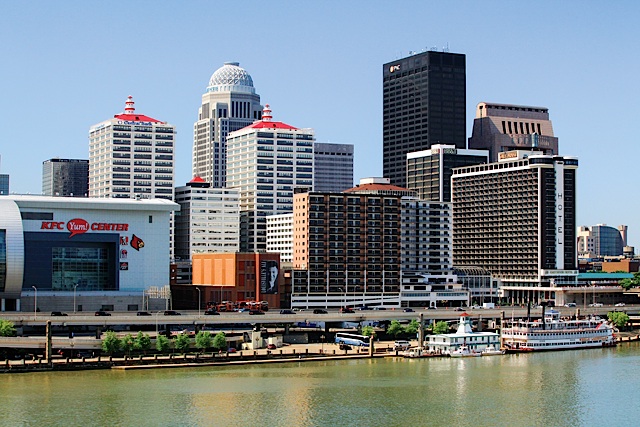 Louisville is one of the 10 hottest gay destinations in the USA, declares Orbitz, and George Stinson can claim some of the credit. Well-known for opening the Connection, a gay nightclub, and his Marketplace restaurant complex, in late 2016 he debuted Vu Guesthouse, a tobacco warehouse-turned-sexy boutique hotel. You’ll spot it (even from Mars) by its blaze-orange and flamingo-pink exterior, guarded by two sculpted lions.

Its lobby sports what may be the largest chandelier in captivity, plus an ebony grand piano, mirrors, flowers, and enough bling to make Liberace look like a modest Quaker. Curvy hallways lead to its 19 rooms (15 more in the Annex), climaxing in a king suite sporting a bed that would improve Versailles, set against fuchsia walls under a high black ceiling.

Vu-land occupies an entire city block, complete with interior parking, a spa, patios, and a pair of restaurants: the casual Eatery 823 and white-tablecloth Table 817. There’s also a theater/event space to seat 1,000 nearing completion, scheduled to stage a major drag pageant on its opening weekend July 27–29 (www.vuguesthouselouisville.com). 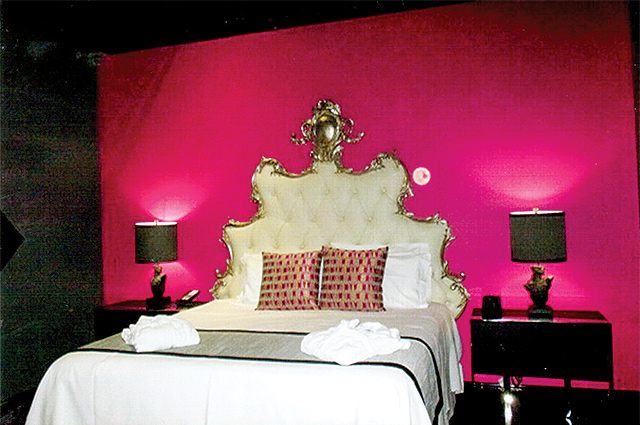 While you’re in town, check out Pandora Productions, presenting theatrical pieces that speak to the GLBT crowd, as do Voices of Kentuckiana Chorus and Gay Men’s Chorus. Then head to the clubs. Play is the newest and hottest dance party venue in the city, with drag shows nightly. A cluster of gay bars anchors a single corner in the Highlands, leading off with Chill Bar, laid-back and mellow. Nowhere Bar draws a younger, more casual crowd with dancing, pool tables, and an inviting patio, while Big Bar (big as your average closet) is a cozy, classy site hosting a clientele that’s more mature and professional. Not far away, The Planet invites lesbians to kick back in its spacious lounge and enjoy live music.

You thought the Derby was big? Well, how about Pride? Louisville boasts not one, but two festivals: Kentuckiana in June on the waterfront of the Ohio River, and Louisville Pride Festival in September in the heart of the Highlands. For info, visitwww.GoToLouisville.com/Compassion. 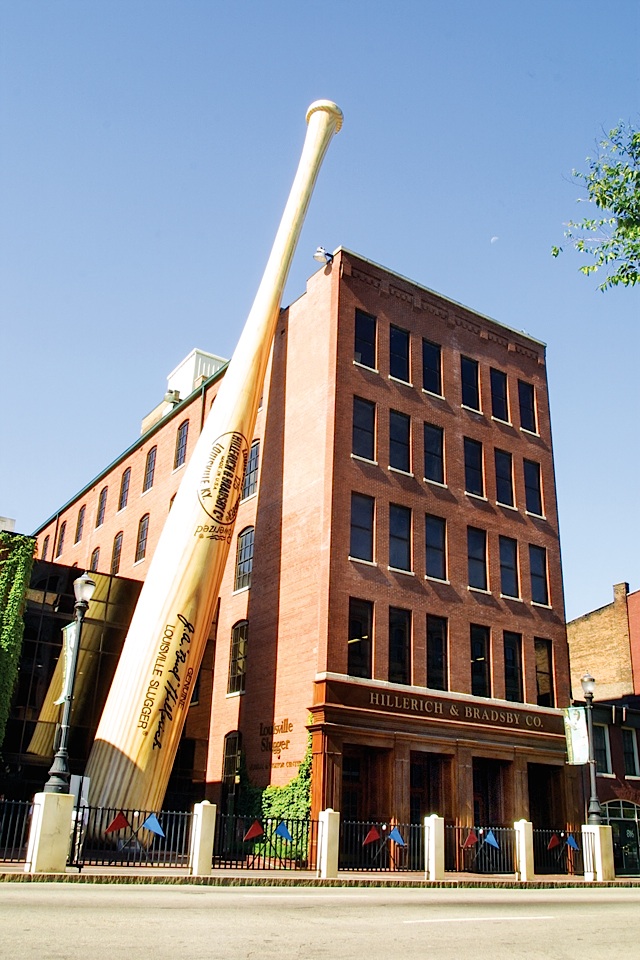 Main Street makes it easy. As Louisville’s cultural corridor, visitors easily can hoof it from one arts venue to the next. Start at the renowned Actors Theatre of Louisville, where, every spring, critics from around the globe flock to the Humana Festival of New American Plays to catch six shows in a single weekend (visit www.actorstheatre.org and you can too). I enjoyed the ditzy I Now Pronounce, about a wedding reception going as awry as it can get; Cry It Out, the touching and comic commentary on new moms’ choices; and Recent Alien Abductions, a dark story of a family’s past and present violently colliding.

Follow Main Street to KMAC, the Kentucky Museum of Art & Craft (super gift shop, too). Nearby, the Muhammad Ali Center details this hometown hero’s path from boxing ring to Vietnam War protester. Louisville Slugger offers factory tours along with baseball history and chances to try your skills at bat or on the mound. The 21c Museum Hotel’s anniversary exhibit honors works from alienated people, from Cuba to Ukraine to South African prisons.

Then for a bigger helping of artworks, head to Old Louisville to the recently reopened Speed Art Museum, now doubled in size, allowing works in storage to gain gallery space, as in the collection of Southern Outsider art and photographs, along with masters old (Rembrandt) and new (Chuck Close’s 2012 portrait of Obama).

Back on Main Street, take a break to tour and sip Kentucky’s other art form, bourbon, at several new downtown distilleries. That’ll set you up to head to Churchill Downs, where visitors can catch a race or ten during the three-and-a-half-month season — or mill around on Derby Day. All year, behind-the-scenes tours invite visitors to scope out the racetrack, Millionaire’s Row in the grandstand, the 14 horse barns, and more. Then pop into the Kentucky Derby Museum to learn the makings of a thoroughbred; salute past winners; study the life of a jockey, trainer, hot walker, vet; and ogle a wall of famous Derby bonnets. The tour includes a surround-screen showing of Derby Day, climaxing in a song more dear to a local’s heart than the national anthem: “My Old Kentucky Home” (BYOH: Bring Your Own Hankie). 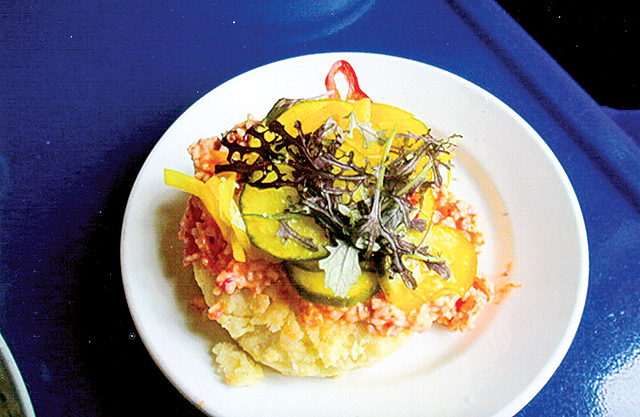 All the foodie mags are hailing Louisville as the new dining Mecca of the South. No surprise to this visitor. Basically, it’s good ol’ Southern cooking with a splash of bourbon. Line up at Check’s, a corner dive since 1944, serving fried oysters, fried chicken livers, fried bologna sandwiches, and other culinary icons. That’s the drill at Wagner’s too, cooking up breakfast grub aside Churchill Downs since 1922. Your biscuits and sausage gravy come with a side of people watching, as the horses’ trainers stop in for eggs over-easy and a bottle of liniment.

At Corner Bar in the new Aloft Hotel, demand the pulled pork bourbon tacos. Proof, in the 21c, serves killer grits, dolled up with bleu and gouda, pickled peanuts, and jalapenos. Continue your grits education at Gralehaus, where they’re laced with cheddar. Order a pimiento cheese-and-pickle sandwich on the side, or the biscuit with duck sausage gravy and maple syrup, duck cracklings, and a sunny egg.

Then address the grits, as in shrimp and grits, at Fat Lamb, the new hot spot, also justly famous for its lamb ragu. And fried oysters. And Brussels sprouts. Butchertown Grocery also majors in shrimp and grits, along with don’t-miss dishes like chicken and waffles and a maverick Benedict of porchetta and kale astride a mega-biscuit. At Goss Avenue Bar in Germantown, it’s burgoo, a traditional country beef stew with a shot of heat. And at Hi-Five, it’s all about donuts. Famished? Visit www.gotolouisville.com and come away smiling.