A Vivid Rendering of Genet Classic at Phoenix Theater 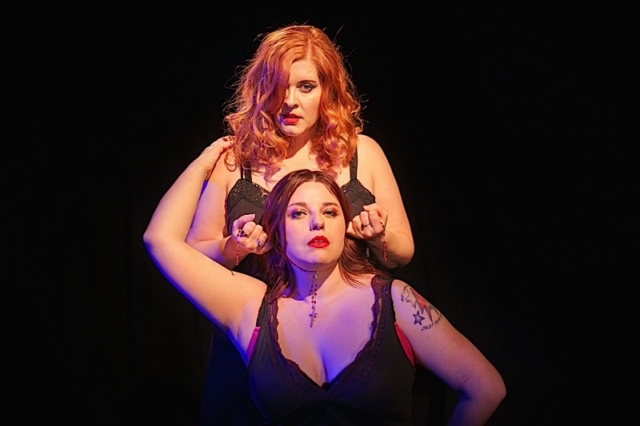 The Maids is a play for actors who love a challenge, so much so that there are actually two local revivals of the absurdist French classic this month. Renegade gay playwright Jean Genet, whose life spanned most of the last century, spent a great deal of time in prisons for theft and prostitution. His very own life lived on the margins was his teacher. Therefore, it’s no wonder that the dark news story of the Papin sisters, two maids who murdered the wife of their employer and their daughter, would seize his imagination.

The Maids is not a recreation of the crime event itself. Rather, the Papin sisters sparked Genet’s imagination to form a meditation on the way subservience taken to extremes recoils upon itself. At the Phoenix Theater, Jenna Papke has directed a vivid rendition that scrupulously mines the complex dominant/submissive roleplay central to the text between maids, Claire and Solange.

Nichole Carey and Katie Starks are terrific as they interact with an inside code of innuendo that veils their transgressive motives. The actresses elicit a palpable sense of what has long been callously regarded in Europe as “low birth”, and how that socially assigned status permeates one’s psyche from birth—a conditioning element that served the continent’s class system.

In luminous contrast, Kelly Nelson epitomizes glamorous elegance as Madame, the woman of privilege they serve. But this is Genet, so her status seems as shaped by criminal cartel connections as traditionally formal bloodlines.

Scenic artist Andrew Lester has evoked a cryptically splendid atmosphere of opulence turned tatty. It’s as if the house’s very surroundings have diminished in concert with the maids themselves as they seem to go down the rabbit hole that would cave in to murder most foul.