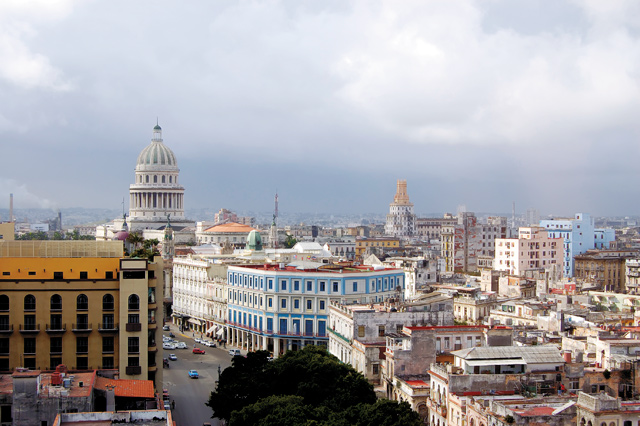 I’m riding shotgun along the city’s main avenue at 50 mph in a 1959 Dodge, inhaling the sultry sea breeze that fans the Old City’s contagious energy. This is Havana, where time is frozen. “Muy bonito!” sings out Rafael, owner of this gypsy taxi, as we sail past once-glamorous facades of crumbling stucco and rusting balconies.

The next night, my ride is a vrooming ’55 Chevy, pridefully shined and polished—another cog in the city’s rolling museum of  ’50s autos, which their owners cherish more than their girlfriends. (A third drive in a tinny ’83 Russian Lada offered a rattling reminder of the U.S. embargo during the Cold War.)

When the Russians ended their aid, times turned tough. But nowadays, Cuba is climbing out of the austerity of that “special period.” Yet there are still few pesos to spare. Cubans stand in line with their ration books to pick up food, and their seriously gorgeous, scrolled and columned mansions, now sub-sub-divided for multiple families, are leaning into the cobblestones.

Canadian and Russian tourists flock here, mostly for Cuba’s beach resorts, but Americans cannot just hop a plane. I’m here the only legal way, as part of a government-sanctioned people-to-people program offered by several tour companies that focus on interacting with locals rather than simply drinking rum and shopping (though we managed plenty of both).

First stop, right off the plane from Miami, was Revolutionary Plaza with its larger-than-life portraits of Che and other heroes. This is where Fidel Castro delivers those six-hour speeches. Soon we’re wandering into Romeo y Julieta, a time-warp shop where the primo cigars bearing that name are sold. It’s now government-owned, as are many shops, restaurants and hotels. Next, we gawk at the Capitolio, which looks (ahem) exactly like its counterpart in Washington, D.C., except for the fleet of ’50s autos parked in front. 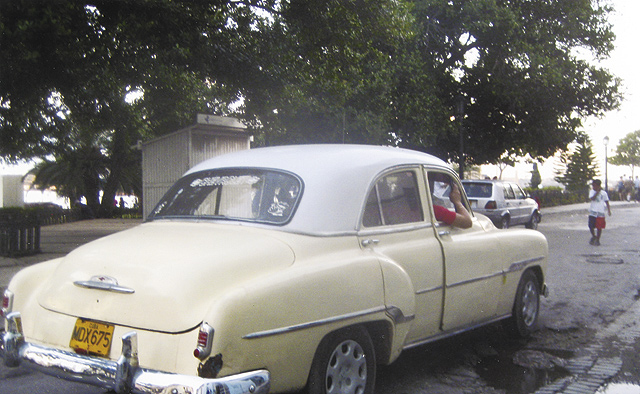 Daniel, an architect involved in renovating Old Havana’s 3,400 historic buildings, leads us on a walking tour, starting in the Plaza des Armas, lined with open-air bookstalls under rows of Royal palms, aside the fort of 1577 erected by Spain after the first tourist, Christopher Columbus, landed here. The ornate Governor’s Palace of 1774 is now a history museum.

Cathedral Square surrounds a graceful Cuban Baroque church, today more known for the nightlife on its plaza than the services inside. Religion is once again legal here, says Daniel, but few are Catholic these days. We return for lobster dinner ($12) under the stars, after exploring the narrow surrounding streets, seduced by the live music performed by gents in straw hats in every bar and café.

We wandered to Plaza San Francisco the next evening for more seafood and tunes. By day the grand plaza—once a slave market and headquarters of the sugar trade—was pulsing with street troupes sashaying along on stilts. Inside the church, now a concert space, young cellists rehearsed a string quartet.

Following the music once again, we headed for a couple of Hemingway haunts, starting with the Pepto-pink Floridita, the hotel where he slept and sucked down daiquiris. Next, the livelier Bodegita, where fans of Papa clamber to the rooftop bar to sample his favorite mojito under his portrait, heeding his motto, inscribed on the wall—Carague con su pesao (Carry your own weight)—amid signed photos of devotees like Harry Belafonte. As the band played the obligatory “Guantamera,” we scrawled our own names among the hundreds on the walls.

Hemingway isn’t buried in Cristobal Colon Cemetery, but his favorite bartender is, according to Octavio, who imparts this and other spicy gossip as we tour the fantastic marble mausoleums of the 144-acre cemetery. (Namesake Columbus was later ferried back to Spain.) Will Fidel be buried here, we ask? “”It’s a mystery,” Octavio intones with drama.

“Spicy” might be the polite adjective for the decades of Mafia rule, during which the iconic Hotel National was Ground Zero. Today we head there for a performance of the venerable Buena Vista Social Club, whose close harmony is rivaled by a pair of closer-fitting dancers—he in ice-cream suit and fedora, she of the never-ending legs. 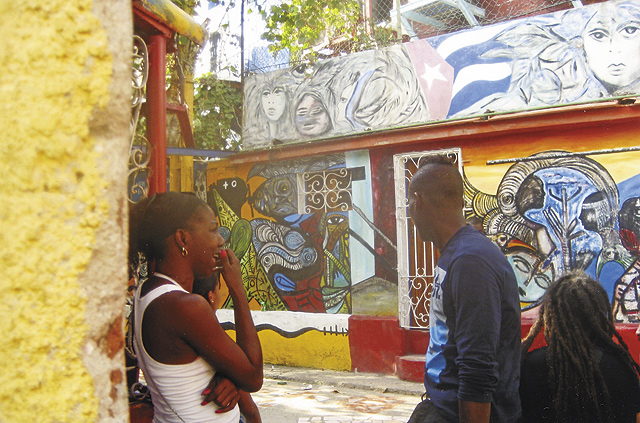 Havana’s art scene is just as out-there as its music. We feasted our eyes at the Taller de Serigrafia, a workshop of graphic artists turning out arresting, modern prints. Then we followed Omar, who guided us through the classy Bellas Artes Museum, tracing Cuban art from the era of the conquistadors to, well, tomorrow.

Art of a different, and no less exciting, sort blooms in working-class neighborhoods, too, in projects like Colorado Mi Bari, initiated by activist-artists like our guide, Mario, a young ex-con who’s turned his life around as a rap musician (“only good words”). Together they cleaned out a garbage dump and installed a center to teach kids art and music. They also filled the streets with found-art sculptures (think: tire rims) and flamboyant murals celebrating life. In another neighborhood center, six-year-old ballerinas twirled onstage for us, followed by young mimes and heartthrobs-in-training, crooning about amor.

At the opposite end of the social spectrum, eminent ceramicist Jose Fuster not only transformed his house in the classy Jaimanitas neighborhood into an Alice in Wonderland collage of cheeky mosaics, but also transformed many of his neighbors’ walls.

Rebel Afro-Cuban artist Salvadore Gonzales lives deep in the hood, where his home, and art, honors the Orichos (gods) of the African Santorio religion with altars and portraits. We wave “hola” to the guru himself, smoking a cigar with his buddies. Sunday afternoon is Rumba Day on the street, so we shake it with the locals. 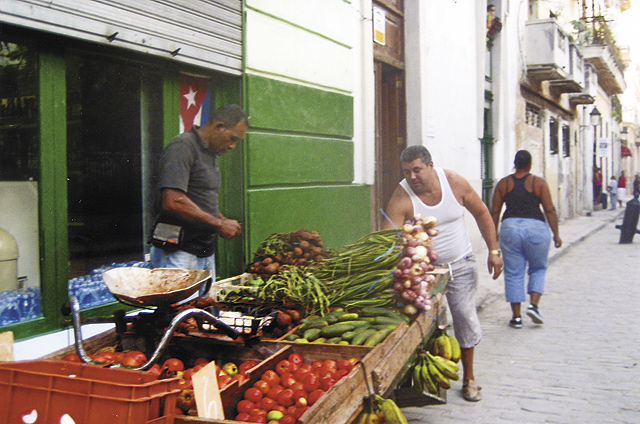 Fresh produce is in short supply in Cuba. Photo by Carla Waldemar

It’s all part of the people-to-people deal, which continues as we drive into the countryside to visit a tobacco grower, who teaches us to dip cigars into a glass of rum, then on to an organic farm, a practice favored by Fidel, supplying produce to government enterprises.

Passing horse-drawn carts—the transportation of choice on the highway, where hitchhikers line the pavement—we approach Santa Clara, a town where Che pitched battle and is buried, close to a mammoth memorial statue. The sleepy town square, dating from 1689, boasts a gracious Spanish mansion, now Museum of Decorative Arts, complete with original crystal chandeliers and mahogany furnishings. Beside it stands the frilly Opera House with its tiered balconies, gorgeous as any in Italy.

We trundle on to Remedios, a town where time has hardly ticked since its founding in 1514, anchored by  a Baroque cathedral and its gaudy, gold-paved altar. Although Christianity is not the forte here, December 25 nonetheless is. That marks the 24-hour finale of Pandares, a festival in which two neighborhoods vie for top honors in fantastic float-making, a la Mardi Gras. We visit a workshop where volunteer doctors, architects, taxi drivers and who-all are laboring with plywood, Styrofoam and millions of colored lights to complete their secret display for the big day, which concludes with fireworks and a grand party.

Okay—so Canadians head for the beach. Well, for our final day, we did, too—toasting at a resort where the waves lapped in time to the rumba as the rum flowed on.

Homophobia was once the norm, but it’s dying a quick death. Gay tourists are welcome, especially at the beach resorts of Vendado. Havana boasts a lively Pride Parade.

Americans must visit via a people-to-people program, offered by many tour operators, such at my choice, YMT (ymtvacations.com), the most economical of those I researched. You’ll need a visa, which they supply in Miami, where the tour originates. Credit cards are not accepted, but American dollars are good for tips and vendors, although cafes and taxis prefer the tourist peso. Cuba is clean, safe and oh-so-friendly. Get there before casual travel becomes legal and Starbucks and Radissons ruin the scene.