Place and time: the English Channel island of Guernsey, 1943. This British island was under the occupation of Nazi Germany at the time. Some fled. Some were killed. Those left behind, obviously had to navigate prickly relationships with occupying troops.

When a handsome young man is washed upon a shore totally naked and unconscious, a Jewish woman, Lilly, and a girl, Estelle, secretly usher him to their house. Jeanne, Lilly’s widowed mother-in-law and Estelle’s mother, is horrified because it will be seen as harboring an enemy. When the man finally comes to he speaks both fluent German and fluent English but he has no memory whatsoever of who he is or even what is name is. Juvenile Estelle dubs him Gabriel and sees him as an angel manifested from her imaginings. 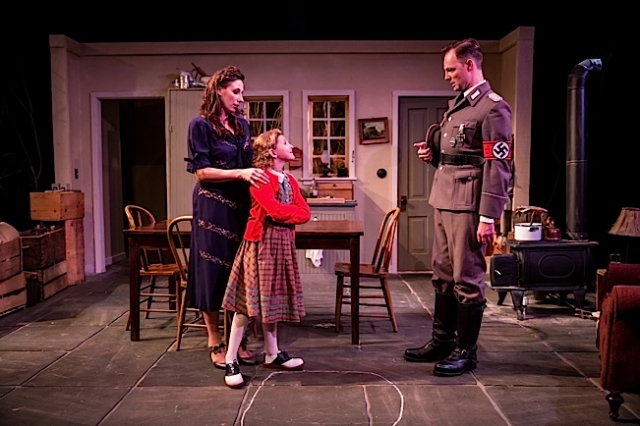 Moira Buffini’s play, Gabriel, keeps you guessing right up to the finish, which is a mark of its worth both as entertainment and as art. Amy Rummenie has directed a cast for Walking Shadow Theatre Company that taps into the emotions with varied and well-measured levels of intensity. The play’s most charged sections are between Katherine Kupiecki as Jeanne and Nazi officer, Von Pfunz (Wade A. Vaughn).  Jeanne works with the island’s black market, having to do what she has to do to keep her house safe. Von Pfunz has the power to control the relationship. That said, he is truly mad about her and we find that he truly desires to be loved in return. Unfortunately, for his ego at least, she has declared early on that she finds him unattractive. Vaughn and Kupiecki crackle brilliantly.

Lilly’s husband is a British fighter pilot whom she suspects is dead. She clearly projects her desires and romantic yearnings onto Gabriel but is gripped by doubt as to whether he is a Nazi or a Brit. Miriam Schwarz and Ross Destiche bring endearing innocence to these roles.

Eight-year-old Lily Wangerin charms as Estelle. Minnesota’s great Funny Woman, Janet Paone, renown as a Church Basement Lady,  shines as the housekeeper named Lake. She plays dramatic levels that will surely impress her vast fan base. However, she gets lots of legitimate laughs too.