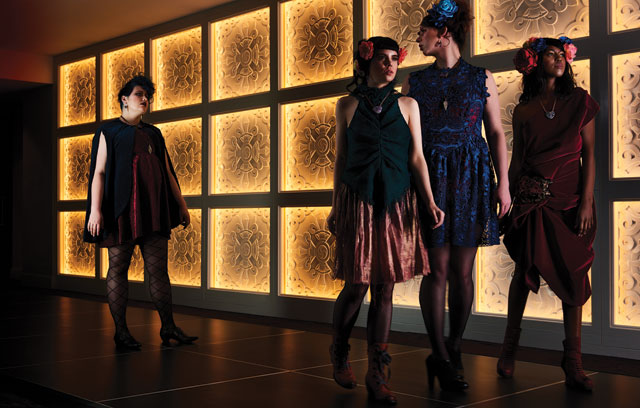 Samantha Rei, born in Boulder, Colorado and raised in Hastings, Minnesota, has brought big names like Huffington Post, Glamour UK, Vogue UK, and Project Runway to the fashion scene of Minneapolis. Having been designing for over 17 years, Rei currently resides in North Minneapolis where she brings her childhood dream of fashion to life. 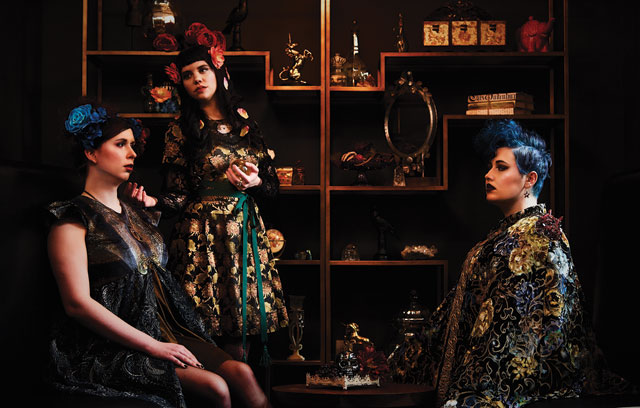 “I’ve been an artist as long as I can remember, and I was raised by a mom who has sewed for her whole life. When I was in middle school, I discovered fashion and I just ran with it. I started my first label in 2000, designing Lolita clothing,” Rei says. 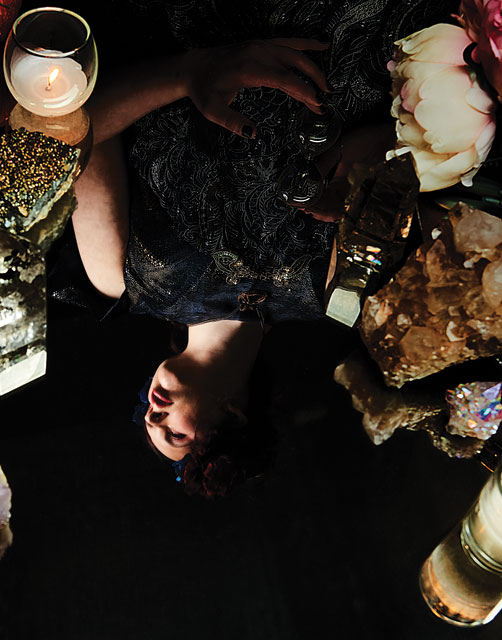 Rei moved her base of operations to a studio in Northeast Minneapolis from North Loop after filming Project Runway last fall. She’s planning her grand opening in late spring, which will surely be as grand and whimsical as her designs. 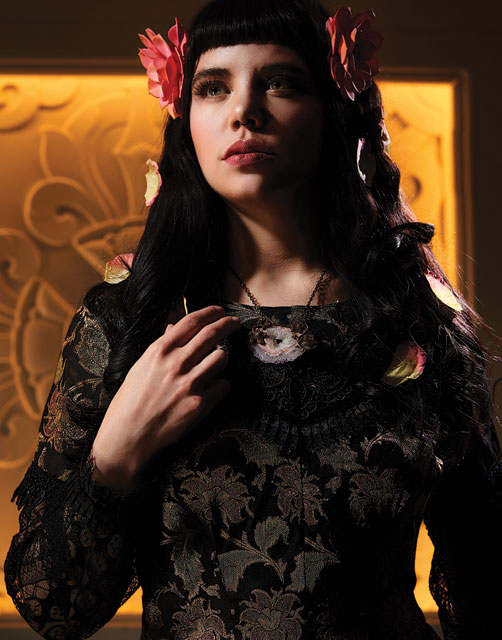 “I would describe my fashion as a little bit Kate Spade, a little bit Vivienne Westwood. Fun and quirky, cute and punky,” she says. “A little bit rebellious and a whole lot whimsical.” 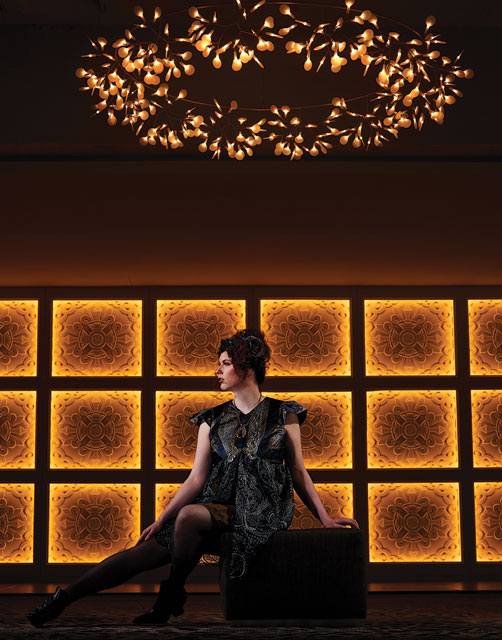 Rei’s designs are inspired by several of her favorite designers including Hirooka Naoto, John Galliano, and—her personal favorite—Alexander McQueen. Although her unique fashion has been recognized nationally and internationally, she’s still a Minneapolis favorite, too. In 2014, Rei was selected as one of City Pages‘ “Artists of the Year,” and in 2016, she won Best of the Twin Cities “Best Fashion Show” and Reader’s Choice “Best Local Fashion Designer.” 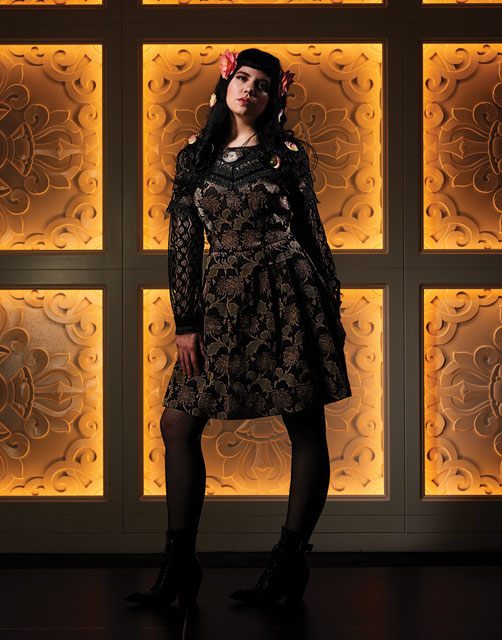 Although Rei’s designs are typically centered around dresses, menswear, and accessories, she says that several brides come to her for wedding apparel, too. 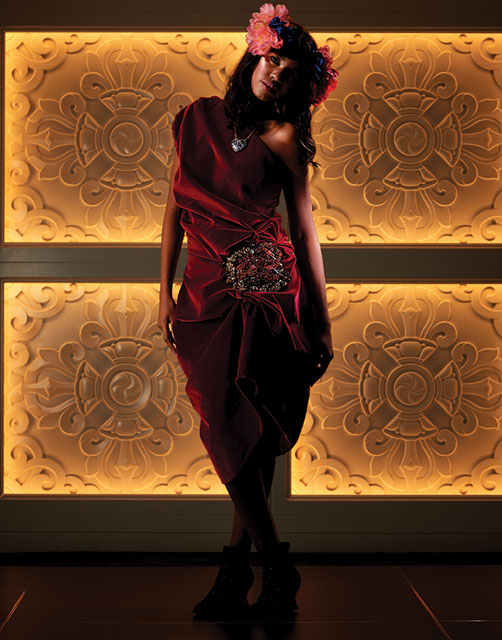 “Quirky brides come to me. I’m known for being able to create things for unconventional weddings. I’ve only made two white wedding dresses, and they were still unconventional! I’ve just streamlined my consultation appointment website as well. Check out the Limited Engagement section of samantharei.com for more info!” 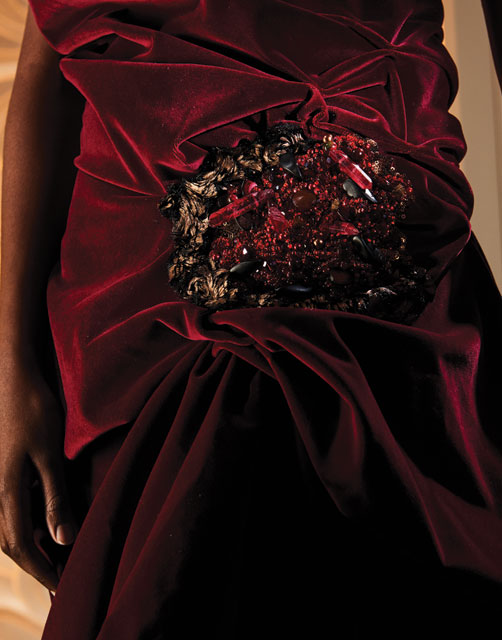 After competing on Lifetime’s Project Runway Season 16, Rei is reentering the Minneapolis fashion scene with a bang. She recently dropped her new Vanitas line, which is already turning heads. The line carries the same whimsical Rei charm as her usual designs, but Rei says it exudes a new level of beauty and class. Featuring darker hues, big, chunky accessories, and thick velvety materials, the Vanitas line is taking Rei’s fashion somewhere it’s never gone before. Rei says the line is perfect for the unconventional bride. 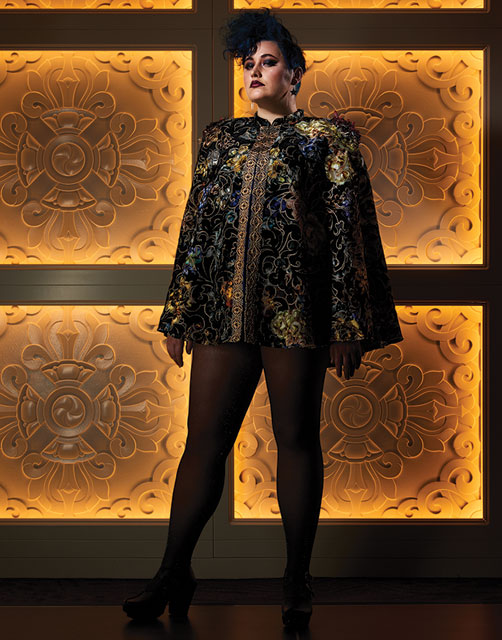 “A lot of my brides love dark and decadent things. And almost all of my wedding clients want to be able to use their garment again. This is the kind of collection that can be used for someone’s big day and then worn again for other big events,” she says. 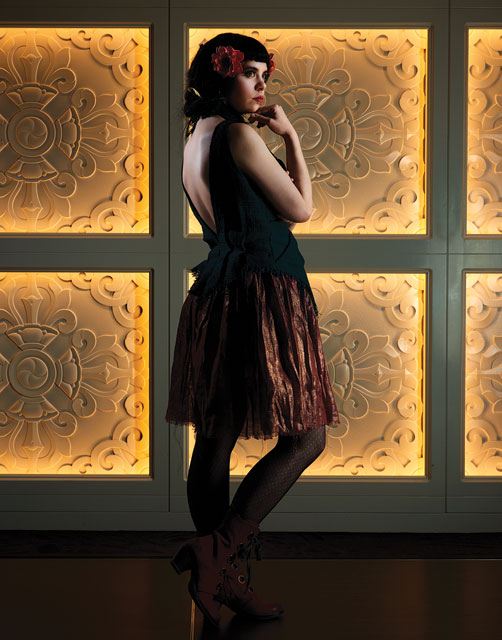 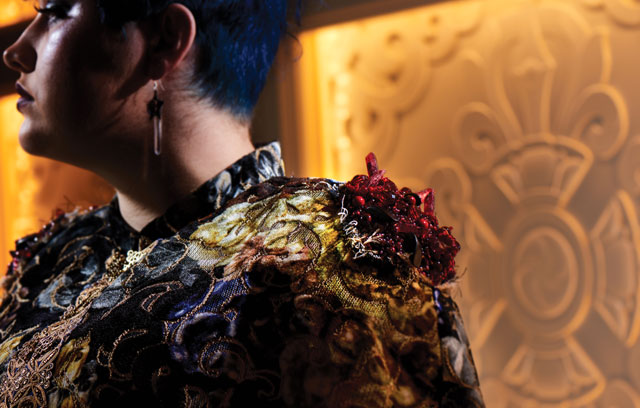 “I chose Ivy and Claire for this set because they are such a cute couple. I’ve known Ivy for several years and she’s such a sweet, beautiful person, and I’ve gotten to know Claire through her, and you can tell they just have so much love between them. I’m happy Ivy found Claire, too. They’ve been so good for her. They are funny and their smile is infectious,” Rei says. 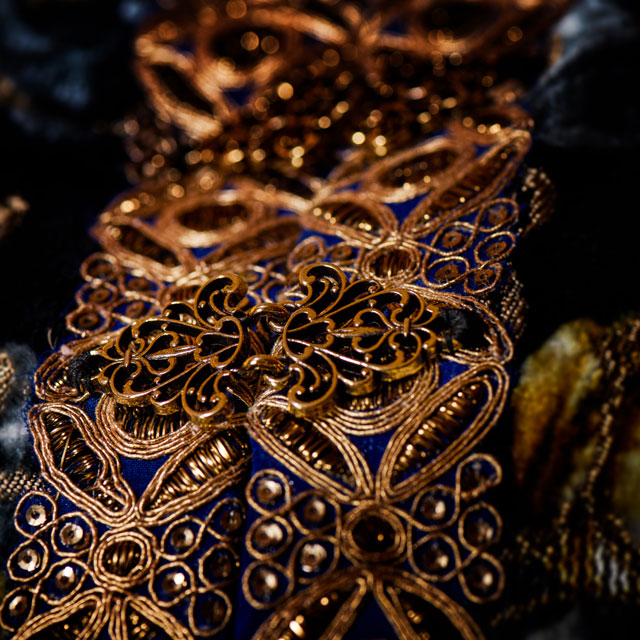 Though this was Thomas’ first time modeling and Fae’s second, the couple brought a natural sense of love to the Vanitas line, which Rei is hopeful will draw brides to the quirky, unique designs. 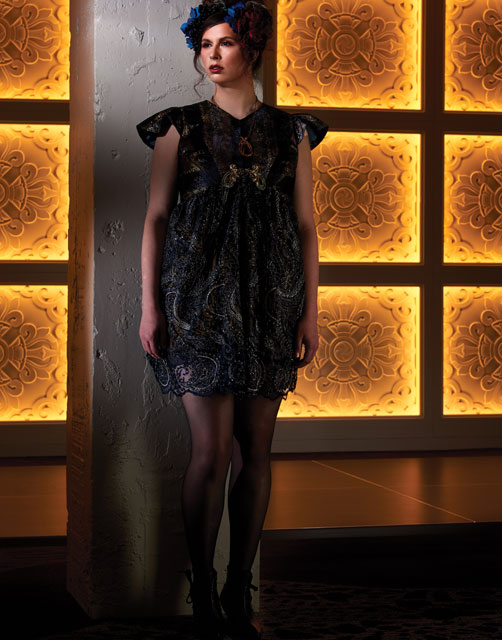 “It was a lot of fun working with Ivy and Claire on this because it was just so easy. Once they were dressed up, you could tell they were having fun with each other. They didn’t need much direction, and they really just took the concept and ran with it,” she says. 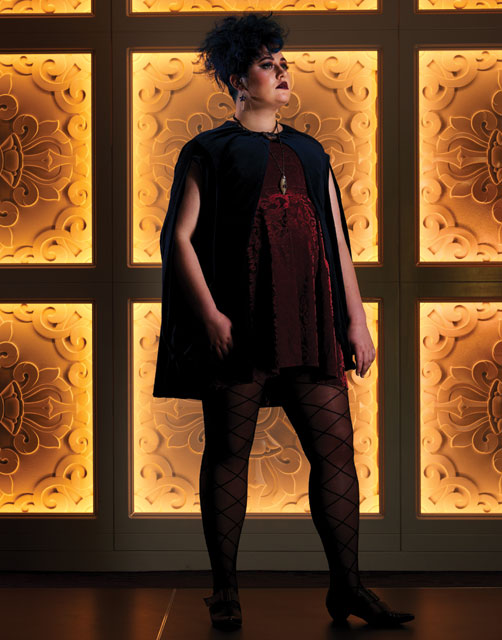 Fae says her long friendship with Rei and past modeling for her landed her the gig as a model for Rei’s Vanitas line. 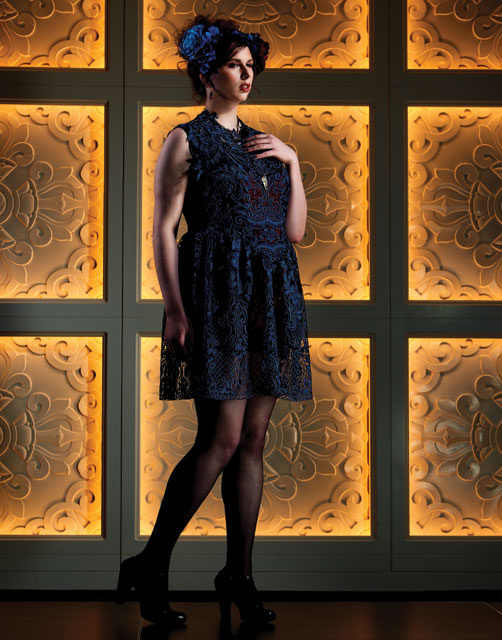 “Samantha and I became friends somewhere around nine years ago through mutual friends. I think the first time I met her was at a Lolita gathering at the lantern festival at Como. (Samantha) asked if I would like to model for Helena,” she says. “I had never done it before, so I was super excited but also pretty terrified. I was surrounded by experienced models, there was an actual runway, cameras, and Novala Takemoto was playing solo shred metal on the staircase. It was surreal.” 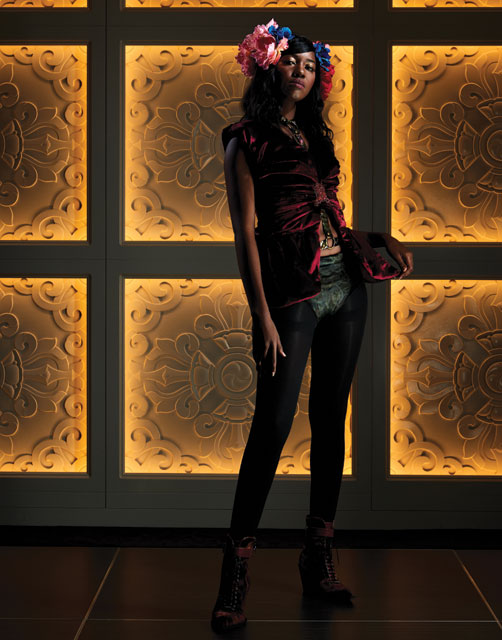 Fae says she came out as a lesbian shortly before she began her modeling career, so she was hesitant to put herself in the spotlight until Rei gave her the motivation she needed. 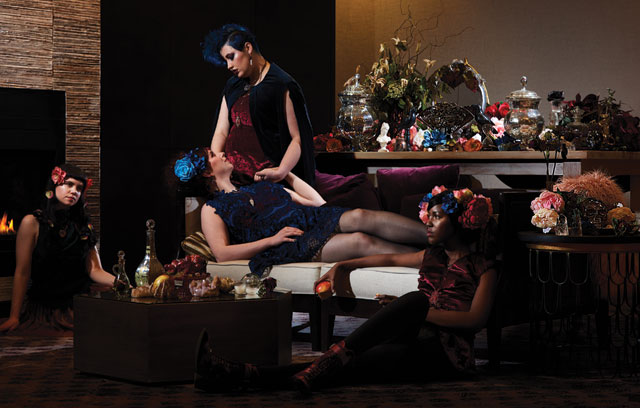 “Samantha was very reassuring and her kindness really saved the day. Right then, the (video game) Katamari Damacy theme song started playing for the final walk through. I was barely being able to stop myself from laughing on the catwalk,” Fae says.

Thomas says their first-time experience with modeling was fun because of their ability to blend both modeling and the dynamics of their relationship with Fae together. Also, Thomas says Rei played an integral role in warming them up to the stage.

“It was amazing! She made sure we were comfortable as disabled, amateur models. It was like hanging out with a friend. It meant a lot to me that she made sure that the designs and styling were true to me as a non-binary person,” Thomas says.

Rei says she lives—and designs—with the belief that everyone is beautiful in their own individual way, and she wants her designs to allow people to embrace this beauty.

“Everyone deserves to feel beautiful. My clothing shouldn’t make someone feel more beautiful, it should magnify the beauty they already have within. My goal is to help everyone tell their own story,” she says.