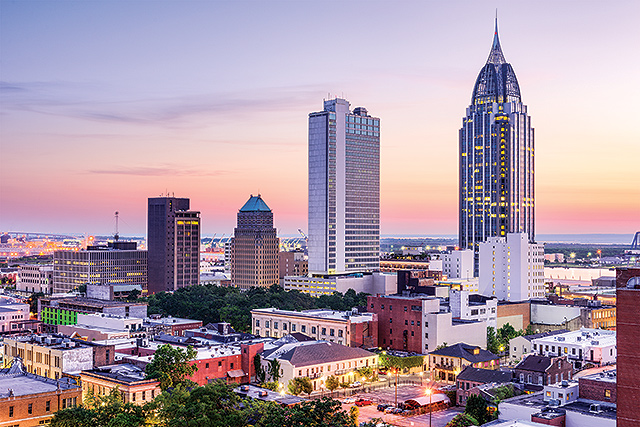 Welcome to the home of Mardi Gras, held in Louisiana’s capitol city. No, not that town. Borders and rulers have changed, and Mobile now belongs to Alabama. Founded by French settlers in 1702, a year later its rowdier inhabitants launched the land’s first Mardi Gras, well ahead of New Orleans.

Mobile resembles That Other City in its romantic architecture, with wrought-iron balconies shading sidewalks; gracious antebellum mansions; parks with live oaks draping veils of Spanish moss, throw-beads swaying in their branches; the 1835 cathedral glimmering with stained glass; and cafes selling sugar-kissed beignets — all symbols of a genteel deep-South past. But Mobile extends a hometown welcome that’s warmer than That Other City, minus the raucous drunks. It’s a city on the move.

But that’s recent. Once-boarded shops now sport art galleries, boutiques, and restaurants showcasing New Southern food. Its three hotels have grown to seven. The dormant Saenger Theatre, a former vaudeville palace of 1927, has been reborn to house productions from the Mobile Symphony Orchestra to Bob Dylan. The Steeple, erected as a Methodist church in 1895, has been gorgeously reclaimed by the same foresighted developer to host concerts and is open to admire — its stained glass by a Tiffany protege is sparkling once again, and musty asbestos tile has been removed to reveal a floor of first-growth pine.

Tourists aplenty streamed by on the Interstates but never had a reason to pull over and explore the city. Scott Tindle, another developer, launched (literally) Gulf Coast Duck Boat tours to change all that. Bumping into the muscular working port of Mobile Bay, where the delta’s five rivers converge (“the Amazon of America”), the tours capture the energy of port-side shipbuilding and airbus plants while splashing by container barges and cruise ships and the vintage fleet anchored here, including the U.S.S. Alabama and U.S.S. Drum submarine.

Again inventing opportunities, the same developer has undertaken major renovations to the dormant Colonial Fort of Mobile, furnishing it with artifacts on loan from the History Museum, to spotlight the Colonial experience under the city’s five landlords: first France, then Spain, next England, the Confederacy, and again the U.S.A. Costumed reenactors and activities such as glass-blowing, a shooting gallery (Get those pirates!), and fife-and-drum corps marches enhance the fort’s edu-tainment ops. 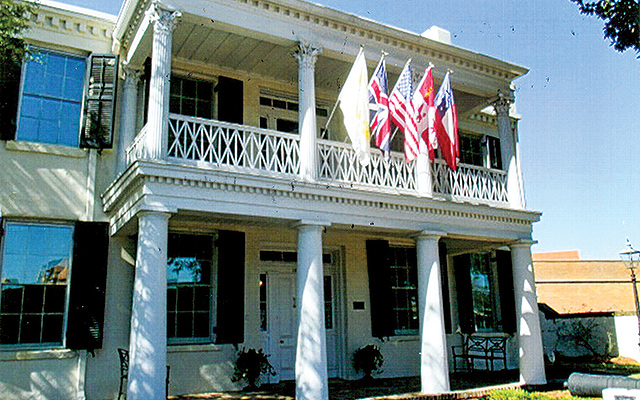 That neighboring History Museum, housed in the City Hall of 1855, is particularly proud of its display of miniature houses of grander days, along with antique carriages and items from the U.S.S. Alabama. It’s steps away from GulfQuest, the National Maritime Museum of the Gulf Coast, launched in 2015 with energetic interactive stations allowing visitors to experience the wind force of a hurricane; navigate a ship (Whoops! Collision!); chart one’s way by stars; and plot a citywide evacuation (You fail? Then so does Mobile). Chronically bored teenagers jostled for places at each action station.

But back to the Big Deal…almost the first words you’ll hear as you exit the plane is someone making sure you get it straight: Mardi Gras started here. Evidence — and a whole lot more — is on display in the Mobile Carnival Museum, knitting the story of past and present celebrations, which today boast 38 parades, put on by 80-plus mystic societies (two of which are gay — the Orders of Osiris and Pan — famous for hosting the best of all balls). Tour this house of bling to gawk at over-the-top royal outfits, then climb aboard a float for a selfie.

Dauphin, downtown’s main street, is jeweled by scads of indie galleries hosting everything from glam glassworks to decorated skateboards. Artists flock here “because the city is affordable, and their art is affordable, too, not like New Orleans,” declares an artist at Artology. At Mobile Arts Council, I hear the same sweet story: “It’s a quirky place, so lots of really good artists are moving here, and they’re welcomed. Mobile is not stuffy.”

Anchoring a suburban park, Mobile Museum of Art showcases Alabama’s talent pool in an exhibition of contemporary photography, along with a tribute to photographer Christenberry, the state’s most renowned, and beloved, son. Another exhibit salutes American Art from 1945 to the present, with works by bold names such as Louise Nevelson, Robert Rauschenberg, and Jim Dine. 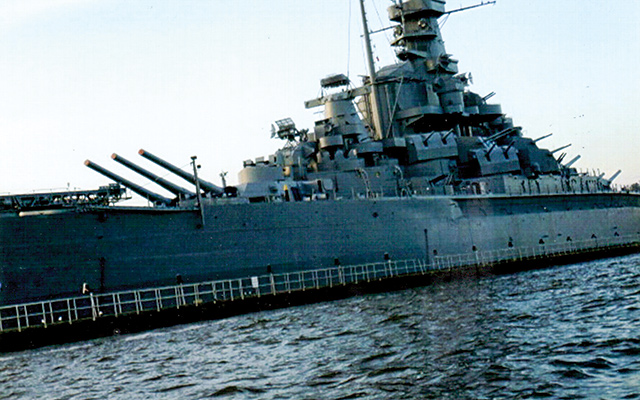 Speaking of dine: ready to eat? Seafood from the gulf dominates Mobile’s kitchens, ranging from dives to deluxe. Start at the top (literally, atop a glassy tower) at Dauphin’s, promoting farm-to-table long before it was trendy (small-batch bacon, local cheeses, hand-crafted sauces, Gulf seafood) in winning dishes like pork belly with cheddar grits; venison carpaccio; green gumbo; and, of course, oysters, followed by shrimp étouffée, shrimp and grits pumped up with local Conechu sausage, and pecan-crusted fillets.

More oysters? Wintzell’s has been the go-to place ever since 1938. We slurped them up raw and naked plus baked in classy Rockefeller and Bienville treatments. Continue, if you can, with bacon-wrapped shrimp or scallops, redfish, stuffed flounder, and my choice, crab cakes with remoulade and a side of grits. Yes!

Bluegill, a couple of miles farther along the river, brings on the oysters, too — raw or buttery, cheesy, and flaming. What next? Voodoo shrimp. Fried green tomatoes. Seafood po’ boys. Or combos of all of the above.

Back on Dauphin, Noble South is a cozy bistro that swears by farm-to-table, too. Don’t miss the soft shell crab BLT. The deviled eggs with bacon and roe. Chicken livers joined by kale, poached egg, and bacon vinaigrette. Rabbit and dumplings, with housemade pork/rabbit andouille sausage. Shrimp and grits (a daily requirement if you know what’s good for you). Desserts like banana pudding pot de crème and buttermilk pie. 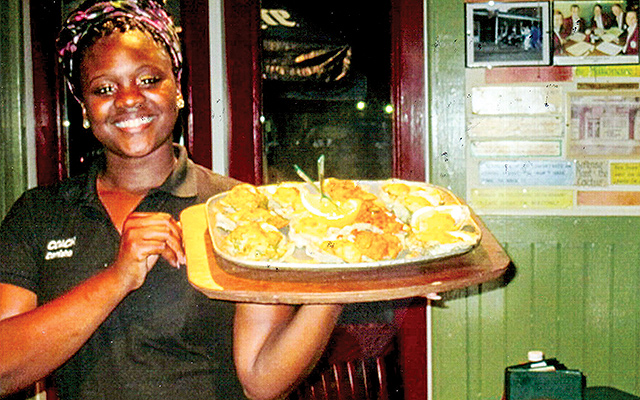 Breakfast? Think beignets, upgraded with a spritz of lemon at Panini Pete’s, where sandwiches are also built upon those tasty doughnuts. Or Serda’s, serving house-roasted coffee and soon to open downtown’s first craft brewery. And don’t forget to score a Moon Pie. This decadent sweet is composed of a marshmallow and graham crumb filling in your choice of coating: chocolate, banana, or salted caramel. And if you’re in town on New Year’s Eve, get on board for the Moon Pie Drop. Be there or be sorry. And stop in at B-Bob’s, the city’s premier gay bar (drag shows, too). Visit www.mobile.org to find your way.

SIDEBAR: A Day in the Delta

I know, I know: you need the beach. Those famous white-sand vistas lie only 30 minutes from town. Steer across the causeway to Dauphin Island and help yourself.

There’s a whole lot more to do on the island, too. Trek the boardwalk of Audubon Bird Sanctuary through swamps and dunes to the shoreline, spying on the thousands of species which fly through on their annual migrations.

Visit Fort Gaines, planned to defend the bay and completed in 1861, when along came the Civil War. By 1864, Mobile was one of the last ports open to blockade runners bringing supplies to the Confederacy. So in August of 1864 Union Admiral David Farragut assembled a fleet to attempt to capture the fort guarding the bay. The battle, a long and bloody one, demanded extreme measures on the Union’s part: “Damn the torpedoes, full steam ahead!” the Admiral famously ordered, and the fort surrendered. Today a soldier’s life is reenacted for visitors, who can watch a blacksmith at his forge, a baker, and the firing of an original cannon.

En route, visit Bellingrath Gardens and Home, a sumptuous estate that began life as a riverside fishing camp for a fellow who earned his fortune as a Coca Cola distributor. When his secretary married the boss, he built the mansion for the new wife, a gardener who took over and planted acres of azaleas, camellias and more. Stroll its paths, then marvel at the mansion’s ooh-la-la antiques.

Five Rivers, Alabama’s Delta Resource Center, offers DIY ops for hiking and canoeing, or jump aboard a pontoon tour to spot gators, herons, and pelicans in the swamp.