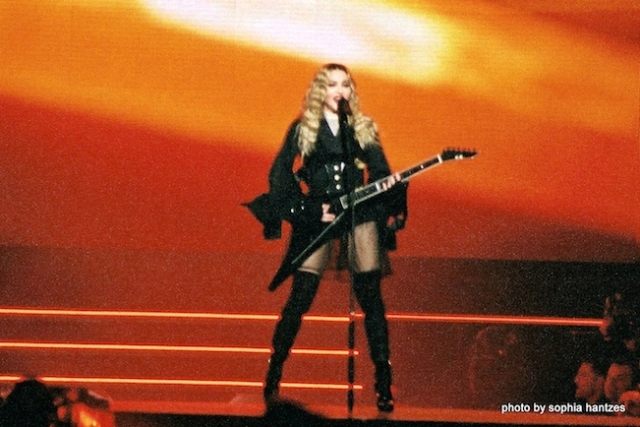 Madonna in St. Paul during the October 8th performance of her Rebel Heart Tour. Photo by Sophia Hantzes

Madonna in St. Paul during the October 8 performance of her Rebel Heart Tour.
Photo by Sophia Hantzes

Throughout Madonna’s roughly 130-minute set, she felt the need to keep reiterating that she is “The Queen.” But why? Was that to compensate for something?

At one point, she admitted to waking up on the morning of her October 8 St. Paul appearance with a fever, which could partially explain how lethargic and hoarse she seemed to be. But, as a couple people sitting around me iterated, maybe it was all a ruse to conveniently burst into an acapella version of “Fever,” which she performed beautifully, considering having just admitted to being ill. Yes, Madonna can be in the moment and sing elegantly live (though she was lip syncing during dance numbers).

But if we are to forgive her for her lackluster energy, she was certainly quick to call out the audience for not having enough enthusiasm. “Did the cat get your tongue, St. Paul?” she asked a half-hour into the show. “Or have you had too many beers?”

The street goes both ways, Madge.

But that aside, she is certainly an icon for a reason: the woman knows how to put on a show. Performing unexpected medleys of old favorites mixed with new tunes from her 2015 Rebel Heart album (notably, a “Holy Water” and “Vogue” mashup that involved dancers dressed as nuns pole-dancing with Madonna), the singer proved that her old standbys are just as thrilling today as they were upon initial release — and she’s still not afraid of pushing boundaries.

Redefinition of religious symbolism was rampant throughout the first chunk of her performance. However, with each video interlude (aka costume change), the show would switch gears, without much semblance of coherence in terms of theme other than, simply, Madonna. Any other songstress would have earned mixed reviews for this, but Madonna pulled it off beautifully since, as she has proven throughout her 30-some-year career, Madonna can change faster than a chameleon. 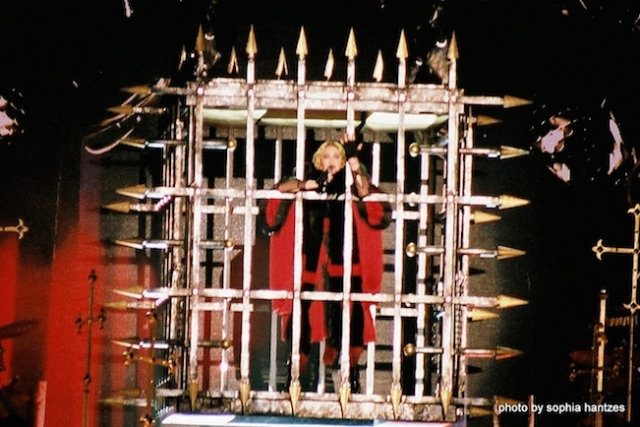 Madonna in St. Paul during the October 8 performance of her Rebel Heart Tour.
Photo by Sophia Hantzes

Following the religious opening to her Rebel Heart Tour, Madonna switched gears into a more low-key sit-down portion of songs before again changing costumes and gears into a Spanish matadorian-inspired medley of songs. She closed the show with a 1920s-inspired French flapper girl feel (which worked well for a “Material Girl” number that the audience was craving) before returning draped in an American flag for her “Holiday” encore.

Yes, Madonna certainly knows how to put on a show and keep the audience guessing. Where her vocals may have faltered a bit (Due to a fever? I believe her even if those around me didn’t.) she made up for it in showmanship. From the minute the lights went down until she sang her last notes just before midnight, Madonna kept the audience guessing and on the edge of their seats.

Although the audience was obviously begging for her gems from the ’80s and ’90s, the songstress certainly doesn’t want to be considered an oldies act still touring. Yes, she performed her old standbys, but reimagined them and mixed them in with nine tracks from her new album.

And to accompany the new songs came new looks. First Asian costumes (think Samurai warriors, fans, and kimonos), then Spanish outfits (matadors, ruffles, and maracas as far as the eye can see). Once again, America is treated to a pop star appropriating other cultures, but Madonna managed to pull it off in one of the least-offensive displays in recent memory. If it must be done, at least Madonna did so tastefully.

She even gave a nod to her large gay following as, during one video montage/costume change, her dancers performed a sexually provocative routine atop beds. Four couples and one of them consisted of two male. The Material Girl loves us just as much as we love her, and she’s unashamed to show it unlike so many other singers in the game today.

During her set, despite her being ill, there still wasn’t a dull moment. And even with a fever and slightly hoarse voice, she still managed to soar into her higher register. So is she compensating when she tells us she’s “The Queen?” No. She’s just putting the other wannabe divas in their place.