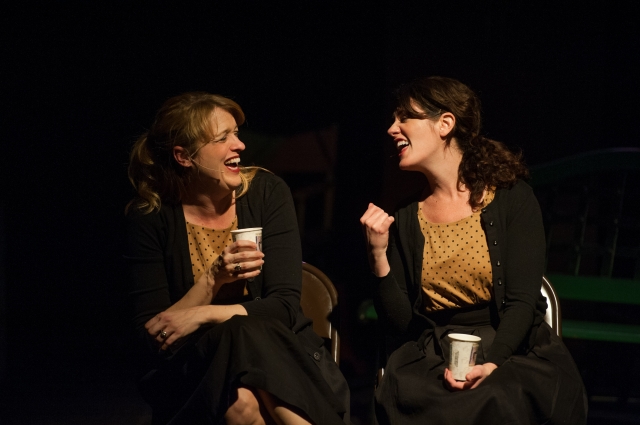 Two Sugars, Room for Cream is a prime example of the importance of arts institutions for developing promising new work. After the two-woman show created and performed by Carolyn Pool and Shanan Custer became a comedy smash hit at the 2009 Minnesota Fringe Festival, it was expanded the following year at Illusion Theater’s well-regarded play development Fresh Ink Series. For the current run at the New Century Theatre, directed by Peter Moore, some scenes were cut and some short ones were added.

Custer and Pool come from different performance backgrounds. Custer, a veteran of the esteemed Brave New Workshop Comedy Theater, has been a star on the local comedy scene for years. She was also terrific in Dudley: Rigged For Laughter at History Theatre a few years ago. That show paid tribute to Brave New Workshop founder, Dudley Riggs.

Pool is known for her marvelous serio-comic performances from straight plays in productions of Born Yesterday, The Sisters Rosensweig, and August: Osage County at Park Square, not to mention a fine dramatic turn in Three Days of Rain.

Custer says, “The assumption might be that I wrote the funny stuff, and that isn’t how it worked out at all! Carolyn is damn funny. And I guess you could say that I’ve always approached my writing—comedic or otherwise—with a certain amount of intensity and truth. I like writing relationships, and it’s refreshing for me to write scenes that breathe a bit and can end with a discovery, and not necessarily with a ‘button’ or black-out line. I think Two Sugars, Room for Cream has a good blending of our voices.”

Custer adds, “New work has to grow. We’re so grateful to the theaters and producers that have allowed us to try new stuff in front of audiences.”