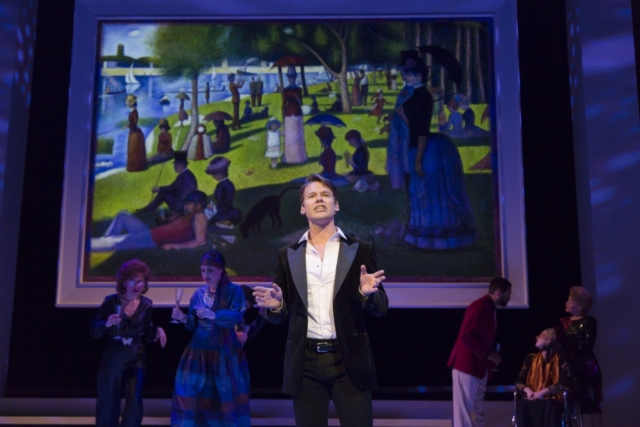 Two musicals that probe into the invisible realm of spirituality have been splendidly staged locally: Sunday in the Park with George at the Guthrie Theater and Fly By Night at the Jungle Theater. Both pieces differ greatly yet they both tap into the metaphysical as a way to uplift and transcend the limits of the everyday world we see and attune to.

The first half of Sunday in the Park with George imagines painter Georges Seurat as he draws inspiration from fellow Parisians for his 1885 oil on canvas masterpiece, A Sunday Afternoon on an Island of Le Grande Jatte. Randy Harrison, renown for the television series, Queer as Folk, and his stage turns in the national tour of Cabaret, the Broadway production of Wicked, and the Guthrie’s The Glass Menagerie, delivers a fine performance as Seurat. We see a man more committed to his art than to the woman he loves, and who loves him. That woman, Dot, is played with wit and sung marvelously by Erin Mackey, who also wowed audiences in last year’s Guthrie revival of South Pacific.

In the second half, fast-forward a century: Harrison plays George and Dot’s great grandson, also named George, and Mackey plays Marie, his 98-year-old grandmother. The occasion is the unveiling of 1980s George’s high tech work of art titled Chromolume #7. Composer-lyricist Stephen Sondheim and book writer James Lapine seem to be taking a jab at the invasion of technology into the making of art. The ’80s was a time when the term “State of the Art” came into common usage and it is mentioned in this musical at times. It was also a time when such high tech art become more central to American society. 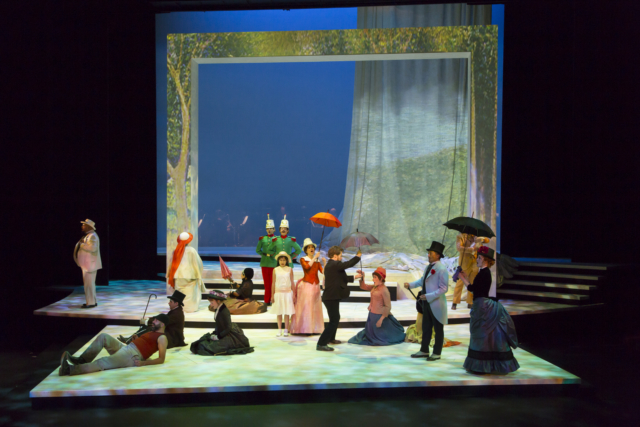 Sunday in the Park with George. Photo by T Charles Erickson

Director Joe Haj’s actors cut vivid figures as 19th century Parisians and New York art snobs. The same can be said of director Michelle Rasmussen’s actors in Fly By Night at the Jungle. The actors play New York denizens in the mid-1960s when the Big Apple endured a major power black out. Where Sunday in the Park with George reveals uncanny insights about four different people in two centuries, musing notions of a continuous family spirit force beyond the grave and into the family’s future, Fly By Night is filled with chance and twists of fate that seem to be deigned by some unseen force beyond the corporeal. 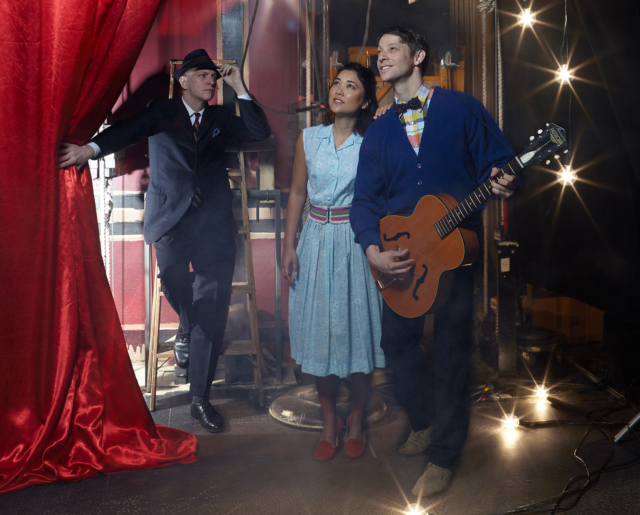 This transcendent production shimmers with endearing performances. Chris Koza leads the cast as a sandwich maker whose life is turned upside down by Daphne and Miriam, two sisters from North Dakota. Koza, Royer Brockus, and Leah Anderson deliver vocals that charm, enchant, and at points, even beguile.

Jim Lichtscheidl is terrific as a narrator who at points is a spoof on mysticism itself. Jim Detmar gives a touching performance as a man stuck in grief over his dead wife. Joy Dolo and Joshua James Campbell add excellent support. Fly By Night was originally created by Kim Rosenstock, Will Connolly and Michael Mitnick.