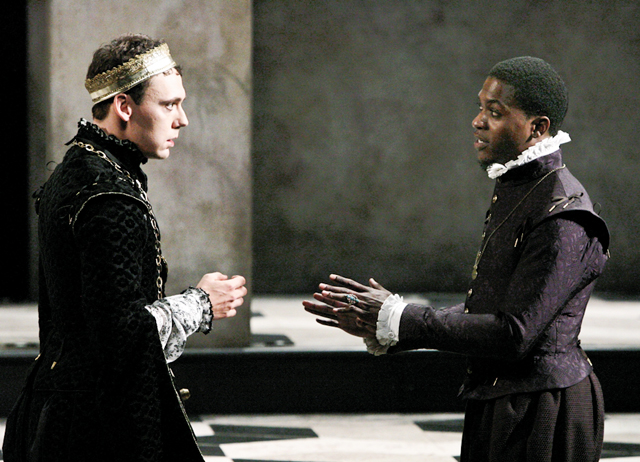 The Guthrie Theater and The Acting Company are co-presenting William Shakespeare’s Hamlet and a dark comedy about two of its minor characters written by Tom Stoppard in 1966, Rosencrantz and Guildenstern are Dead. Same actors, same set, and apparently same costumes for both productions so they complement each other beautifully. Prince Hamlet is a youth who lives with the maddening knowledge that his uncle killed his father and has now usurped the throne and taken his wife, Hamlet’s mother, as his queen and hence, to bed. How does he deal with his titanic rage? In John Skelley’s performance he keeps that painfully understandable rage just beneath the surface so that he can sniff out a way to prove his Uncle Claudius’s crime. Though some may want Skelley to relish the language more, he mines the anguish of the young man in an understated and passionate performance. John Rando has crisply directed the show so it clips along while still making us care deeply about the protagonist’s horrific dilemma.

Both plays are set in the Middle Ages, which the designers have handsomely evoked. It was a time when going against the Crown would have you quickly and brutally executed. That’s the tension that Rosencrantz and Guildenstern live under after they’ve been sent for by Claudius to sniff out his intentions on the usurping King’s behalf. But the degree to which they intuit the danger of their predicament is something you may want to think about as you watch the productions. Ian Gould and Grant Fletcher Prewitt winningly play these minor Hamlet figures as the lead characters in Stoppard’s play. In both plays Hamlet detects that they are there to spy on him immediately so its clear that both young men are torn between friendship and kingly allegiance. In Stoppard’s play we see Rosencrantz and Guildenstern’s possible side of things not written by Shakespeare. Director Ian Belknap keeps the show’s tragicomic timing sharp and sure. This makes its ending all the more chilling.

Hamlet and Rosencrantz and Guildenstern Are Dead
in alternating performances
Through May 4
Guthrie Theater, 818 So. 2nd St., Mpls.
(612) 377-2224
www.guthrietheater.org