Two McDonagh Plays on Local Stages Reveal A Playwright of Range and In One Case, Substance 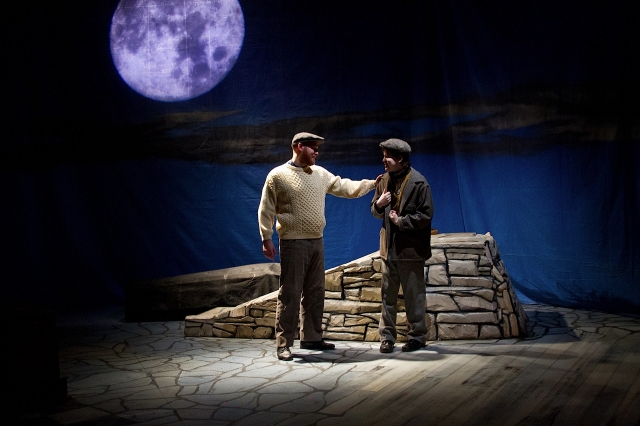 The Cripple of Inishmaan at Nimbus

Martin McDonagh is British but draws from his family’s Irish background so much that he is largely considered to be an Irish playwright. When it comes to rustic Ireland his ear and his emotional apprehension of common folk astounds. That gift is richly realized in a numinous production of his 1996 masterwork, The Cripple of Inishmaan, at Nimbus Theatre. Director Kari Hammer’s brilliant cast embodies the maliciously petty nature of small town folks who habitually, hence unthinkingly, heap bigoted insults on protagonist Billy, whose birth defect, a disabled hand and arm, are the stuff of local derision rather than compassion. It’s a striking reminder that people in isolated areas, often sentimentally known for their ‘goodness’ and ‘wholesomeness’, are not always necessarily that. (Look here throughout America at some of our election results.)

Andrew Newman gives a touching performance as teenaged Billy. Adam Scarpello who gave marvelous stage performances earlier this year in Care Enough with Savage Umbrella and Killer Joe with Candid Theater merits another blue ribbon as Babbybobby, a local workingman whose kindness turns to senseless meanness. Karen Helfand Bix and Jan Hammill are gritty examples of matronliness gone toxic. Katie Adducci is enraging as a sadistic tormentor of Billy who uses sexuality and shame to manipulate the credulous males around her. Jean Shore as a drunken senior citizen and Mark Groberski as the town gossip, mine grim truths in a mother/son relationship filled far more with hate than with love. The pair is wrenching to watch and brutally honest.

Every member of the stellar cast makes us viscerally conscious of the way disabled people are sometimes systematically maltreated and discriminated against. Indeed, McDonagh’s dark comedy is a breakthrough in plays about the civil rights of the disabled but it never comes off as preachy or didactic. It’s revealed through the organic actions of the characters.

Moreover, Hammer shows that she is a young director to be reckoned with. She interprets the script on its terms while mining the depths and the dark wit with searing intelligence while capturing the essence of parochial Ireland in the 1930s. Priscilla Hagen’s dialect coaching adds to the success, as well as Liz Neerland’s evocative lighting, Andrea Goss’s costumes, and Ursula K. Bowden’s vividly detailed set design. 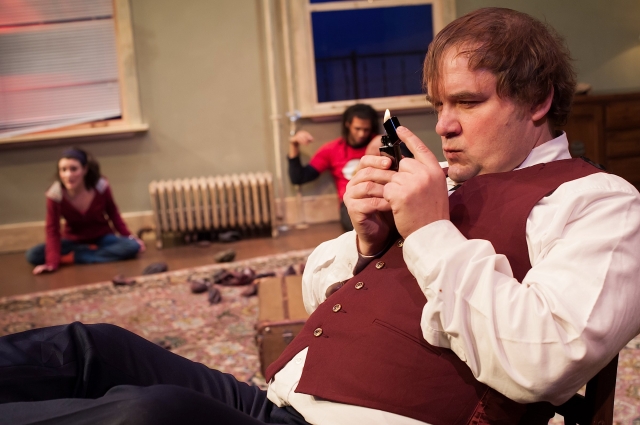 ‘A Behanding in Spokane’ at Gremlin

At Gremlin Theatre, McDonagh’s foray into American life, A Behanding in Spokane, is entertainingly presented by a fine cast but it shows the playwright’s severe weak spot: he has an ear for a variety of American types: the black drug pusher, his bimbo white girlfriend, and an angry white man, but he fails dismally to get beneath the surface. Too much Tarantino and the stereotypes he and his ilk traffic in and too little substance. It’s like a Comedy Central show that needs revisions.

When a tough named Carmichael’s hand was severed in childhood in a grisly train track crime 27 years previously, he vowed to get it back. So for all that time he’s been searching for it. Hmmm. Now 40 years ago you might call this an effort at theater of the absurd, but in 2012 it’s simply trashy. Now, trashiness, in and of itself, can be a legitimate subject for art. But you have to make an effort to get beneath the stereotypes and McDonagh is more a tourist of struggling working class American society, rather than an excavator. I would reccommend for McDonagh to study closely the film, Boys Don’t Cry, which is a searing example of the underclass he jeers at in Behanding. And of course, the plays of Sam Shepard. 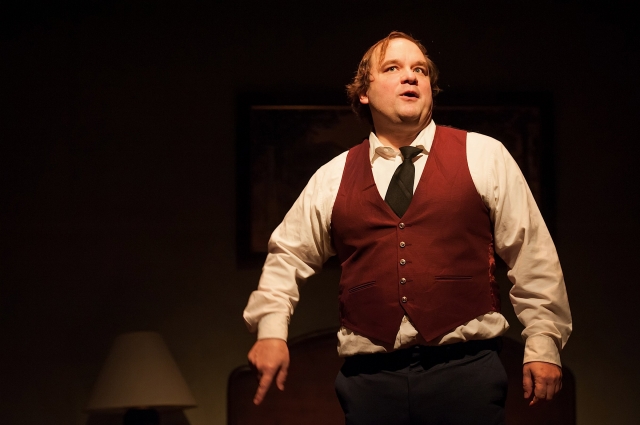 Director Matt Sciple’s engaging cast keeps the pace nice and fast. David Tufford as Carmichael embodies well the bitterness of a man who has lost his hand under sadistic circumstances, but McDonagh actually makes us laugh at his misfortune. Bullying like Carmichael endured as a child should not be the subject of mockery. And that’s the low road McDonagh takes here. I know that many in our post-Tarantino era will find ways to rationalize his insensitivity, but sorry, it’s a sure sign of a great playwright being lazy and cynical. Not to mention, maybe a little contemptuous of ordinary Americans down on their luck?

Brian J. Evans and Sarah Marsh do their best as racist and sexist stereotypes. Luverne Seifert is wickedly funny as an eccentric hotel employee who sees through the delusions of the other three. He’s the best thing in the show.

But I close with another thing I want to make clear: Behanding uses the N-word, the C-word, and sundry antigay slurs. And I have no problem at all with such terms being used in a context that reveals character and situation. None at all. Nor do I have any problem at all if McDonagh thinks we Yanks are too thin-skinned in our reactions to these terms. We sometimes are and by all means, examine that Mr. McDonagh. But always bear in mind: Context Please!