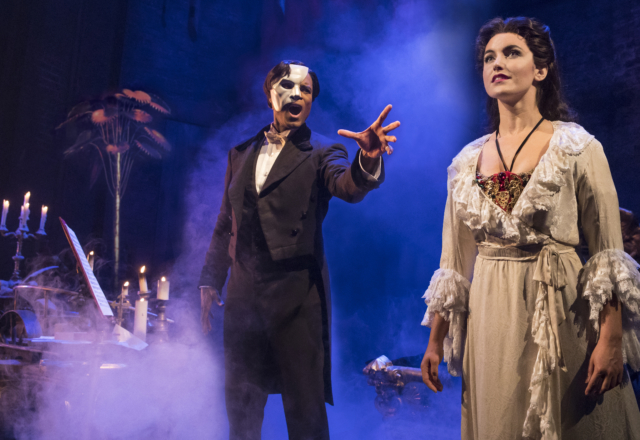 Derrick Davis and Eva Tavares in the Orpheum Theatre production of “The Phantom of the Opera.” Photo by Matthew Murphy.

Cameron Mackintosh’s new production of Andrew Lloyd Webber’s The Phantom of the Opera at the Orpheum is perhaps deeper and richer with emotional power than any previous incarnation of the musical. This owes immensely to the lead performances.

At the heart of the story is protagonist Christine, embodied in a soulful portrayal that could rip your heart out by Eva Tavares. In chilling contrast, Derrick Davis delivers as the Phantom who has essentially made her his possession. Davis penetrates to the pathological core of the character. We witness a man or spirit, if you will, who entrapped a naive young woman by preying upon her conscientious desire to be a great singer. He has no shame.

The triangle is rounded out with a splendidly Apollonian turn by Jordan Craig as heroically romantic Raoul—the young man who loves and aims to rescue Christine from her indentured status. Director Laurence Connor and costume designer Maria Bjornson have collaborated to tailor an exquisitely detailed acting ensemble that captures the gorgeous, yet stifling societal demeanor of the period around the the turn of the last century in France.

Davis alternates with Quentin Oliver Lee in the Phantom role.