Travel: Europe Through a Jewish Lens 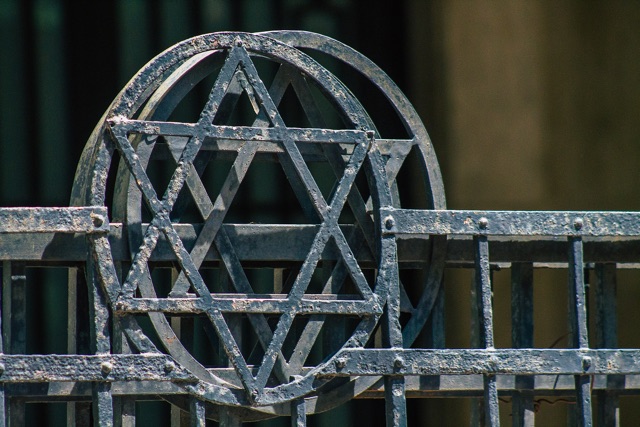 Travel enriches and enlightens, that’s for sure. To make the experience even more rewarding, many visitors abroad choose to concentrate on a focal interest: cooking, hiking, whatever. Over many trips I’ve tried to incorporate a dive into Jewish life and culture as I wander through a historic city. Here are some of the most meaningful stops along the way, whether one is devout or simply fascinated by the history and culture that unfolds.

Delta has reactivated direct flights to Amsterdam, so let’s start our tour in the heart of that fascinating city—since the 17th century, one of the most welcoming on the continent for Jews fleeing harsh treatment elsewhere.

Perhaps the most famous of these immigrants was the Frank family. The house where young Anne wrote her poignant diary is one of the city’s most-visited sites (expect long lines). To clamber through passages to hidden rooms–today left bare—is a moving experience, as is a look out the window onto the street below, festive with tourists—a photograph taken through that very window in the 1940s depicts a Nazi military parade passing by.

No doubt you’ll visit Rembrandt’s house. He wasn’t Jewish, but the neighborhood was, and so were several of his portraits’ subjects. Nearby, the Jewish Historical Museum has been created by joining four 17th-century synagogues—including the Great Synagogue of 1675, an Ashkenazi (German heritage) congregation now showcasing a history of Jewish life at the time. The lovely Portuguese Synagogue of 1675, serving a Sephardic (Spanish heritage) congregation, offers a candle-lit ambience of serenity.

On the pavement rises the statue of the Striking Worker, memorializing a city-wide strike in 1940 against Nazi round-ups. It’s on the self-guided walking-tour map, commemorating sites of Jewish importance, including the Hollandse Schouwburg Theater. Commandeered as a collection point for those about to be deported to the camps, it’s now imbued with new life as the National Holocaust Memorial. The adjoining National Holocaust Museum—once a Jewish school—was another departure point for children held captive in the nursery next door (and frequently smuggled to safety by their Dutch neighbors). The city’s interactive Dutch Resistance Museum dramatically unfolds the stories of everyday citizens of all stripes, who aided Jews and sabotaged the occupying Nazis. Don’t miss it.

Next, cross the channel to Prague, rich with Jewish heritage. When the Nazis rolled through Czechoslovakia, they murdered its Jews and destroyed their communities. But not in Prague’s ghetto. After exterminating its inhabitants, its buildings were left intact, slated to be a “museum of an extinct race,” according to Hitler’s plan. A macabre Disneyland.

This had never been a teeming, crowded ghetto: Lovely Art Nouveau apartment buildings bloom everywhere. Today visitors can tour the quarter’s four historic synagogues from the 1500s (as well as the elaborate Spanish Synagogue of 1868), the Ceremonial Hall, used for burial preparations, and perhaps the most evocative cemetery in the world.

The Maisel Synagogue of 1590 was an ornate emblem of Prague’s (and its Jews’) Golden Age. The Emperor allowed Jews out of the ghetto, and even permitted them to print books in Hebrew—an industry which became Prague’s claim to fame. Today the synagogue has become the Jewish Museum of Prague, with 40,000 precious historic religious objects the Nazis stashed inside it—menorahs, Torahs, Sabbath candlesticks.

Across the street, the Pinkas Synagogue of 1535 serves as a memorial to the country’s murdered Jews, whose names are inscribed on its stark walls, along with the titles of the vile extermination camps. A recording scrolls through each and every name as a cantor’s voice sings the kaddish prayer for the dead. Drawings by children imprisoned at the nearby Terezin camp convey a poignant message. “Here there are no butterflies,” wrote one. “I’d like to go to a place where people didn’t get killed,” another tot inscribed.

Skirting the nearby Klausen Synagogue is Prague’s famous Jewish Cemetery—a tiny, walled enclave of 12,000 tombstones from 1430 onward, packed upright as tightly as a deck of cards. The gilded Spanish Synagogue, a few blocks on and a few hundred years younger, now acts as an exhibit space for historic Torahs amid its ornate Moorish splendor. Outside, a statue of Prague’s noted Jewish philosopher portrays Franz Kafka with a tiny head atop an outsize suit.

On an earlier visit in 2009, I had talked with Leo Pavlat, director of the Jewish Museum, who felt positive about the emerging environment. Under the Nazis and the equally anti-Semitic Communist regime, practicing religion had been forbidden. Today the government lends support to the museum’s educational mission in school classrooms. And at last Prague had procured a rabbi again.

Terezin, the Gestapo’s camp, lies about an hour away (tours from Prague available). Today its victims are buried outside the walls, overseen by a giant Star of David. Inside the fortress, the first thing the eye can spot is the ironic slogan, “Work Makes You Free.” One sight the inmates never were allowed to see, however, was the “model camp” building—shiny mirrors above individual shaving sinks—erected solely to impress Red Cross inspectors. Everything else is chilling, and left unrestored.

Poland’s homegrown anti-Semitism dovetailed with the Nazis’. Yet the entire city of Warsaw was savagely flattened by the Nazis in reprisal for its courageous but doomed Uprising of 1944. Today, the heroic event is re-lived in the Warsaw Uprising Museum, with its reenactment of that amazing 63-day struggle through newsreels, illicit photos, and smuggled diaries. Not only the ghetto’s Jews perished in concentration camps, but countless Christian clergy and countless dissenters.

To learn the story, I joined a free walking tour of Jewish Warsaw (www.freewalkingtour.com), once second only to New York in Jewish residents—400,000 before mass murders; 3,500 today. Our guide led us to the Heroes of the Ghetto sculpture, rising from the site of the Great Synagogue of 1879, blown up by the Nazis. The one remaining synagogue, Nozyk—never damaged but used as a stable during Nazi rule—documents life of the present Jewish community.

Our walk continued to Umschlagplatz, aka Transport Square (next stop: Treblinka camp), passing a sculpted memorial sewer, representing the escape route of a lucky few.  We paused at the site of the famous bridge connecting the “small” and “large” ghettos, where today a multimedia art installation tells the story.

We ended our walk at the engaging Polin Museum of the History of Polish Jews, which interactively recounts 1,000 years of Polish Jewish history, from medieval times when the country welcomed these newcomers to current days. It’s huge and it’s mesmerizing; plan for half a day here. Nearby, a statue pays tribute to a spunky kid named Raymond Liebling, part of the Jewish Resistance. You might know him by his adopted name, Roman Polanski, who recreated these times in his film “The Piano.” And, remember the best-seller (and film) called “The Zookeeper’s Wife”? You can also visit the zoo’s villa, where many Jews were hidden.

In Krakow, three hours by train, another free Jewish walking tour investigates life before and during the war. Several synagogues remain, as does the medieval cemetery crowded with tombstones.

In their midst, the Galicia (region) Museum commemorates in moving photographs, the Jewish synagogues and cemeteries destroyed by the Nazis, and the humiliations, and worse, these people endured. Here, in the heart of the former Jewish Quarter, restaurants circling a greensward tempt visitors with classic Jewish dishes.

Close to the camp-transport site stands the Eagle Pharmacy, run by a Catholic pharmacist who saved many Jewish lives through his underground activity (as accounts from former ghetto residents attest)—supplying everything from fake documents and medicines to hair dye to forestall transports for seniors. On the transport platform, rows of empty chairs serve as a grim memorial. And, across the river, there it is: the now-famous factory of Otto Schindler, another savior, open to tour.

So is Auschwitz, the camp where over a million people were murdered. “Arbeit macht frei”—work makes you free—mocks the gate’s sign. We toured the camp on a drizzly day, aghast at dormitories, brothels, prison cells, medical experimental wards. The gas chambers. The crematorium.

A few years later found me in Bucharest, capitol of Romania—a country just as enthusiastic about Jewish annihilation as Hitler himself. I set out to discover the city’s Jewish District, now a shabby, forgotten neighborhood, which once held half a dozen of the country’s 1,500 synagogues. Three in Bucharest still hold services, including Choral Temple, launched in 1857, destroyed in the 1866 pogrom, rebuilt in 1867, ransacked in the 1941 pogrom, and so the story goes. Nearby, a Holocaust Memorial gives testament to documents which show that no country outside Germany itself was more eager to enact “the final solution” than this one.

Ukraine, too, is rich in Jewish heritage. Jews streaming to Odessa launched businesses along an affluent avenue actually called Jewish Street (where, later, Nazis established not one, but two, Gestapo headquarters to orchestrate the round-up). Out of 66 former synagogues, five remain. A Holocaust memorial commemorates the loss.

In Ukraine’s capital, vivacious Kiev, a tour through its Jewish history commences at a ravine where 150,000 perished in two days. Today the area serves as a memorial park with evocative monuments, including a giant sculpted menorah.

I returned to the town center to explore today’s rising Jewish neighborhood, where three active synagogues welcome visitors. Here, young mothers emerge from the nearby mikvah [bath] and gather in its courtyard to supervise their toddlers’ play. Life, indeed, goes on.

Let’s end our tour in sunny Spain. In Toledo, to be exact— a medieval wonderland of spires and turrets crowded into a tangle of enticing alleys. The city’s Roman ruins peak out everywhere. After them came the Jews, the Moors and the Christians, and many holy buildings contain traces of all three, thanks to centuries of repurposing.

It’s especially evident in the synagogues in the Jewish Quarter, where two of its original eight survive. The 12th-century Synagoga de Santa Maria in Blanca was rechristened when Jews were forced from Spain in 1492. It remains still moving in its simple, white serenity. Nearby, the similarly-simple Synagoga de El Transito of 1391, embellished with Moorish and Gothic motifs, today serves as a museum of precious Sephardic Jewish artifacts. Visitors can explore a restored Jewish house of the 14th century and the mansion of Samuel ha-Levi, which now serves as a museum dedicated to Toledo’s favorite son, the painter El Greco.