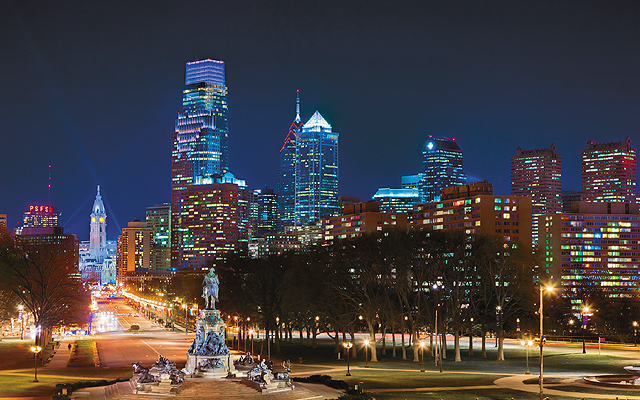 I’m standing spellbound in one of our great national parks, listening to a ranger. No, not Yellowstone; not Glacier, but just as heart-stopping. Instead of the wind in my hair, it’s taxi fumes. Wildlife is limited to folks ambling by with Macy’s bags. I’m at Independence Hall, the epicenter of Philadelphia’s lode of American history called Independence Park. I’m thrilled. I’m proud. I’m humble.

This is a theme park dedicated to our nation’s roots, and Ranger Glenn Pateky is today’s Imagineer. At Carpenters’ Hall he declaims, “You are standing where the first steps were taken toward creating the United States.” Gulp. He guides us through Old City Hall (“Alexander Hamilton argued cases here”) and Independence Hall, “The single most important building. And the most important thing they did here,” he continues, “was not just the signing of the Declaration of Independence. It was the voting.”

We’re in the courtroom, where Ranger Glenn continues, like a TV host: “George Washington sat here in 1775; John Hancock,” he points, “over there. And there, John Adams—the second-most important man”—each with his own inkwell and candlestick.

Nearby looms the Liberty Bell. I overhear visitors’ murmurs in Russian, Chinese, and French as I gape at the symbol of our nation. Across the green lies the newly-unearthed President’s Home, dedicated to telling the story of enslavement and those owned here by Washington himself. Across the street, the new Jewish Museum, in contrast, stands as homage to freedom from European pogroms; the first synagogue arose in 1773.

Just beyond the park stretches a cozy neighborhood of snug brick houses, including the home of Betsy Ross, the outline of Ben Franklin’s abode (now lost), his resting place in the graveyard of Christ Church, and the Quaker Meeting Hall of 1803, which is still active. Elfreth’s Alley claims honors as the nation’s first residential street, still vibrant with 32 bright-shuttered brick homes just steps from more antique edifices, today serving as art galleries, wine bars and designer boutiques. 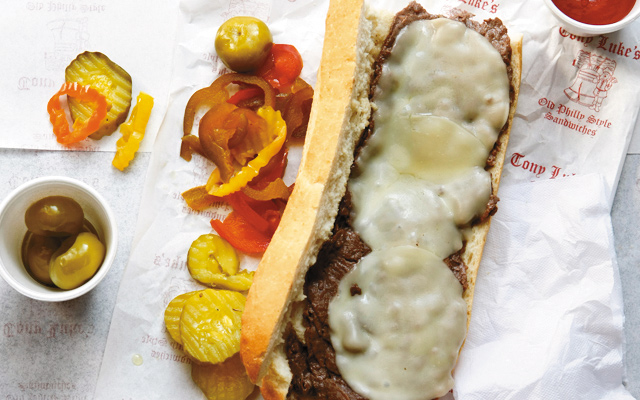 Cheesesteak at Tony Luke. Photo by J. Varney for GPTMC

That’s the near north. Head south in this walkable city—below South Street—and you’re transported from Revolutionary times to the equally tempestuous Little Italy, Rocky’s turf (more on that later). Sidewalk fishmongers and produce peddlers fuse a tantalizing perfume, augmented by cheese shops, bakeries, and cafes such as Villa di Roma, advertising “gravy to go” for your “sangwich.” Speaking of which: The battle continues on who’s got the best Philly cheese steak—Pat’s or (across the street) Geno’s? But no question whose breakfast is primo- it’s Sabrina’s, where the stuffed French toast should be illegal.

On your way back, meander along Pine Street, crammed with shops hosting rare antiques, vintage clothes, and the oldest gay bookstore in the land, Giovanni’s Room. It’s not far from the city’s mega-uber-ultra gayborhood, centered around Ground Zero, the heart of downtown, where it sports a dozen bars, a dozen more cafes, eight style/fitness salons and October’s annual Outfest, with street dances, live entertainment, flea market and contests: penis-shaped bagel eating to a high-heel race. (www.PhillyPride.org).

OK, back to Rocky. Remember that movie moment when he raced up those endless steps? They’re the frontispiece to the Museum of Art, which, along with the Barnes Collection, slated to open in 2012, is home to more Impressionist art than anywhere else in the world. And that’s not counting the Rodin Museum, also on Museum Row.

If you’ve a day or two to spare, hit the road for Valley Forge, the national park where the Continental Army famously wintered in 1777-78. Here, troops from 13 colonies became a united army, living in cabins they hastily built, while George rented an existing home to house his 25 attendants, including Martha—also France’s Lafayette (age 19) and Alexander Hamilton, all of 22. 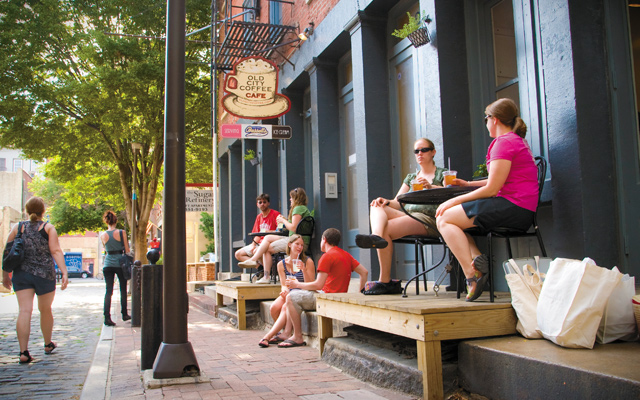 It’s not far from the Brandywine Museum, converted from a riverside mill to showcase the works of the illustrious Wyeth family: painter N.C., his son Andrew, and Andrew’s son Jamie. Their farmhouse is a far cry from the nearby Dupont estate (yes, that Dupont) called Longworth Gardens—200 acres of first-growth trees saved from a lumberyard’s grasp aside lush garden beds the millionaire installed.

The Wharton Esherick Museum—actually the sculptor’s workshop/home of 1913—is an organic dream-house of carved and inlaid wood, a la Frank Lloyd Wright, where the artist hobnobbed with the likes of Theodore Dreiser and Sherwood Anderson. “Useful is beautiful,” he proclaimed, adding, “If it’s not fun, it’s not worth doing.”

Marsha Brown endorses that maxim, too. She turned an old church—stained glass and all—into her eponymous emporium of Creole cooking in New Hope. Lance Shortt, who renovated a farmhouse from the 1700s into the stylish, 10-room Inn at Whitewing Farms, also swears by that credo. Before resting, dine at nearby Dilworthtown Inn, ca.1780, amid candlelight and crackling fires on treats like foie gras and rack of lamb. 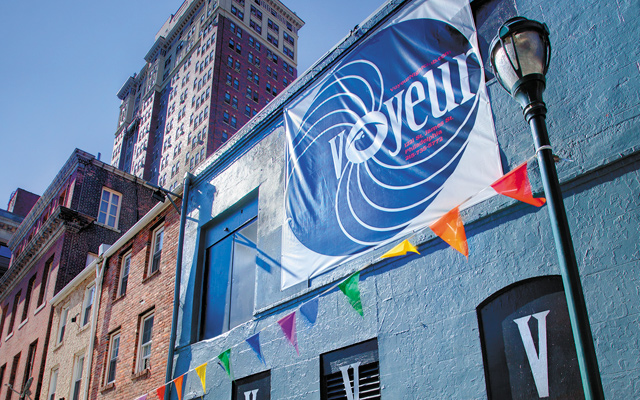 iCandy. Three floors swarming with gay men every night of the week

Knock: New American meets global comfort food in a chic setting in the heart of the hood.

Stir: In the heart of Rittenhouse Square, with lounge style atmosphere.

Tabu: Segue from watching a game in the sports bar to relaxing in the lounge.

Tavern on Camac: Piano bar with a sing-along on the first floor and an intimate cabaret on the second. Ready to dance? DJ Salotta Tee will keep you bumping.

Voyeur: a special events hotspot and after-hours club where the dancing continues well after 2 a.m.

Westbury: The moment you step through the door, heads may turn from the large, oval bar, but they’re smiling at you. Cozy booths invite good group conversation.

Woody’s: You’ll know you’ve arrived in the Gayborhood when you see Woody’s gay flags beckoning. This is classic, Philadelphia, a traditional first stop on any proper first visit to the Gayborhood.

U.S. Mr. Gay Competition
November 18-19, 2011
U.S. Mr. Gay returns to Philadelphia for the second year and welcomes contestants from 20 U.S. cities.  Held at nightlife hotspot’s Woody’s and Voyeur, the culmination of competitions held across the country; the winner will advance to the international. Nightlifegay.com 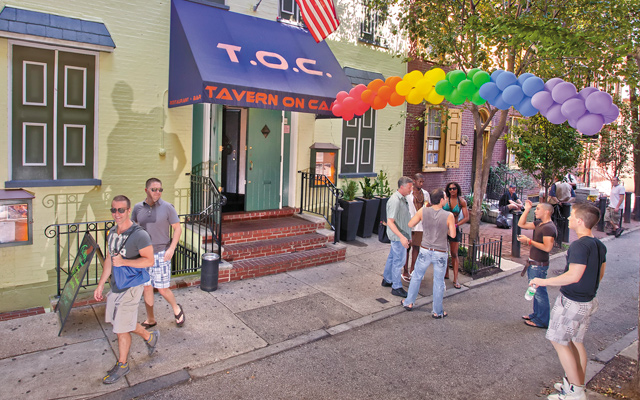 Tavern on Camac. Photo by G. Widman for GPTMC