To go from Upper Austria to Lower Austria, you travel…east? Logic may not prevail here, but beauty does. So, start the pageant in Salzburg and prepare to be awed. I came for the rocks. The stony mountains are beyond amazing. And so is Salzburg’s rock star, Mozart. Might as well christen the town Mozartburg, but it’s actually named for the white gold that made its fortune: salt (salz). 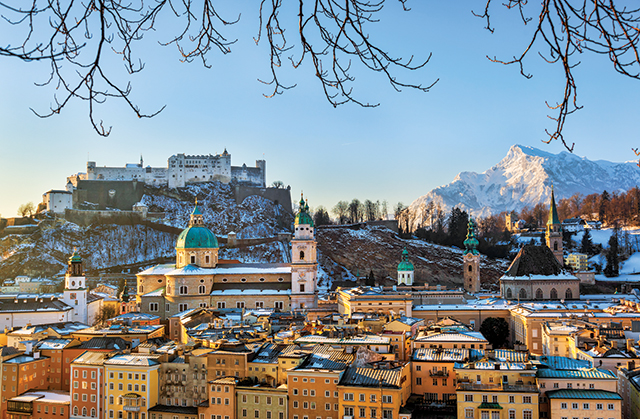 I wasn’t alone in paying homage to the musical virtuoso whose 260th birthday is this year. On Mozartplatz, tourists brandishing selfie sticks posed before his statue. It’s one of the town’s public plazas surrounding the cathedral where Mozart’s parents were married, their baby boy was baptized, and, not much later, played the organ. In his birth house on Getreidegasse — a Roman road that morphed into the medieval main drag here in “the Rome of the North” — you can spy his infant violin, a lock of hair, his silken wallet, and the most authentic portrait of all those be-wigged lookalikes.

Across the river you’ll come upon the family’s later residence, housing the piano upon which the five-year-old composed, along with employment contracts and manuscripts. In the gift shop, his portrait enhances every possible surface, from golf balls to Hello Mozart t-shirts, from tissue packets to rubber duckies.

You can hear his music all around town, from concerts at the Residenz and Mirabell Mansion to St. Peter Stiftskeller, the oldest restaurant in town. Between courses in a candle-lit chamber, musicians in velvet waistcoats back a pair of lusty opera singers.

Salzburg’s history museum, facing Mozart’s statue, includes an exhibit devoted to Mozart Mania, which didn’t erupt (poor kid) until decades after his death. (Michael Haydn stole all the glory while Wolfgang was alive.)

It adjoins the DomQuartier, which connects buildings once the domain of rulers alone and now open to us mere mortals to wander a maze of 180 rooms framing three courtyards. In the ruler’s former Residenz, “the political heart of Salzburg,” Mozart made his court debut. A passage leads to the organ loft of the grand Dom (cathedral), then the art gallery (lots of rosy Rubens); the Panorama Terrace overlooking the streetscape; and treasures from St. Peter’s Abbey, the oldest in German-speaking lands.

But Salzburg isn’t frozen in its past. To unravel current thoughts, explore its pair of contemporary art museums — one presenting visual art as social critique (think Hogarth, Goya), climaxing in walls covered with graffiti manifestos such as “Brexit, You Brex My Heart” and “Trump, Don’t Push the Button.” The second, on a mountaintop ascended via elevator, it’s Exiles as Modernist: musician Schoenberg to artist Kokoschka, plus photos of book burnings in 1938.

Speaking of fine eats, a lunch at K & K, amid the town’s who’s who on Lederhosen Thursdays (dirndls, too; they’re no longer just for holidays), also pays homage to tradition: venison carpaccio, rack of deer, and my choice, a classic composition of veal liver with potato-celery puree and apples.

Salzburg’s gay scene sizzles at bars like: 3Steins, Be-Five, Daimler’s, and Mexx; gay civil unions at Mirabell, that gorgeous Baroque palace. For more info on this gay-friendly city, where even the stoplights feature gay and lesbian couples, visit www.salzburg.info/en/.

Then, just when you think the visuals cannot be improved upon, they are. Journeying around the hiking/skiing haunts surrounding Bad Gastein and its neighbors, I kept snapping calendar-worthy shots of snow-frosted mountaintops melting into green fir and blazing aspen in valleys of sheep and cattle (soon to be dinner).

Bad Gastein itself, once “the Monte Carlo of the Alps” thanks to its healing thermal waters and resorts for the rich and famous, has faded into a ghost town, its wondrous waterfall the most vibrant sign of life. That and the enchanting chapel of St. Nicklaus, faint with 14th-century frescoes, below Hotel Miramonte, where I’d stay forever if they let me: a minimalist setting framing drop-dead views, with cowhide carpets and art books strewn everywhere, even in its glorious spa. Hiking trails start right outside the door.

We patrolled the countryside to lunch on local fare at Unterbergerwirt, with more letters in its name than seats. The pumpkin soup, one of Austria’s best-kept secrets, was superb, as was the local lamb and fish that followed. Then, dinner at Hotel Bertahof, just as cozy, where dirndled servers delivered deer salami, duck liver salad, then the rest of the bird crisp-roasted with currants and apples.

“I saw you hiking yesterday,” winked my cabbie as he put me on the train to Krems, centerpiece of the Danube’s Wachau Valley and a fine base for exploring the vineyards climbing the river’s banks. But first, explore the town itself, popping into the blaze of Baroque churches. Nothing traditional, however, about its Museum of Caricature, whose very facade mimics the peaks of a jester’s cap. “Caricature,” a guide explained, “must have an opinion,” so political cartoons strong on black humor prevail here. The exhibit “Culture on Four Wheels” uses autos as a metaphor for power and sex, as in the two-by-two lineup of cars at Noah’s Ark and trio of European leaders caught endlessly circling a roundabout.

Relief from comic relief at Kaiser von Osterreich, whose informal setting serves as launching pad for forward local food, such as homemade noodles with wild mushrooms and beef tongue; roast catfish atop pumpkin risotto; or venison with red cabbage. The next night, modern takes on classics with Blauenstein’s prix-fixe: char with figs and orange; salsify soup; saddle of veal and sweetbreads with potato-pumpkin dumplings; and crepes slathered with apricot jam.

I’d gazed at those apricot trees while floating down the Danube as we cruised to Spitz, and time to eat again. Gasthof Prankl welcomed us with a glass of Gruner Veltlinger, “the most famous wine of Austria” in “Austria’s most famous wine region,” where vineyards pleat every surface of the Wachau Valley, as I learned at Wine Experience WinzerKrems. The 990-member co-op’s exhibits explain terroir and varietals: GV, Riesling and the red Blauer Zweigelt (tastings, too).

Spitz boasts a hilltop castle of 1285 from which to view the world of wine. Then explore the world of water below at the Danube Shipping Museum, with relics of long-ago wrecks and intricate models of medieval merchant ships and teams of horses to pull them upstream until the advent of steamships in the 1800s. From there, it’s only a 50-mile hop to Vienna, and (sob!) home. For info, visit www.austria.info/us and www.salzbureg.info.

Endnote: Vienna off the Grid

Vienna inside its Ring Road is, in a word, stately: all opulent, oversized buildings. It’s also crammed with tour groups, buskers, and ticket sellers in powdered wigs. I love it. But I also love to discover neighborhoods where people live, work, and play, unhindered by tourists bearing selfie sticks. (For Vienna in a Day, see the June 23 issue.)

I tromped from Operngasse west to Mariahilfer Strasse, poking into boutiques, galleries and cafés, starting at Heuer, a veggie garden-cum-café that’s packed for breakfast till after the opera lets out. On to Radlager, a bar/bistro, music venue and bike shop. Next door, Sussi specializes in teatime amid tongue-in-cheek plush. At Comod, a gay gent sells lacy ladies’ lingerie. Pur-a, its counterpart, is a pristine fashion icon using fabrics free of color or prints — just “pure.”

Point of Sale does a bang-up breakfast for the neighborhood’s bohos while multitasking as a gallery and source for modern furniture. Flo Vintage scores fashions from 1880 to 1980. For vintage from the ’30s and ’40s, Nostalgiae is your spot.

Babette sells cookbooks and spices, while nearby Alt Wien roasts and brews coffee. It’s Nachbarin for elite ladies’ designs, with a stop at Café Sperl, where nothing has changed for a hundred years. Then scan up-and-coming designers’ duds at Unikatessen and eye-catching casuals at We Bandits. Phil (short for philosophy) is the ultimate concept store, combining books, music, lamps, furniture and dreams. If that doesn’t do it for you, head to Buy Yourself Happy and test their claim.