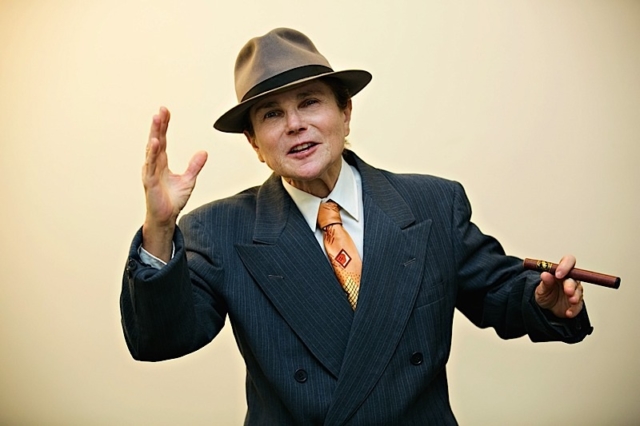 Tovah Feldshuh as Joe “Yussel the Muscle” Jacobs. Photo by Lauren B Photography.

Tovah Feldshuh has triumphantly returned to Minnesota in a vibrantly gritty turn in the role of a man: Joe Jacobs, the American Jewish manager of German heavyweight champion, Max Schmeling. Dancing With Giants by her brother, David Feldshuh, is a text firmly rooted within the 1920s and 1930s. He resists the trendy temptation to stray into postmodernist commentary about how that period might relate to any other time period. His script is a credible reflection of a controversial time on its own terms.

The playwright, who has also directed the piece, captures the time when Nazism was beginning to shift into full gear. The brazen Jacobs, nicknamed “Yussel the Muscle”, was a continuous fountain of audacity as he navigated the slurs and horrific threats of Joseph Goebbels, Hitler’s propaganda minister. He also influenced the American boxing scene with panache. In the U.S. it was a time when the nation was beginning to steel itself as much emotionally, as militarily, against the Third Reich.

Tovah crackles as a kind of combination of Ruth Gordon, James Cagney, and Bertolt Brecht’s Sergeant Schweik. Her Jacobs is that moth always flying just a little too close the flame and always on the verge of sticking it to the fascists. This observant actress is an ironic joy to behold. She flickers street-smart wise guy mannerisms with fabulous flair, while always hewing to the play’s serious intent.

Tovah is matched with masculine sturdiness by Sam Bardwell’s Schmeling. Bardwell brilliantly reveals a stoic man who is nonetheless tormented by the anti-Semitism his nation compels him toward. We get a sense of how overpowering the pull to racism can be when it has been institutionalized with death threats by a fascist government.

James Cunningham is diabolically witty as Goebbels. We get a disturbing sense that the man is, as he actually was, an institution unto himself. Ricky Morisseau gives charismatic support as Joe Louis, world heavyweight boxing champion and arguably the most consequential African-American athlete in the history of sports.