by Brett Stevens
Issue 468
May 2, 2013
The repeal of “Don’t Ask, Don’t Tell” made headlines across the country. Brett Stevens focused on the emotional story of two marines coming out via YouTube before finding each other and falling in love. 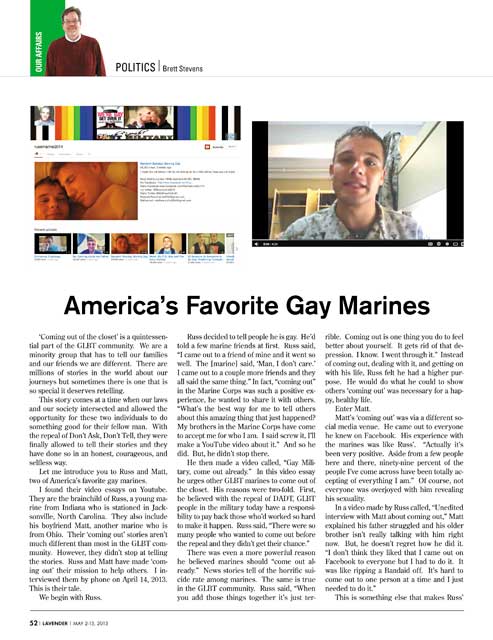 Community Awards
by Shane Lueck
Issue 479
October 3, 2013
The Lavender Community Awards Issue celebrates those who demonstrate dedication and leadership in working for the advancement of the rainbow community. 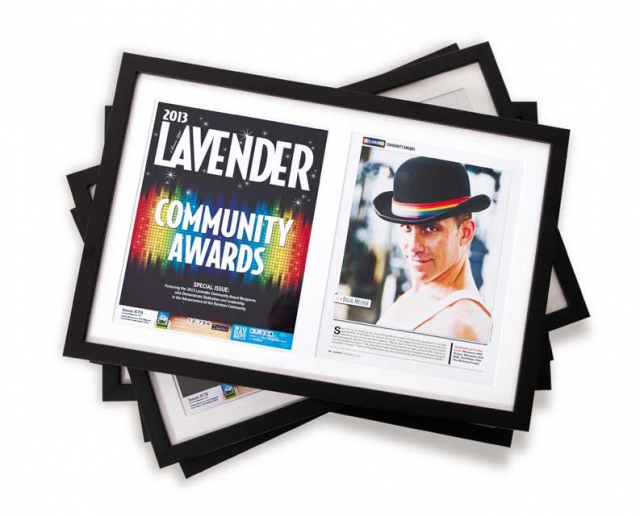 by Alyson Newquist of Bash Collective
Photography by Canary Grey Photography
Issue 481
October 31, 2013
With a backdrop of Bent Paddle Brewing Co. in Duluth, Bash Collective brought us the newest in North Country trends for fall weddings and same-sex fashions for women.

by Joy Summers
Issue 468
May 2, 2013
Profiling Katie Greeman’s wine bar and restaurant, Spill the Wine, Joy Summers shared everything from the food to the architecture to the poignant history and love story behind the establishment. 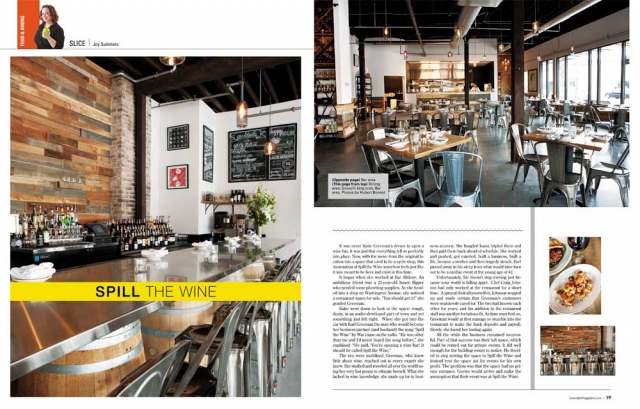 by Terrance Griep
Issue 471
June 14, 2013
Grappling with the complexities of identity, Griep profiled Darin McDonald, a gay man who has to “come out” as a cop over and over again. McDonald bridges the divide between the St. Paul Police Department and the GLBT community. 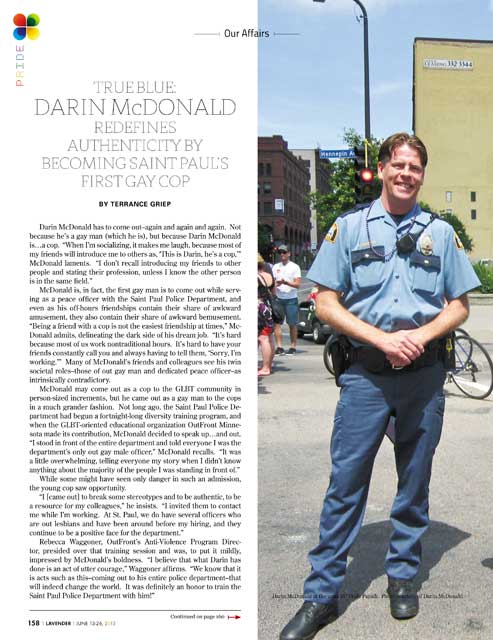 by Sean Johnson
Issue 465
March 21, 2013
Who knew the Bloomington Civic Theatre’s production of “The Scarlet Pimpernel” would be the perfect backdrop to launch a new romance? Nick Kunz and James Kennedy met while working on the production and have since begun planning their wedding. 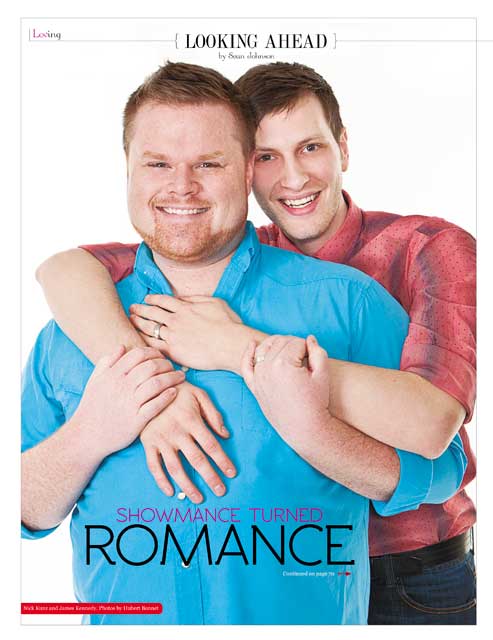 Written by Brett Dorrian
Photography by Brett Dorrian
Issue 480
October 17, 2013
Featuring Tea Simpson and DJ Shannon Blowtorch as models, Brett Dorrian showed just how easy it is to transform into one of the most iconic couples for Halloween. Snow White and Prince Charming are just a few how-to steps away. 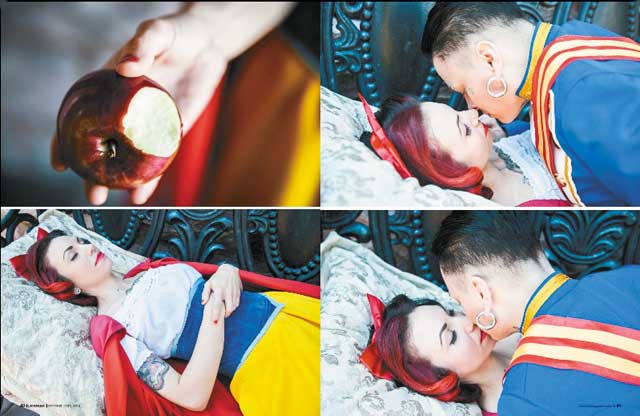 8. Weddings: Happily Ever After

Produced by Julie Lyford for Fabulous Functions
Photography by James Ramsay, Donae Cotton Photography, and HM Photography
Issue 471
June 14, 2013
This same-sex weddings piece in the 2013 Pride Issue presented three couples as their wedding dreams came true at the Van Dusen Mansion. Featuring the products and work of local shops and artists, it offers wedding resources for others planning their events.

Produced by Style-Architects
Photography by Photogen, Inc.
Issue 465
March 21, 2013
Spring is a magical time to get married, and these two couples illustrate why that is. The fashion features in Lavender’s 2013 Spring Wedding Issue brought in the bright colors and trends sweeping the wedding industry. 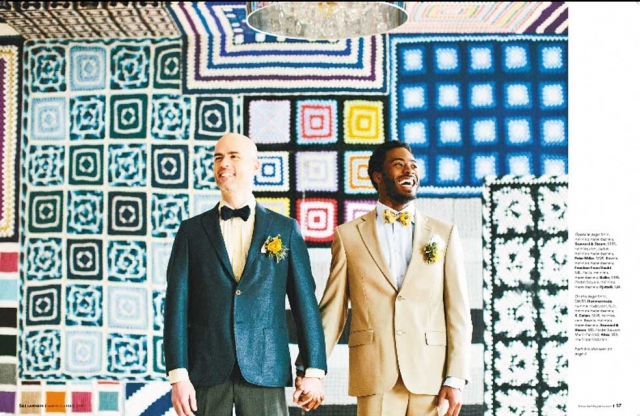 10. Police Chief to Make It Legal 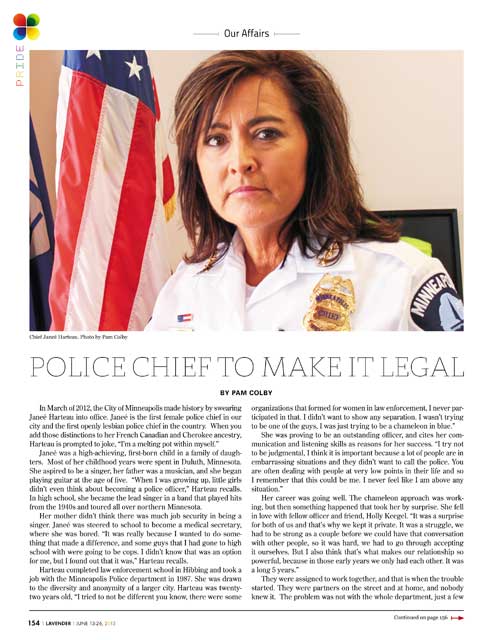