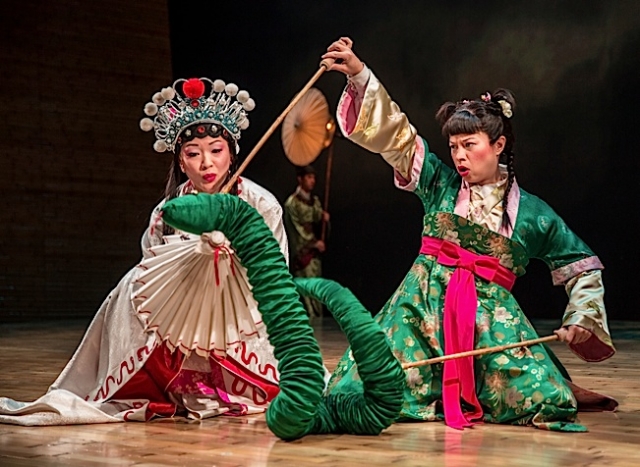 Mary Zimmerman is renown for her stage adaptations of ancient stories. Works by Homer and Ovid have been brilliantly shaped from written literature into theatrical events. Her current adaptation of the Chinese fable, “The White Snake”, is yet another example of her unique way of connecting to the collective unconscious which she has stated to be the wellspring of her work.

The Guthrie staging has several actors from outside the Twin Cities and though some will object to this, the Big G nonetheless hires lots of locals all year long, and if you are going to be a sophisticated cultural center you must spend time creating with those outside your circle.

When the White Snake (Amy Kim Waschke) temporarily transforms into a human along with her friend and assistant, Green Snake (Tanya Thai McBride), she meets a poor young man, Xu Xian (Jake Manabat), whom she falls in love with immediately. She generously, albeit on the wings of romance, extends her hiatus away from the mountain where she has long, long resided in order to wed and sets up a prosperous pharmaceutical business for Xu Xian.

However, a judgmental Buddhist abbot, Fa Hai (diabolically played by Matt DeCaro), plants seeds of doubt in Xu Xian’s mind as White Snake has not yet revealed her true essence to her husband. (One, may ask: does it even matter? Just how much do we need to know about those we love? At what point does demanding to know long-winded details of a loved one’s past become an example of conditional love?)

Zimmerman infuses lyrical stage movement reminiscent of Japanese Noh and Kabuki theater traditions. The large ensemble moves fluidly from scene to scene and shapes a timeless story about how those in power can divide and conquer the very soul of those who have lived sheltered lives. Will Xu Xian give into Fa Hai’s chauvinistic views against snakes? Or will he have the spiritual mettle to overcome the way the Buddhist abbot poisons his mind? See The White Snake on the Guthrie’s proscenium stage and you will likely find yourself captivated by Xu Xian’s inner conflict and the hateful judgements targeted at the White Snake, even when she has manifested “acceptable” human form. It’s also interested for an American audience, very clued into abuses by clerics of the Abrahamic religions, to see that other religions outside the Abrahamic Big Three (Judaism, Christianity, and Islam) are also subject to cruel corruption.