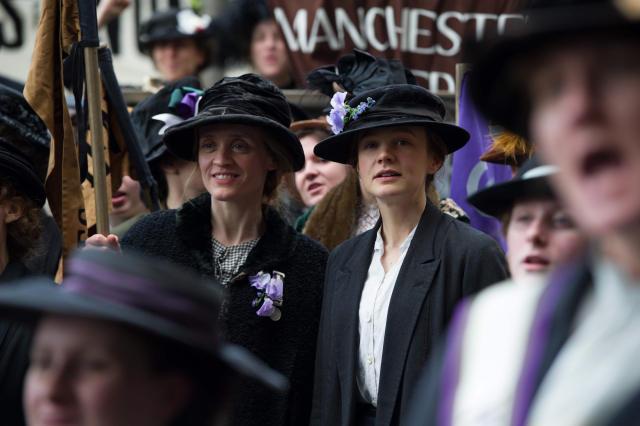 Violet Miller (Anne-Marie Duff) and Maud Watts (Carey Mulligan) campaign for women’s voting rights in director Sarah Gavron’s Suffragette. Photo Credit : Steffan Hill / Focus Features
Dramas relating to civil rights in the broadest sense often follow a formulaic, heroic approach: the trials and triumphs of the exploited laborer, the slave, the muzzled woman, the persecuted person of color, the disrespected gay politician. All of these put forth their case and, if done well, we are both instructed and moved. These films appeal to both intellectual intelligence and emotional intelligence and, when well-done, can shift consciousness.

The best of some such films also capture vividly, if not viscerally, the economic conditions within their stories. Spartacus, Norma Rae, Newsies, and 12 Years a Slave are supreme examples that have that formulaic-heroic trajectory. These four succeed extraordinarily well not only because of their layered characterizations, but also because of the rendered intensity of their economic worlds. A new picture that also succeeds as well as any of these is Suffragette.

Director Sarah Gavron and screenwriter Abi Morgan are acutely aware of the 1912 London setting wherein sweat shops were run with stringent, if not tyrannical, protocols and procedures. This working standard was the norm for laborers, male and female, and both genders suffered horrendously. Gavron and Morgan know this empathically. One can also assume they realize mercantile and white collar workers were also at the mercy of systematized physical and mental cruelty. Men in managerial positions were under the scorching eye of their male overseers to keep things running by any means necessary. That dark self-serving mantra: “Make sure you dehumanize others in order that you yourself will not be dehumanized.” Of course, to dehumanize others is to degrade one’s own humanity. Boys and girls were also overworked like indentured slaves.

So the system had fear, brutalization, high blood pressure, and retaliation comprising its very infrastructure, running practically everyone. This is something organically built into Gavron and Morgan’s apprehension. Therefore, we see that the men also suffered degradation, compelled under threat to do dirty work the men above them demanded. This includes “keeping women in their place.” If they deviated from what was told them, their wives and their children would suffer. Misogyny and oppression, both of and by men, were systemic. Gavron and Morgan know this. They’re not into fighting the proverbial “battle of the sexes,” but they give us the big picture that affects us all, even today.

Sweat shop women lived shorter lives because they were treated like beasts of burden. There were no rules regarding overtime and safe working conditions. The young and nubile were low hanging fruit that could be plucked by men of the managerial class, molested and raped with impunity. Loss of virgin status could damage a female’s chances of marriage and or make her the object of derision, even by those closest to her. The same could happen to older women. When women were terminated from their jobs, with options severely limited, they could beg on the street, be a “go-for” for underground economic interests, or be a pimped sex worker.

Within the Gavron/Morgan overview, this dynamic is scrupulously shown to be symptomatic of the economic system. There is a scene where a young working girl is gathered up to be the plaything of a crude man of the managerial class. That said, the film is very clear that it’s not making some generalization about all men, or even male human nature necessarily. Nor is the film capitalizing (no pun intended) on male crudeness in order to propogandize women’s conditions. Rather, this scene of the crude molester is of a proudly ignorant man in a privileged position in an intractably corrupt social system. 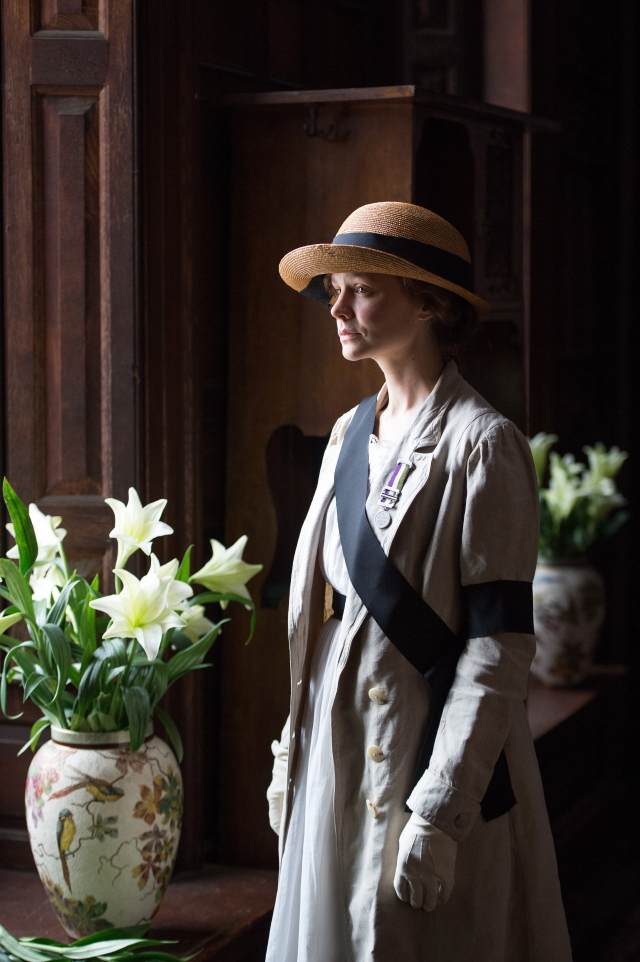 I state all this because I hope that men and older boys will flock to this truly great film and not get wafted away from it by mindless conventional un-wisdom that Suffragette is a “chick flick” (a term I abhor) or because it’s not an action film or a sports event that men and boys tend to be habitually swept up into anymore. There’s nothing wrong with action and sports, but males are targeted to fill seats for those things to a chronic degree. However, the men who see Suffragette, will see an edge-of-the-seater and rather than feel blamed, will likely see “how the other half” once lived. We all, women and men alike, stand on these women’s shoulders.

Suffragette depicts the socio-political awakening of 24-year-old Maud Watts (an Oscar-caliber Carey Mulligan), who unintentionally, yet fatefully finds herself speaking before male politicians about women’s right to vote. Bear in mind, that only men could be elected to office in 1912. This determining action stigmatizes Maud at work, in her neighborhood, and in her own household. She swiftly becomes something close to a pariah, endangering her right to work and to keep her child. That’s right, simply for expressing a viewpoint.

But hold on! Suffragette is not some boosterish pat on women’s backs that gushes “You’ve come a long way baby!” If you reflect on the film, Gavron and company reveal the socio-gender dynamics of the time, in which men and women were calcified into rigid roles. This apprehension is part of its genius. We might ask if things have changed so much today, when both exhausted men and exhausted women often work themselves ragged for several employers to simply make ends meet. The old roles have mutated in ways today that still are to be reckoned with. The expectations of both men and women today are reinforced, often subconsciously, by the elusive octopus known as economics and its multi-pronged tentacles. 1912 and 2015 can be seen similarly if we choose to look.

For, example, Suffragette portrays what many of us would call an unconstitutional approach to surveillance, probably more controversial today than it was a century ago. This is a legitimate concern nowadays of men across the political spectrum and the film will appeal to many of those men because of that. And most of them, I daresay, will be stunned by what he reminds us of. Ditto women! Women’s suffrage is after all a part of history many of us, male and female, know next to nothing about.

Maud Watts is a composite character, shaped by Morgan. Other characters are based on individual fact. The crowd that recently damned Roland Emmerich’s beautiful film, Stonewall, which I reviewed for Lavender, may also find themselves at odds with Suffragette. Beware the danger of politicization and the linear mentality that ironically too many activists espouse. It’s often the crude misapplication of political dogma onto a nuanced and layered work of art. Art is to be subordinated, at all times and at all costs, to a political agenda in the eyes of some activists. Or critics who feel they have to placate the loudest activist voices, not because those voices know what they’re talking about, but because the critics feel intimidated. So I hope Hoffman’s composite element won’t fuel the fire of the politically correct.

Though Suffragette is unmistakably and passionately feminist, if we are honest, we know that there are always a large group of us who see things through an identity politics lens. To point: the crowd who self-deceptively refuses to see the dark side of our own and sibling movements, much less countenance legitimate questions. It’s easier to point fingers at conservatives and traditionalists. Suffragette will irritate some because it frankly shows the terrorist aspect of the suffrage movement, stealthily portrayed by the terrific Helena Bonham-Carter.

Moreover, Suffragette’s male lechery and torture aspects could bring contemporary concerns of sex trafficking and war crimes to mind. This is not a theme of the film, but women trapped in degrading employment is.

Mulligan gets brilliant support from Anne-Marie Duff as Maud’s cohort, Violet Miller, an endearing Natalie Press as the heroic Emily Wilding Davison, Geoff Bell as a lecherous sweat shop tyrant, Ben Whishaw as Maud’s fragile husband, and the darling Adam Michael Dodd as Maud’s sweet little boy, George. Some audiences will undoubtedly include persons who will mock the separation of mother and son or will criticize it as melodramatic, which indeed Suffragette honestly is. However, such reactions say everything about the mocker rather than the film. Perhaps years on end of divorce, home foreclosures, and innocents killed in wars funded by our tax dollars have jaded us to collateral child suffering. It must also be noted that Gavron gets compellingly honest and authentic acting results in what admittedly could have been a button-pushing melodrama. But the heartache and the outrage spirit forth organically. 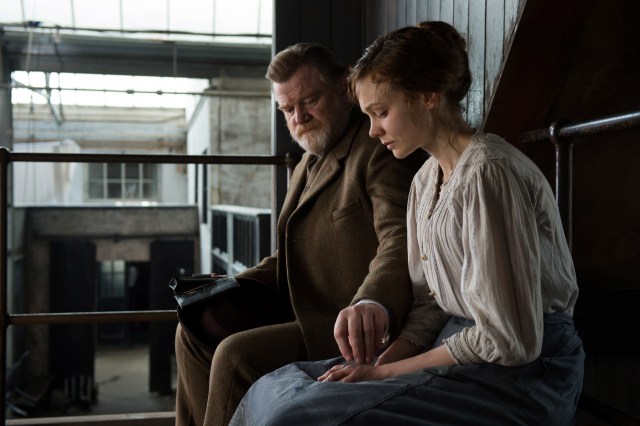 Suffragette’s other Oscar-caliber performance is Brendan Gleeson’s. He is utterly shocking in the supporting role of Inspector Arthur Steed, the official leading a group of detectives to spy on the suffragettes. Though Steed is in alignment with the law for securing public safety, he crosses the line in other ways. The torture scenes, which believe or not, today’s public knows little to nothing of, are disturbing. Torture was employed by Queen Victoria and in our own nation by Democratic President Woodrow Wilson, who ironically gets the credit for finally sanctioning the vote for women. Moreover, Steed’s stated sexism spoken of throughout, perceptively penned by Morgan, is a pure echo of Victorian values at their most harshly judgmental. As he goes from attack dog, sanctioned by Victoria’s Crown, to closing in on the suffragists, we see Steed’s misogynist armor eventually crumble beneath the shame of the institutionalized brutality he at first zestfully inflicts upon the women until he finally realizes his shame. And that shame is palpable.

The other Suffragette performance that lives in its own rarefied dimension is that of Meryl Streep as mysterious suffragette leader, Emmeline Pankhurst. It’s not much more than a cameo role, but it speaks the foundation elements of women’s right to vote and therefore, be full citizens. Streep’s delivery is vibrantly commanding. The performance lives in a unique space in film history, where an iconic star has a vivid smaller role in a great film that registers as something transcendent. I put it up there with Orson Welles in The Third Man and Yves Montand in Z, where the roles are small but the performances are unforgettable. And of course, so are the films themselves.

Of course, Suffragette benefits exponentially from a design team that manifests the dreariness and lifestyles of the period: Edu Grau’s bleak cinematography, Barbara Herman-Skelding’s grimly striking costumes, the set design and decoration team of Alice Normington, Davie Hindle and Choi Ho Man, and a haunting score by Alexandre Desplat. Oscar nomination caliber all around.

Some will understandably have doubts about Morgan and Streep, given the former’s screenwriting for and the latter’s lead performance in the Margaret Thatcher biopic, The Iron Lady. Indeed, it waxed glorifying as a justification of the late prime minister’s extreme policies, and that is certainly a pity. However, one must critique one work at a time, so that it is seen in its own right. Those who loathed Iron Lady will likely admire Suffragette.