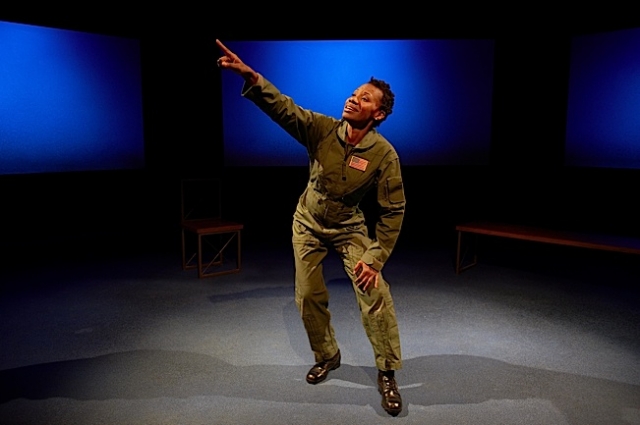 Grounded, a penetrating solo play by George Brant, seriously examines the morality of drone warfare and psychological issues of being an “armchair” warrior. Moreover, the warrior in this case is a woman.

A compelling Sha Cage plays a military fighter pilot simply called “Test Pilot”, re-stationed to Nevada to pilot drones instead of actual aircraft because of pregnancy. With husband in tow, this is no longer the adventurous life she had planned for.

At her new post the test pilot sits at a screen flanked by fellow “armchair” warriors, immature and mediocre. They advise her on who and what to aim at as she operates a drone eerily and viciously known as “the reaper”. One wonders if her comrades see their duties as a video game or a task in which life or death must be seriously weighed.

Cage and director Wendy Knox are blisteringly honest in revealing the pilot with all her flaws. She can be crude, lovable, callous, endearing, and even detestable at times. As she cracks up mentally she reflects the grim realities of high tech warfare and war-making.