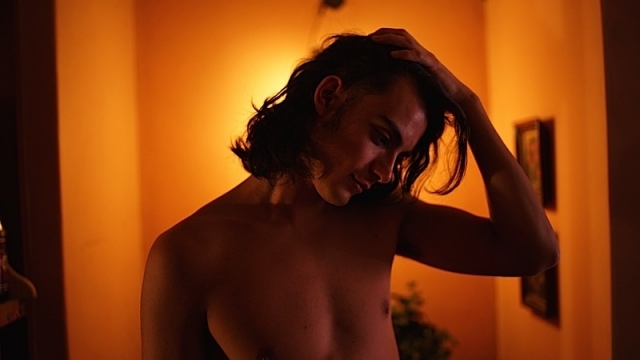 That period in the early to mid-1980s when word was still getting out about a lethal virus known as HIV is the backdrop of This is Not Berlin (Esto no es Berlin). The setting, like the title says, is not Berlin, but the counterculture of Mexico City. Berlin being a metaphor for all things liberated. An archetype evoking the Weimar era.
That spirit of liberation and libertinism fuels the drugs and drink realm of the sensation-infused underworld discovered by two older high school boys, age 17, in the scintillating, yet cautionary, Hari Sama film. Sama is straight himself but the film is a personal reflection of his early exposure to what was then called the “gay scene”. In the ’80s, even in the biggest cities, one could still be stigmatized for simply being seen going in to “one of those places”. Gay subculture served as a forbidden crossroads for adventurous people of different sexual orientations, those in the arts, and those inclined toward political activism. Not to mention the underground economy. As one character puts it: “this is an everything bar”.
Though now in his 50s, the filmmaker’s reflections are largely fond and appreciative toward gay men. Indeed, gay men at their best can be caring facilitators of understanding things out of the mainstream. Nonetheless, the situations portrayed are problematic to say the least. Serious questions of personal boundaries emerge throughout and those questions are something homosexual and bisexual men and women, as well as straights who advocate certain lifestyles, would be wise to muse over. To be sure, Samas is certainly not condemnatory, but he knows that life can be a minefield. This is a quality that makes This is Not Berlin remarkable and a must-see film. He also plays an adult character himself in this, his own film, whose nonsexual influence over a young man raises ethical questions. One has to admire the honesty. 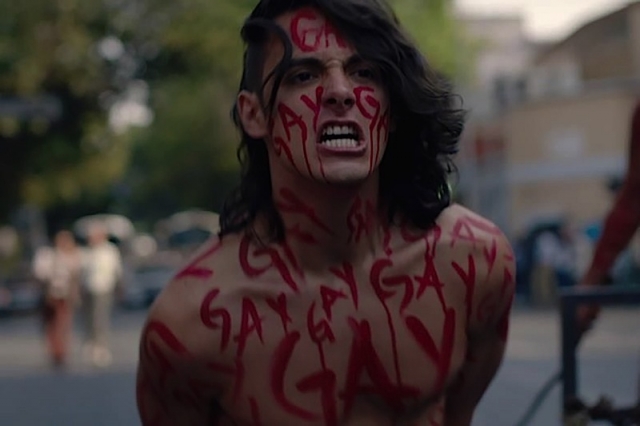 Main character Carlos, based on Samas, is a nonconformist teen who still has a way of fitting in with the his school’s in crowd. He’s a unique blend of youthful virility and androgyny which actor Xabiani Ponce de Leon manifests with a luminosity that sometimes borders on the incandescent. Imagine a late adolescent prequel version of a Mexican Robin Stone, the man who drives women—and men—crazy in Jacqueline Susann’s The Love Machine.
Carlos’s buddy, Gera, manifests that same blend but he’s not the aloof magnetic figure that Carlos is. What Gera lacks in mystique, however, he makes up for in a puppy-like quality that’s endearing. But his sideline of selling porn to other high school boys tells us he’s not as innocent and naive as he appears. Jose Antonio Toledana sparkles in the role and the two actors have a winning mutual chemistry. 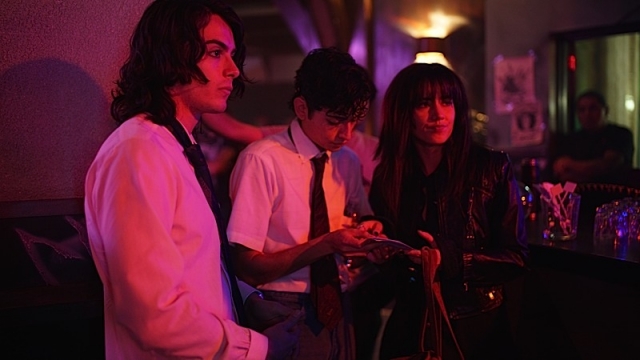 When Gera’s slightly older sister, the perpetually glib Rita, too cool for her own good, sneaks them into clubs their lives’ paradigm shifts. The boys are sensory-overloaded with a brave new underworld of opiates, booze, avant-garde art, and older predatory gay men poised to seduce and groom, even if a guy is underage.
Ximena Romo’s Rita is an anarchist feminist who rails against Patti Smith’s late 20th century lyrics being disallowed from her classical poetry class. She rails against what she generalizes as sexism and her punk rock aspirations seem rooted in an unearned sense of nihilism. Romo is the real deal in this role. She impresses like an electrical current and we wonder if she may end up electrocuting herself, not to mention those around her.
Many will understandably encounter This is Not Berlin as nostalgia or wishing they could have lived in that time and place. But something more wistful, more prognostic, is roiling under the spirit of Samas’s remembrance. The fun-loving young artists and “Party Hardy” crowd seem possibly doomed to consequences of what they may be doing to themselves and how the culture will react to that. Some will clearly be casualties of what was still called in those years, The Permissive Society sprung from the Sexual Revolution. 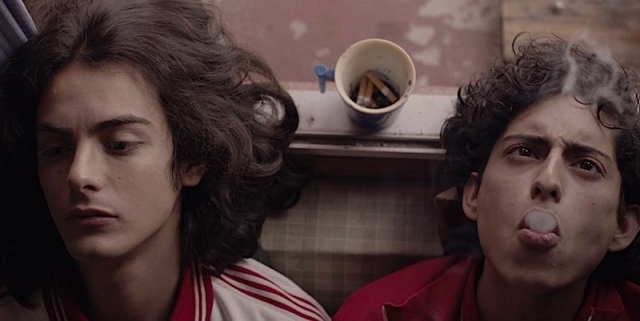 The fascination with Punk, New Wave and transgressive performance art are melded to a pre-occupation with solipsistic discontent, if not malcontent: nude muck-covered bodies to dazzle an audience perhaps more than illuminate; tribalistic face painting minus serious inquiry into archaeology; full frontal nudity; primal screams and lyrics minus vocal technique that could lead to vocal nodules! All these have an ominous low-key undertow that Samas perhaps looks back upon with sad hard-won insight.
These things are felt in tension with This is Not Berlin’s intrinsic counterpoint: that of the disintegration of the Mexican family on the eve of the nation’s descent into a narcotics-driven culture. One wonders if grievances so vehemently expressed against tradition are unraveling the order of Mexican society into incremental chaos. The counterculture is quite effective at citing both legitimate and illegitimate complaints, but what plausible solutions does it have to offer?

This unraveling is punctuated by a suicide and movingly portrayed responses to it. As the emotional effects of hedonism unfold, the real essence of each boy’s true sexual orientation is revealed to himself personally and to the audience watching Samas’ film. That awareness is dizzying, arousing, discombobulating, perilous, opening whole new vistas. How will they respond to that? How will each navigate the silent killers of HIV/AIDS and the drug cartels that loom wraithlike on the horizon? Have the boys learned too much too soon? Or would naivete make them even more vulnerable had they not experienced immature Rita’s misdirection? Or was their emergence into this new consciousness inevitable? What is the older generation’s culpability in all of this?
This is Not Berlin
Opens Sept. 13
Lagoon Cinema, 1320 Lagoon Ave., Minneapolis
612-823-3020
www.landmarktheatres.com