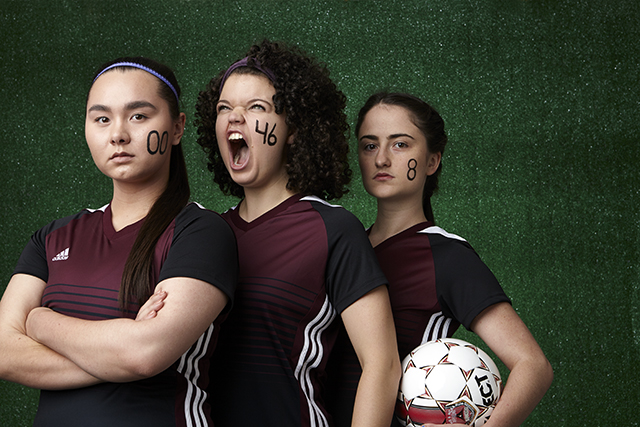 Playwright Sarah DeLappe may well have written what will come to be regarded as one of the best plays ever about sports. Moreover, it is all about high school girls and sports. The game at hand is soccer. The play’s title and team is The Wolves. It was a finalist for last year’s Pulitzer Prize for Drama. The Jungle Theater has staged an exhilarating area premiere that features some extraordinarily talented young actresses in top form as the teammates.

Director Sarah Rasmussen reveals The Wolves as an utter kaleidoscope of a comedy-drama wherein her entire cast impeccably overlaps, responds, and reacts to one another in a beguilingly naturalistic and conversational manner. Each scene is comprised of various warm-up stretches in which the players banter harmoniously and antagonistically. They communicate about issues ranging from the historical (the brutal Communist regime, Cambodia’s Khmer Rouge) to the interpersonal (issues of authority within the group) to the intimate and personal (the agony of the ramifications of an injury). At the beginning, The Wolves appears to be playfully lighthearted, but then sneaks up on you with visceral emotional power.

A term coined too loosely in recent years is the careless “instant classic”. Classics are only revealed to be classics after they’ve stood the test of time. However, The Wolves, I predict, will definitely do that. It is a feminist play that doesn’t hit you over the head with politics and hyperbolic judgments, so its appeal is universal and its effect is healing. Moreover, it renders a marvelous diversity of thought among the girls it portrays. Its females, as in real life, are not all cut out of the same value system. DeLappe, I think it can be safely said, has written a masterpiece. And the Jungle Theater has brought it to life with brilliance.