The Wisdom of a Filth Elder: In Conversation with John Waters 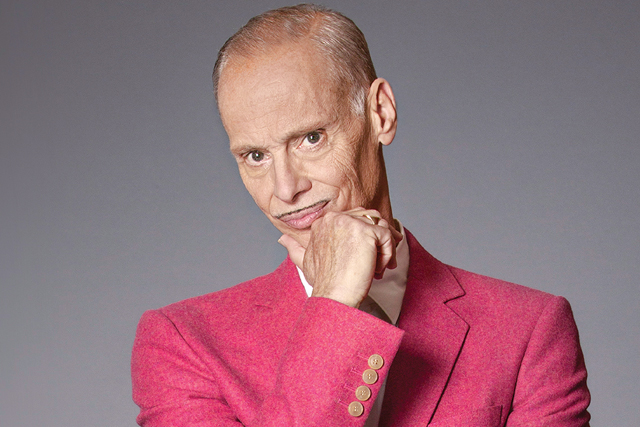 [et_pb_section admin_label=”section”]
[et_pb_row admin_label=”row”]
[et_pb_column type=”4_4″][et_pb_text admin_label=”Text”]John Waters will be bringing his “This Filthy World” tour to The Parkway Theater on Feb. 29 and March 1. Photo by Greg Gorman

John Waters has an insider tip for you: everybody in show business is secretly insecure.

“Why else would we enter a business that makes strangers tell us we’re good (in order) to succeed?” the 73-year-old cult filmmaking icon asked me over the phone recently.

That insight isn’t so much a revelation as it is a self-aware contrast with his own distinctively confident world of comedy and art, both as a young artist who boldly brought to life his macabre visions of sublime trash cinema against the zeitgeist of moral outrage in 1960s Baltimore, and as a self-proclaimed “Filth Elder” today, along with other titles he proudly bears: Prince of Puke, Duke of Dirt, Pope of Trash. All are distinguished anointments derived from his glorious oeuvre of grotesque, hyperbolic satire.

Crazy, he suggests, might even be the best way to characterize his own confidence in pushing through with his subversive art over the past fifty years.

For all of the artistic shocks he’s gifted his audiences, his primary ambition is refreshingly simple: “I just want to tell stories.”

His work spans multiple mediums, though Waters is quintessential in his contributions to queer cinema and counterculture. His films are branded in the consciousness of his revering audiences into the present day, and part of his draw seems to be that he has a distinctively strong sense of himself and his ideas. Without his gumption, he may never have assembled his central Dreamland acting troupe that generated lasting reverence for people like Divine, Edith Massey, and Mink Stole. Likewise, some highly memorable, socially risky, immortal scenes may never have made it to the screen (think Divine’s infamous unmentionable snack in Pink Flamingos).

His ambition and work ethic sees to it that he continues offering new materials, including his 2019 book, Mr. Know It All: The Tarnished Wisdom of a Filth Elder. He’s currently working on yet another book, his twelfth published work, and regularly tours with live material. Waters returns to Minneapolis with two sold-out performances of his long-running stage show, “This Filthy World,” Feb. 29 and March 1 at the Parkway Theater. In advance of his stop in the Twin Cities, I spoke with him about humor, art and rebellion.

Waters is an avid reader, preferring to wind down from his long workdays with books. I asked for some of his favorite books from 2019, and it’s a sophisticated mix: Michel Huoellebecq’s Seratonin, William Rosenau’s Tonight We Bombed the US Capitol: The Explosive Story of M19, America’s First Female Terrorist Group, and Benjamin Moser’s Sontag: Her Life and Work, an expansive portrait of Susan Sontag.

Naturally, he’s sour on the often humorlessness of mainstream Hollywood, populated with people who he thinks take themselves to seriously (“When I hear Hollywood people talk about their ‘journey,’ I really wanna gag.”). On the other side of the coin, he reviles humorless desperation, seeing right through people when they’re trying too hard to be weird or manufacturing a status as an outsider. “All the movies the critics say are John Waters-esque, I really think they’re horrible. Trying too hard, obviously just gross, but they’re not funny, they’re not witty, they don’t change anything by the joke,” he said.

His inauthenticity radar is no surprise, because through conversing with and hearing Waters describe his friendships and connections with people, he stands out as a warm and affable person, contrary to the knee-jerk impression of him his bawdy movies might leave on a casual viewer.

As a budding filmmaker in Baltimore, he befriended rejects and outliers, in turn picking up cast members for his movies in bars, like Edith Massey, and going on to work with them for the long haul. In 2014 he published his book Carsick, in which he hitches rides with total strangers across the country. In that book, he befriends a young Tea Party Republican, Brett Bidle, the seemingly polar opposite of uber-liberal Waters. Regardless, the two developed a lasting friendship (Waters attended Bidle’s wedding in 2018, plus said he stays in touch with nearly all of the other people who gave him rides). He seems equally drawn to “normal” people and weirdos who are subverting the norm, so long as there are equal parts humor, authenticity, and interesting traits. People who, unlike the Hollywood set, are likely pretty secure in themselves.

I asked who he thinks is making the biggest splash these days and keeping alive the anarchic tradition of shocking the previous generations.

“I think hackers are the new juvenile delinquents. They’re shutting down businesses and shutting down governments for anarchy. I’m not saying I approve that, but I think that is probably the new rebel,” he answered. He called the dark web today’s countercultural underground, with just one glaring setback from the countercultural movements of the past.

“The only problem with that is that they don’t have fashion, or they have bad posture. Usually juvenile delinquency causes a fashion trend, but hackers are just norm-core,” he said with a laugh.

I point out my impression that a hacker fashion staple is the hoodie. Without missing a beat, Waters offers his own irreverent opinion on that.