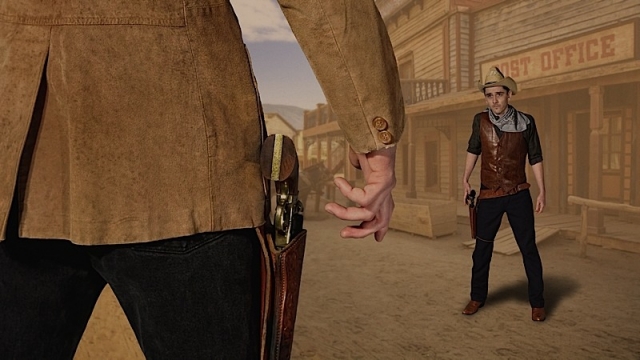 When most people think of westerns they think of Old Hollywood, John Wayne, Clint Eastwood and vintage TV— or maybe those dime store paperbacks by Zane Grey and Louis L’Amour packed in the attic left by their granddad. However, it’s not often that westerns in stage play form are selected for theater seasons. Green Grow the Lilacs, Arizona and The Squaw Man are all but forgotten, though The Rainmaker is occasionally revived. But it’s a genre that itself seems to have been forgotten. However, take heart. In this very decade there’s a humdinger of a western play which you can see on stage at Theatre in the Round Players.

Playwright Jethro Compton, also the playwright of The Frontier Trilogy, has adapted the Dorothy Marie Johnson story published in 1953, The Man Who Shot Liberty Valance, into a work where civilization and anarchism face off. She once stated, “I asked myself, what if one of these big bold gunmen who are having the traditional showdown is not fearless, and what if he can’t even shoot? Then what have you got?”

What’s notable about Compton that he is an Englishman born in 1988 with a playwriting and directing career based in the U.K. Yet he understands the historical contours of the American West better than most Americans. Early on in The Man Who Shot Liberty Valance, saloonkeeper Hallie points out to lawyer Ransome Foster that the slaughter of Cherokees had happened long ago: the implication is that Ransome lives in a fantasy adventure past. The year is 1890 in the western town of Twotrees, six decades after the Indian Removal Act precipitating The Trail of Tears and 28 years after the Homestead Act of the Lincoln administration, his second most consequential policy after Emancipation.

Compton fully apprehends that by 1890, the U.S. government and society was essentially wrestling down what could be called a massive gang culture comprised of males, who in today’s identitarian parlance would be largely defined as white. Gangs of white cowboys, cowpokes and saddletramps are frequently the source of cruelty and wickedness in the western genre—as much or more than Native Americans. Not to mention that in many westerns Native Americans are friends of and oppressed victims of whites. That said, not all cowboys, cowpokes and saddletramps were necessarily bad guys and westerns often reflect that as well.

Twotrees is a town that has resigned itself to the terroristic and sadistic whims of a gang run by one Liberty Valance, searingly portrayed by John Goodrich. In the presence of this actor’s performance there is a genuine feeling that one is in the presence of evil. It rivals Kirkaldy Myers’s chilling performance of the malevolent ‘Man’ in last year’s Mixed Blood Theatre staging of Is God Is.

Ransome, an eastern attorney en route west, has been seriously injured by Valance’s thugs while heading in the direction of Twotrees. Little does he know that Fate guided him there to bring not biblical scripture, as so many characters in westerns do, but to bring a muscular understanding of the law: that pillar of western culture with its mandate for justice sprung from the Greeks and which stands adjacent to the religious pillar of Judeo-Christianity. Scott Pearson evinces an authentic mix of insecurity, resentment, and a smoldering desire to somehow stop the pattern of violence the townsfolk have come to see as inevitable. Most people will recognize that inner struggle which Pearson plays so honestly. We’re all faced at points in our lives where we know in our heart that we should buck up and rise above the impulse for self-preservation and be courageous. One thinks of emblematic western culture icons like Antigone and Jesus.

Ransome goes too far when he teaches a black man known as The Preacher to read. Worse still, this man soon learns to read and relish the words of western culture’s emblematic playwright, William Shakespeare. A lovable Samuel Joseph gives an inspirational performance and elicits visceral fear from within when confronted by the demonically racist Valance. Ransome has already crossed the Rubicon by teaching illiterate whites to read, but to teach a black man to read and for that man to excel beyond the rest and quote the Bard with heartfelt ease, the West’s emblematic poet playwright, is justification for murder! Contrary to current discourse, there have long been vast swathes of white-identified folks who deeply resent art and intellect and Valance exemplifies the worst of them. Whites who value the life of the mind have often been ridiculed by whites who don’t.

Within all this occurs a love triangle between the educated (though not arrogant) Ransome, Hallie, and Bert Barricune, who has carried a torch for the woman for years. The conflicted dynamics between the three crackles through with tangible understatement. A powerhouse Laura Hoover brings a Calamity Jane vibrancy to Hallie: a reminder that women actually held positions of power in some western locations because of their abilities, virtue and toughness. Remember that women’s suffrage came sooner to more western states than others. Hoover channels that sort of pluck.

David Tufford’s Bert is an utter vision out of the old west. Rugged, grizzled, and hard-bitten, but sweet underneath. Despite the rivalry, Bert understands that the time has come to make a decision about the Valance boys. This Ransome dude may rub him the wrong way big time but he knows in his heart he’s right. There’s something touching about the protective sense the grudging Bert has toward the man and it is played by Tufford with admirable nuance and macho charisma.

The love triangle, the advocacy for the life of the mind, and the theme of racism are all there but are not as fully registered in the drawn out John Ford film. Frankly, Compton’s script is better than the James Warner Bellah-Willis Goldbeck screenplay. This is not written to take away from the indispensability of the great Ford but his 1962 film version doesn’t cohere as tightly as this play. Therefore, Compton and director Brian P. Joyce have rescued author Johnson’s original: like right out of a western! Joyce has clearly drilled into the deep feelings, anxieties, fears and hopes of isolated people in circumstances that only a generous fate and a higher power might be able to lift above the collective resignation. What’s more is he has steeped his production in the very essence of the old west marvelously.

Joyce knows his stuff. He has a vivid eye for the grit and ruggedness of a people and of a specific point in time. The look of the TRP production itself seems lifted right out of that time! Timmy Rawerts’s Marshal Johnson is a lifelike manifestation you could imagine walking the wooden sidewalks of Fort Sumner, New Mexico on the lookout for Billy the Kid. The entire acting ensemble evokes the old west, all perfectly costumed by E. Emily Heaney. They include Joseph Homrich, Jacob Marcott, Shara Marquez, Selma Petterson, and Celia Adeline Wendt. Set designers Latoya Dennis and Sadie Ward capture the worn look of the saloon – it’s right on target. Mark Kieffer’s lighting, Jeff Musch’s sound design, music composition by Adam Conrad, and Robert J. Smith’s props reinforce the wild west spirit well.

It’s likely that after seeing the production a lot of folks will go to YouTube to hear Gene Pitney’s spine-tingling rendition of the ballad “The Man Who Shot Liberty Valance” by the incomparable Bacharach and David. Seeing the TRP production will only make hearing it again or for the first time all the more resplendent.

Note: John Ford left us with some towering westerns like The Searchers, Stagecoach, Fort Apache and the post-western, The Grapes of Wrath. If Compton’s script is ever filmed, one would hope that someone like a contemporary Ford, a George Stevens, or a Budd Boetticher would do so—someone who would keep the gore and violence to a minimum and let the characters, the period, and Compton’s structure and its spirit take the lead. Pray God Compton doesn’t do “a Tracy Letts”, who let the wrong film director derange his great play, August: Osage County.

The Man Who Shot Liberty Valance
Through June 23
Theatre in the Round Players, 245 Cedar Ave., Minneapolis
612-333-3010
www.TheatreinthRound.org