The Triumph of Tough Love – “The Miracle Worker” Shines in Osseo 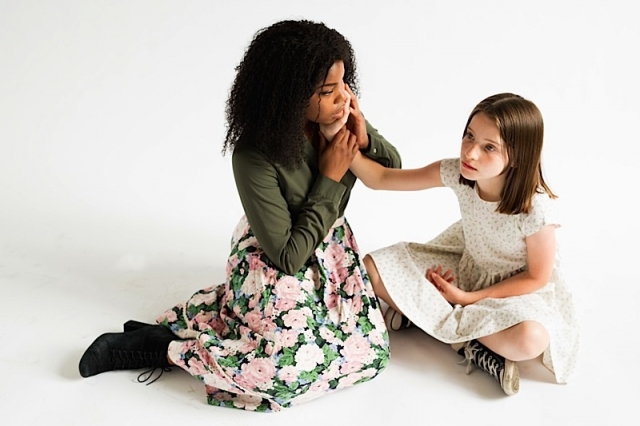 If you’re looking for a “safe space” then you’d better steer clear of Osseo’s Yellow Tree Theatre. Annie Sullivan and Helen Keller are dynamically portrayed by Kiara Jackson and Catie Bair in a mighty production of William Gibson’s The Miracle Worker. Jackson embodies Sullivan, the strict, but empathic disciplinarian teacher for the girl who would become perhaps the most renowned deaf-blind person in history.

Jackson portrays masterfully a mix of forcefulness and restraint. Today’s audiences may feel reactive or triggered by what may not be enough of the latter quality. But Gibson insists that we grapple with what is an uncomfortable proposition to many: steady firmness with few rewards, or “carrots”, if you will. Sullivan demands obedience to her method not only from Helen, but from her parents as well. Clearly, it is settled history that Sullivan succeeded.

Additionally, Jackson (an actress of color in the role of a woman who was, in actuality, white) imbues Annie with a sense of tenacious nobility, in the face of over-sensitive family members and derogatory slurs about being a “Yankee”. Nonetheless, she is adamant and uncompromising in wrestling down Helen’s unbridled feral personality which her indulgent Alabama family has not seen fit to re-direct. The result is a wild child, which young Bair embodies viscerally.  This young actress enthralls in an excitingly unpredictable performance. You don’t know what she’ll do next.

Director Patrick Coyle has guided the entire cast into beautifully shaped historical characters of the post-Reconstruction South. Casey E. Lewis and Jane Froiland, as Helen’s parents, manifest the rigid historically entrenched codes that dictated how a husband and wife were meant to interact, knowing that he is the master, and she the somewhat subservient helpmate. They vividly contrast their daughter, who seems to be physically flailing and expanding into the very space around her.

Jackson, Lewis, and Froiland find electrical moments where they dispute teaching and parenting methods. Melinda Kordich gives a warm and graceful performance as Helen’s Aunt Ev. Lewis and Lukas Levin as James Keller spar in the classic conflict wherein the father who seems to never think his son is good enough is ultimately made to face up to his hurtfully flawed assumptions. Levin is fittingly and touchingly awkward as the typical young man whose harmless intentions are too often misread by older men who’ve become jaded or oblivious to emotional nuance.

The fine period acting style inherent to The Miracle Worker text  is undercut by a scaffolding framework set design by Arina Slobodianik, rather than the look of a house of the time. It tends to distract and forces Courtney Schmitz’s lighting into a yellow wash throughout. However, Peter Morrow’s sound design, Josephine Everett’s props, and Samantha Fromm Haddow’s costumes artfully enhance the action. Matt Wall gives solid period support in the role of the doctor.