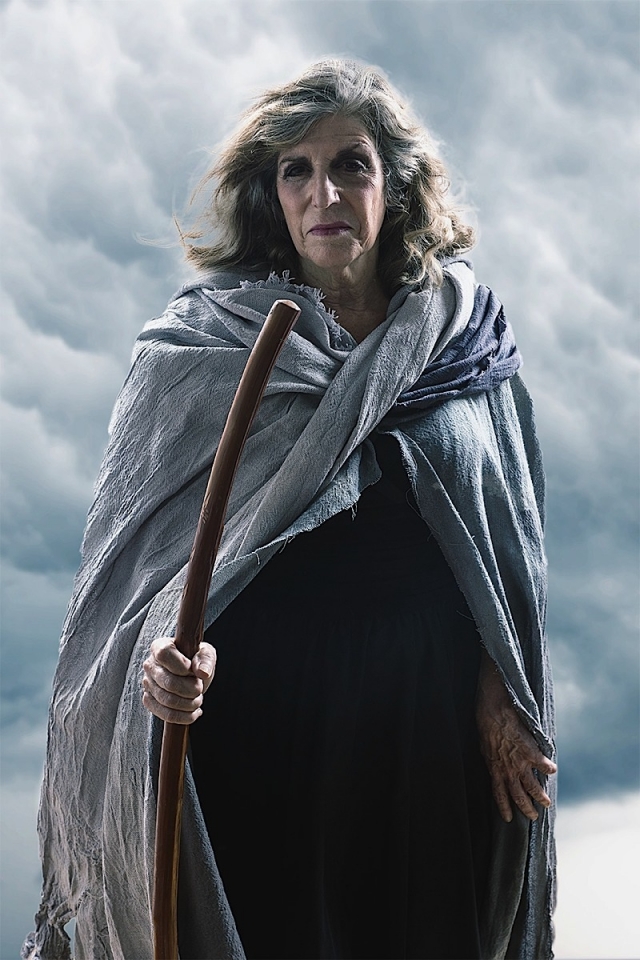 Theatre Coup d’Etat has staged a fluidly lovely production of The Tempest with an eye to the sorcery elements that infuse William Shakespeare’s fantastical late career masterwork. Some believe it was the Bard’s last play. From the first moments when three spirit characters initiate the action by streaming into the SpringHouse Ministry sanctuary with flourish, the audience is swept into a mesmerizing ensemble experience directed by James Napoleon Stone.

Meri Golden is marvelous in a crossgender turn as the play’s banished protagonist, Prospero, written as a man whose rightful title as Duke of Milan was usurped by his, now “her”, brother, Antonio (a coolly understated Brian Joyce). Golden masters the language exquisitely and probes the character’s excessive way of dwelling on wrongs done to her. She also layers into her performance a Merlin-like sense of wizardry that seems to pulse from her core into her limbs and extremities. The effect is magical.

Sue Gerver also renders a striking crossgender turn as Alonso, Queen of Naples, whom Fate and Prospero’s craft have shipwrecked and marooned on the island where the protagonist has been exiled. Alonso’s stranded associates, of whom Antonio is one, represent those who assume their city court-based approach to power as be all, end all, when the realm of chthonian nature is actually the larger reality we all live within. Shakespeare seems to posit this in The Tempest. In fact, as we see throughout his work—nature, not the court or city, is where truth and honesty are exposed, and artifice exposed. Examples: the forests of As You Like It and A Midsummer Night’s Dream. (Think of resentment so many Americans have about D.C., New York, and the big California cities not being genuinely representative of the nation as a whole. Or how some greater Minnesotans look askance at “The Cities”.) Prospero understands this. In addition, because she escaped Milan with her Magick books, she’s had twelve years to study the occult and the arcane in profound depth in connection with nature.

Here, she and her daughter Miranda (Stephanie Ruas) are served by a monstrous man she enslaves called Caliban, played with feral vulnerability and fitting vacancy by Craig Hostetler. She also calls upon spirits to do her bidding. The proverbial young lovers whose parents are at odds with each other, an element germane to Shakespearean structure, are played with darling innocence by Stephanie Ruas as Miranda and Clay Man Soo as Ferdinand, Alonso’s son. Theirs is a delightfully effervescent chemistry.

The play’s lower class subplot is staged by Stone and played with an inspired look and style reminiscent of Samuel Beckett, the seminal playwright of the Theater of the Absurd. Chelsea Wren Hanvy’s costumes reflect this uncannily with Madeleine Rowe and Kevin Fanshaw delivering madcap performances on the spare SpringHouse playing area as Stephano and Trinculo, two louts from the ship who exploit Caliban for the satisfaction of their own egos and cruelly twisted senses of humor. That said, Caliban has tempted them into staging a coup against Prospero.

The Tempest is one of those masterful scripts wherein we see the arc of characters’ lives and the circle of karma shifting toward either harmony or implosion. This is something Shakespeare did brilliantly. To see which outcome wins out, you’ll have to see the Coup d’Etat production. Although much has been cut from the original script (and you may need to read a synopsis afterwards to figure it all out), it emanates that circle wonderfully in the 100 minutes it runs without intermission.