The Reign In Spain

I joined a long line of visitors to this corner of Southwest Spain called Cáceres: Romans claimed the site in 34 B.C., followed by Moors, who protected the city with brawny stone walls spliced by towers (20 still standing) until a skirmish with the land’s Christians in 1229 ushered in the Catholic monarchs’ glory days. Their severe stone churches and princely mansions still marshal a tangle of cobblestone lanes beneath gargoyles grimacing from rooftops and ornate family crests above palatial doors; a town as unchanged since Medieval times as the cloistered nuns who sell their sweet confections behind turntables, shielded from sight and sound. 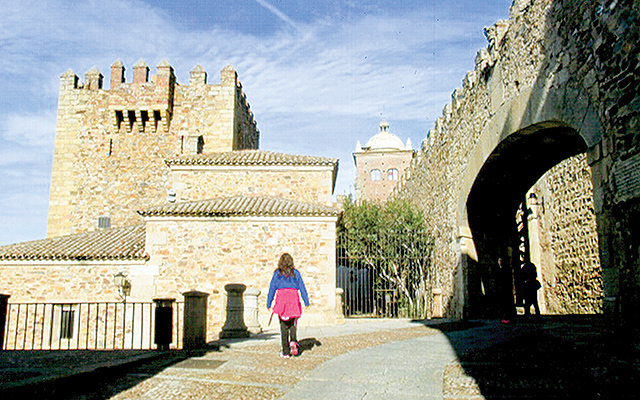 Walking along the Moorish city wall in Cáceres. Photo by Carla Waldemar

Those sweets are part of the lure of Cáceres today. The tiny town claims top honors as Spain’s 2015 Capital of Gastronomy, and it doesn’t take long to endorse that title, starting with the polished fare of the Parador de Cáceres, a hotel formed by the union of two Medieval palaces celebrating regional food and wine in its kitchen.

Thanks to its menu, I’ve become The Ham Whisperer. I was instantly seduced by the near-transparent slices of air-dried Iberian flesh at breakfast. From then on, it was nonstop jamón, climaxing in a final ultra-ham dinner: jamón-wrapped melon; jamón on toast; scrambled eggs with you-know-what, as well as croquettes, ravioli, and quiche starring the hallowed meat. In between, the kitchen devised lamb kebabs; turbot with garlic and tomato; creamy soup glorified by truffles and cod fritters; and pork (ham’s close cousin) in a sumptuous grilled acorn/Casar cheese sauce enriched with the region’s signature toasted paprika.

Then at the Palacio de los Golfines, Iberian ham and supple Torta del Casar cheese again led the menu, followed by another nod to tradition: pork with smoked paprika, sauced with more of our new favorite cheese and migas (breadcrumbs sanctified with garlic, lush olive oil, and more smoked paprika).

In contrast, Eustaquio Blanco, in his contempo new restaurant, discarded formality to best the recession by offering “goodly portions made with good products and served with lots of love.” Edible evidence: an ultra-creamy pâte of partridge adorned with dried fruit; carpaccio of pork (clearly the creature most venerated in this region); heart-stopping Torta de Casar, queen of local cheeses. Oh, and eggs scrambled with asparagus and langoustines (and those are just the starters). 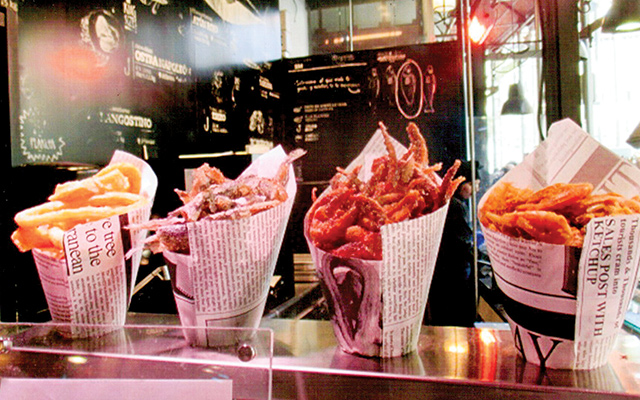 Amid the tapas bars studding the Plaza Major stands the Cayena Kitchen Club, where bantering chef Ivan Hernandez offers demo classes of a menu we’ll then enjoy at the adjoining café. He calls it “peasant cuisine”: hearty farmyard provender. I call it heaven: cold gazpacho-like soup centered with chilly cantaloupe granite, followed by caldereta, a lusty stew of the region’s famed smoked paprika, sweet peppers, and garlic (“garlic in cooking oil is the best smell in the kitchen”) seasoning lamb shanks married with twice-cooked potatoes. Coquillos, our dessert, favors wafers of deep-fried pastry rising from ice cream in a honey drizzle. (Class and lunch 50 euros; reserve at www.cayenakitchenclub.com.)

A prime reason for the city’s gastronomic award is its superior local products: cheeses, olive oil, Iberian ham, honey, wines, paprika, and cherries. Another is its rich cupboard of influences: Moors, Jews, the cuisine of neighboring Portugal, convent baking, farm fare, and Spanish flair, from traditional dishes to the cutting-edge brilliance at Atrio, a 14-room hotel carved from another former palace and home to its Michelin two-star rated restaurant run by José Polo and his husband, chef Juan Antonio Pérez. Atrio also boasts what’s hailed as the best wine cellar in all Spain: 3,400 labels, including 50 astronomically priced Mouton Rothschilds and a whole room of Chateau d’Yquem, perhaps the most-coveted wine in the world.

But we came for the food. The 13-course tasting menu segues from fake peas (crispy pork and “peas” of wasabi, butter, and cream) to Bloody Mary (tomato and green onion ice cream); from cutting-edge risotto with paper-thin mushrooms and translucent cylinder of pigs’ trotters to traditional roasted suckling goat; from our beloved Torta del Casar with quince jam and spicy oil to “The Cherry Which Is Not a Cherry (a “fruit of pasta, gelatin and liqueur”) with a “pit” of cinnamon-covered white chocolate. 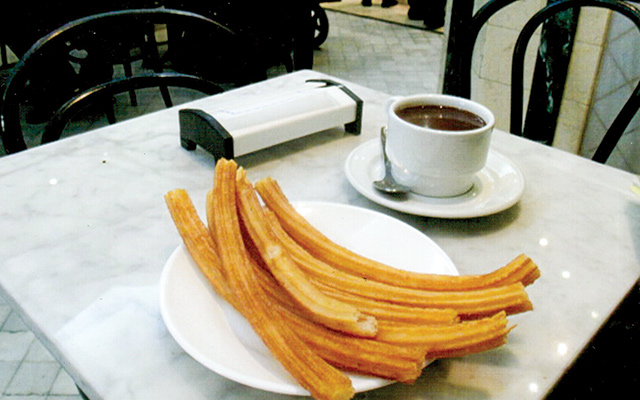 Pursuing our love of Torta to its source, we motored through the countryside to the Museo del Queso, housed in a humble shepherd’s home in a town named Casar de Caceres, then toured one of its famed cheese plants, Quesos del Casar, S.L., which transforms the milk of grass-fed sheep into rounds of ultra-creamy, slightly citric taste — spoon, then swoon.

On another journey into the countryside, we ‘ooh’ed the Los Barruecos Natural Monument: granite boulders clasping a pond where storks gather, voted 2015’s Best Spot. No argument from me, given its position aside the arresting Vostell Malpartida Museum, a textile factory-turned-haven of dramatic art installations with a socio-political credo, such as the platoons of police motorcycles representing Franco’s dictatorial regime and stacks of televisions capped with cement, a symbol of brain-dead viewers. Yoko Ono also donated a work.

En route back, we restored body and spirit at the Hotel Palacio de Arenales and Spa, via more Iberian ham croquettes (yes!); a genius, wild-card salad of pickled quail and cashews; then pork roast, this time sauced with local honey, cinnamon, and lemons.

A stroll through Cáceres reveals a feast for art lovers as well, from its grand cathedral, sporting a majestic carved wooden altarpiece and Black Christ writhing in a side chapel for over 500 years, to the synagogue-turned-chapel of St. Anthony when Jews were forced from Spain, and a 12th-century Arab home, now a museum. The futuristic Visual Arts Center, founded by Helga de Alvear in 2010, is a showcase of that connoisseur’s eye for provocative contemporary works as witness to our times. The tiny Seven Jardines combines its pleasures: coffeehouse, art gallery, live music, poetry readings, and palm trees rising from the grassy patio. Hungry for a taste? Visit www.spain.info/en and www.turismo.ayto-caceres.es/en. 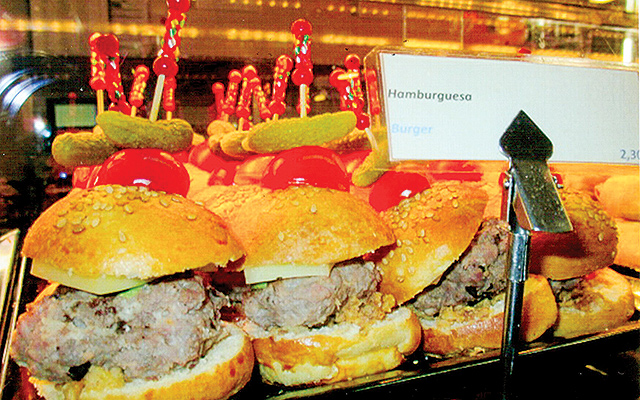 San Ginés was ready for me. It’s open 24 hours, and has been since 1894. The moment I’m off the plane, I head there for an antidote to jet lag (and anything else that ails you): hot chocolate, thick as fudge, and churros to dip.

Next, on to San Miguel, a reincarnation of a time-treasured market, today housing classy stalls selling everything from cava and caviar to mini-hamburguesas. Well-fed, I head to camera-ready Plaza Mayor (former site of bullfights and burnings at the stake, today crammed with mimes, balloons, and tapas bars). I join a free walking tour (www.madridapie.com) to explore the nearby Literary Quarter, just as Cervantes once did. We pass Restaurant Botín, harking back to 1728, when painter Goya had a day job here. I’ll return tonight for its famed suckling pig and celebrity-watching (the King dines here, as did Hemingway).

Till then, I race to my favorite museum, Thyssen-Bornemisza, collected by patrons who seem to have said “One of each, please” about every bold name in art from 13th-century Italians to Andy Warhol. Then, after a stroll in the hip and happening boys’ town called Cueca, a detour to investigate the new kid on the culture scene, the Museum of Contemporary Art (Dali onward) in the edgy Conde Duque ’hood near my bed in the Dear Hotel, whose rooftop restaurant stars a complex tomato tartare and cheesecake of sheep milk dusted with violets.

Finally, a shopping fling at El Corte Inglés, the Harrods of Spain (apply at the International Desk for a 10% discount card). Its Serrano location showcases two floors of gastronomy, including tapas curated by three of Madrid’s Michelin-starred chefs. Highlights: bacon-wrapped chicken with green chili sauce; dumplings of pigs’ ear with strawberry hoisin sauce and aioli; a “club” sandwich of ricotta and quail egg; and coconut/violet sorbet with strawberries, honey rocks, and violet marshmallows. Just say “Si.”

Speaking of fine Spanish dining: it starts on an Iberia flight. Chef Luis Bonastre (who worked with Atria’s Pérez) organizes 24,000 meals a day that make you “feel like Spain on a plane,” including free Spanish wines, even in economy. Business class fliers are spoiled with gazpacho, Iberian pork cheeks, and Torta del Casar cheese pudding among its temptations. 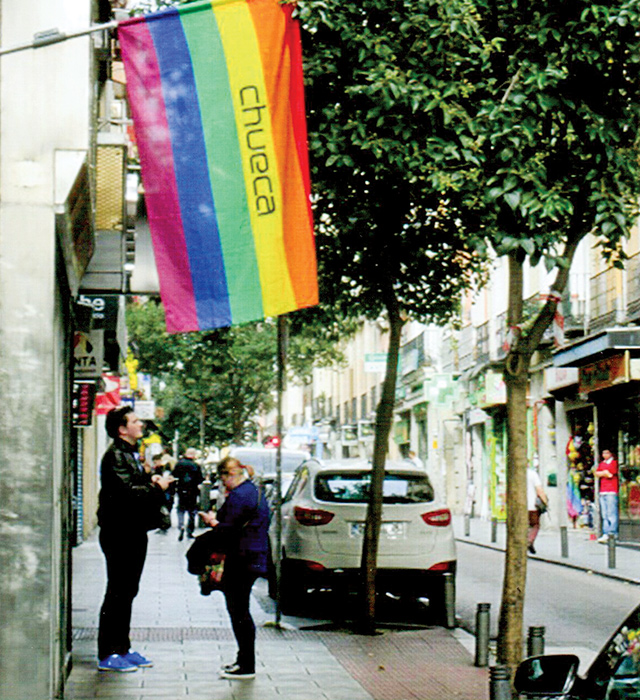 Chveca is the boys’ town hood of Madrid. Photo by Carla Waldemar

Gay Pride: Others are content to celebrate the day on June 28. Not Madrid: the festival continues well into July with parades, street stalls, sporting events, and live music taking over the city. Cueca acts as nerve center.

LesGaiCineMad: the biggest GLBT film festival in the Spanish-speaking world, along with cultural exhibitions (October-November).