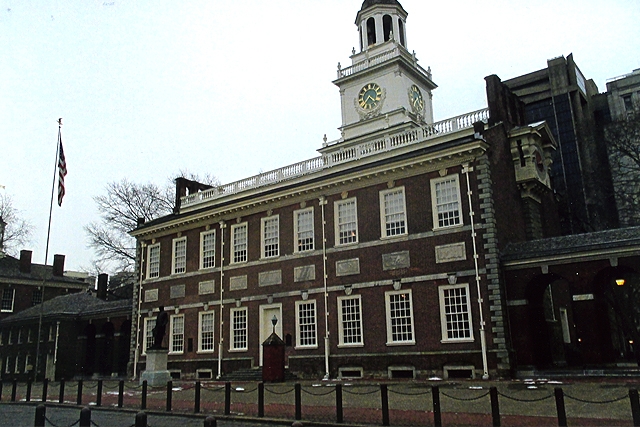 When in Philly, be sure to check out Independence Hall, the birthplace of the Declaration of Independence.

When in Philly, be sure to check out Independence Hall, the birthplace of the Declaration of Independence.

A visit to Philadelphia is like a booster shot to counteract what ails our land right now. It’s the City of Brotherly Love (as founder William Penn penned)—and the more of that, the better in these troubled times. It’s also the historic seat of our government—the ground on which our Founding Fathers severed ties with England to guarantee “life, liberty and the pursuit of happiness” to everyone. Those rights were secured only after a long and painful war of independence when 13 squabbling colonies voted the U.S. Constitution into law.

Start your visit where the USA got started, in the red-brick Historic District. Normally, that’s with a tour of Independence Hall, but it was closed in the government shutdown. So was the Liberty Bell Center, but that didn’t stop folks from peeking at our national symbol through the window and posing for selfies. It rang to “proclaim liberty throughout the land to all its inhabitants,” a plaque declares. The Washingtons and the Adamses worshiped at nearby Christ Church, where their pews are marked. Betsy Ross’s, too. (You can tour the tiny house where the seamstress boarded.) And in its weathered burial grounds Ben Franklin rests.

Here in the nation’s first capitol (and largest city), the story of its Founding Fathers unrolls with drama in the Museum of the American Revolution, a you-are-there experience delivered via films, artifacts and interactive displays that explore the challenges of Washington’s ragtag army and the squabbling within its ranks; housewives’ boycott of English goods after the Stamp Act was thrust on them (“taxation without representation” comes alive); and Paul Revere’s role (he made propaganda posters and cartoons, too). It asks the thorny question of Now What? After winning the war, how do you create a government from scratch?

The National Constitution Center weighs in on that, and on the challenges that followed, resulting in amendments giving women and black people voting rights. Interactively, don a robe to become a Supreme Court judge and weigh in on timely questions. Then vote in fantasy elections, such as Eisenhower vs. Clinton or Reagan vs. Roosevelt.

The National Liberty Museum harks back to Moses as a freedom fighter and the pilgrims’ quest for religious liberty, as well as those later arriving at Ellis Island. Ponder repros of Nelson Mandela’s cell and Anne Frank’s hideout. Peruse bios of GLBT leaders who fought for equality, plus memorials to those who aided others on 9/11 and also at the collapse of our own Minneapolis bridge. Washington invited a prominent Jew to enjoy “a government in which bigotry gives no sanction”, yet later immigration quotas and housing restrictions paid no need. What liberty, it asks?

Elfreth’s Alley, dating back to 1702—the oldest continually-occupied street in the land—displays how regular folks lived, then and still today. Its cobblestones separate two rows of narrow, brick houses (tours weekends). The neighborhood around it, fanning from Arch Street, acts as the city’s Soho, pulsing with indie shops (vintage duds to haute couture), galleries, theater and eats. Don’t miss the bakery selling gorgeous tarts from a takeaway window.

Hit nearby Market Street for New American fare at Fork, which fans hail as “reliably excellent but not flashy.” No lie, with starters like venison tartare spangled with crunchy hazelnuts and kohlrabi, or crab salad sparked with daikon and jalapenos. On to a lush mushroom risotto given textural boost with walnuts and puffed rice. Finally, a succulent quail stuffed with orange-scented spelt bread.

Next door beckons the more informal High Street (same owner), source of “the best grilled cheese ever” (hint: local Cheddar) along with baked goods to stash in your carry-on.

Finally, dinner—rather, a dining immersion—in the rich cuisine of Israel, at James Beard winner Zahav. First, a sextet of tasty vegetable salads, then choice of mezzes like roasted cauliflower (yes!), broccoli with feta and almonds or Brussels sprouts atop baba ganouj. Hummus and flatbread, steaming from the oven, wrestle for room on the table. Then choose from grilled meats (and eggplant) including my winner, duck with walnuts and pomegranates. Dessert? Definitely the malahi custard, lush with kumquats, pistachios and coffee caramel. Make your reservation this minute. Then find a flight.

You crave a Philly cheesesteak? Well, me too. I found mine at the legendary Reading Terminal Market, among 80 vendors boasting treats from Amish loaves to whole lobsters. Crowded, noisy fun!

Schooled in history by now? Devote another day to art. Make that with a Capital A, at the Philadelphia Museum of Art, fronted by those iconic steps that Rocky pounded. It’s home to Fra Angelico’s cherubs, beauties by Botticelli, a broody Rembrandt, sunny Matisse, dreamy Monet—plus a complete Indian temple, Japanese tea house and Chinese palace hall. A special exhibition, “Fabulous Fashion”, salutes the wearable art of designers from Dior to Cardin, Valentino to Vera Wang. A child next to me summed it up: “I like that one, and that one, and that one…”

Grab lunch at the museum’s fine café or that of the museum just down the street on Benjamin Franklin Parkway, “the Champs Elyssee of Philly.” The Barnes Foundation is the primo depository for all things Impressionist: 81 Renoirs, 65 Cezannes, 59 Matisses and more, much more, making one wonder if anything’s been left behind in France. (The nearby Rodin Museum currently is closed for renovation.)

To meld art and history, head to the Pennsylvania Academy of Fine Arts—the oldest in the country—where Early American painters rule: Gilbert Stuart, Benjamin West, Thomas Eakins, all the Peales. Outside, Claes Oldenburgh’s tall glass “Paintbrush” rises from the street, while inside, those famous portraits of George Washington face that of his nemesis, George III.

For art, of sorts, to take home, scamper to Antiques Row, in the heart of the Gayborhood, where Giovanni’s Room has flourished as meeting point-cum-bookstore since 1975. To plan your adventure, check out www.Visitphhilly.com and www.Uwishunu.com.